Materials and Methods: A retrospective study of 78 cases were studied for a period of 02 year from June 2018 to May 2020, where in the clinical data included age, presenting complaints, menopausal status, history of hormonal treatment, ultrasound examination.

Despite of these facts the general population is not aware of EC which is reflected by increased use of endogenous and exogenous estrogen in the treatment of post menopausal symptoms there by resulting in EC. 5, 6, 7 The two types of EC, Type-1 and Type-2 which are different in their etiology, clinical behavior and treatment modalities were originally described by Bokhman JV et al. in 1983. 8 High grade serous carcinoma are found to be less or non-responsive to usual chemotherapy. 9 One study shows that serous carcinoma forms 10% of all EC. 10

Estrogenic action unopposed by progesterone induces sequential malignant changes in the endometrium by atypical hyperplasia. Decreased expressions of estrogen receptor (ER) and progesterone receptor (PR) are observed in EC which increases in both grade and stage when compared to atypical hyperplasia. Therefore absence of ER and PR expression is important in the progression of type 1 EC. 11, 12 In type II EC, p53 mutation is common phenomenon.

Traditional histopathological classification system of endometrial hyperplasia exhibited variable degree of diagnostic reproducibility.  WHO classifications 2014 have simplified the categorization and improve the reproducibility which clearly distinguishes between clinic-pathologic entities that are managed differently. The aim of this study was to assess the role of immunohistochemical expression of ER, PR, Ki67 and p53 in EC and atypical hyperplasia.

Ethical clearance was obtained from the Institutional Ethical Committee (Letter number: BVDUMC/IEC/78E). The tissues for histopathology (surgical specimens, dilatation and curettage, biopsies) were received in the Department of Pathology. All routinely processed paraffin embedded tissue blocks and Hematoxylin and Eosin (H&E) stained slides of these 78 cases were retrieved. The slides were reviewed. Hyperplasias were re- classified as typical and atypical as per WHO classification.

IHC was performed on all cases of EC and atypical hyperplasia. The primary antibodies used were ER (Clone EP1; Dako), PR (Clone PgR636; Dako), p53 (Clone DO-7; Dako) and Ki-67 (Clone MIB-1; Dako). Section from normal breast tissue was used as positive control for ER and PR. Section from and skin and tonsil was used as positive control for p53 and Ki67 respectively. Scoring of ER, PR in EC and hyperplasia were done as positive and negative while percentage labeling index was followed for p53 and Ki67.

Total 78 cases were studied for a period of 01 year from June 2019 to May2020. There were 20 cases of EC and 58 cases of endometrial hyperplasia as seen in Table 1. EC was most commonly seen in sixth to seventh decade and hyperplasia was seen in fourth to fifth decade (Table 2).

Distribution of ER, PR and p53 in variousendometrial lesions 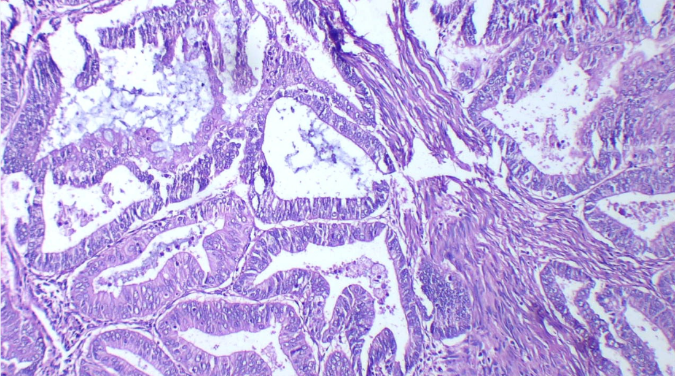 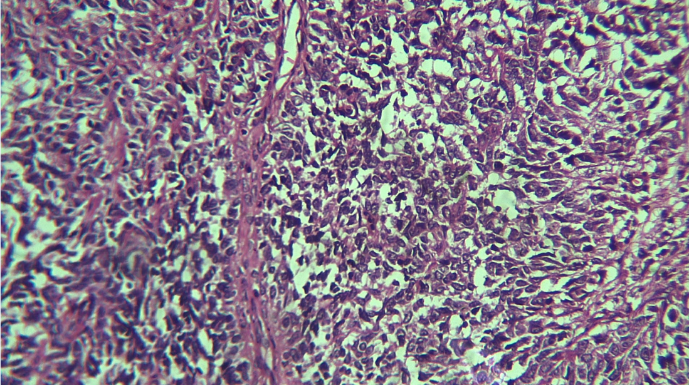 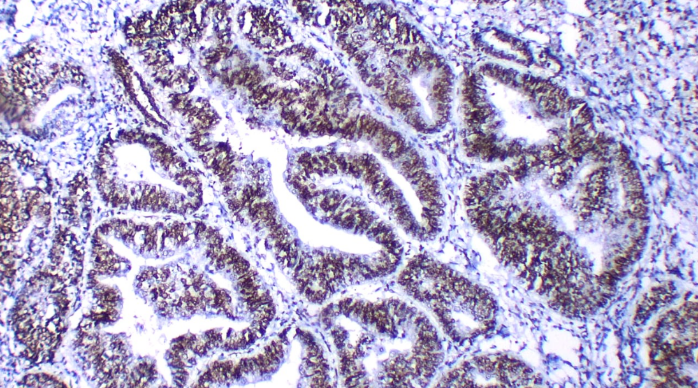 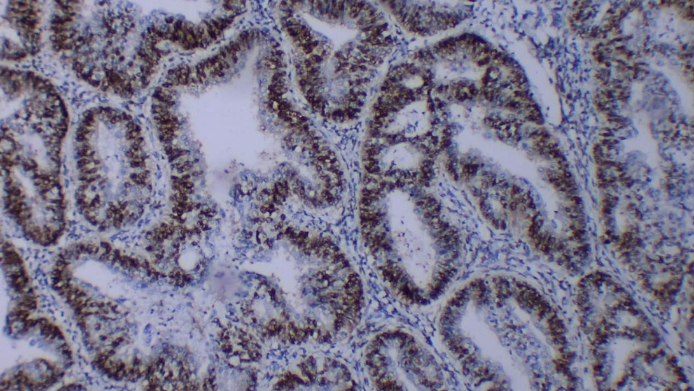 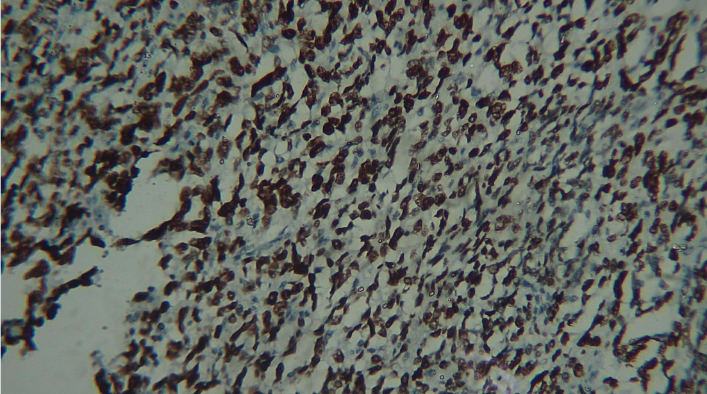 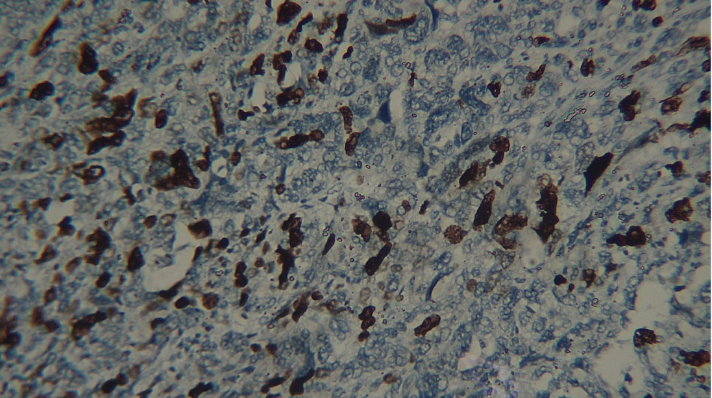 The molecular classification of EC that has emerged from the Cancer Genome Atlas (TCGA) study provides additional potentially superior prognostic information to traditional histologic typing and grading. This classifier does not, however, replace clinicopathologic risk assessment based on parameters other than histopathology type and grade. 15, 16

ER and PR receptors and functions

ER and PR belong to the nuclear receptor superfamily. They are ligand-dependent transcriptional factors, which can bind to different DNA sites to initiate the expression of specific genes. ER exists in 2 isoforms, ER-α and ER-β which have a distinct pattern of expression in the tissues, 13 that varies during cellular proliferation and differentiation. 14, 17

Progesterone receptor (PR) also has 2 isoforms PR-A and PR-B which are functionally distinct transcription factors. 18 According to the literature the transcription of PR gene is induced by estrogen and inhibited by progesterone in the majority of estrogen responsive cells, so the expression of ER and PR is considered to be coordinated. 19, 20

ER and PR in endometrial carcinoma

ER and PR status relationship with disease progression and prognosis

Molecular tumor classification, which includes PR and ER expression, is an integral part of the EC. Five-year survival rate (stage I) and median survival time (stages II-IV, recurrences) for patients with ER+/PR+ and ER-/PR+ EC i.e. PR+ were reported to be significantly better than for ER-/PR- and ER+/PR- i.e. PR- patients.28 Thus, PR/ER immunohistochemistry appears to be a reliable means for predicting survival in EC, independent of other clinicopathological parameters.29

In the present study, 58 cases of EH and 20 cases of EC were distributed in the age range of  21-81 years. It is observed that peak incidence of endometrial hyperplasia was in fourth to fifth decade and that of EC was in the sixth decade. Commonest histomorphology was endometrioid type of adenocarcinoma in 17 cases followed by papillary serous carcinomas in 3 cases.

Our study correlates with various studies as seen in table number no 6 in all the variables described.30, 31, 32, 33 Our study show that grade 1 and 2 endometrial carcinomas have different ER, PR, Ki67 and p53 immunostaining profiles compared with grade 3, as also shows a significant p value of less than 0.005. Out of 20 cases of endometrial carcinomas, 15 cases showed strong expression of ER and PR indicating type 1 pathogenetic mechanism and 4 cases showed strong p53 expression which had serous papillary morphology confirming the pathogenesis of type 2 EC.34, 35

The expression of ER, PR, p 53 was compared and correlated with other studies in the literature as shown in Table 7. 31, 36, 37 One case of endometrial carcinoma in present study was negative for ER, PR and p53 (aberrant expression). These findings are clinically important, because ER/PR loss may help identify high-risk patients from presumed low-risk group for in-time and treatment. In our study, grade 1 and 2 endometrial carcinomas showed lower Ki67 index (<10- 20%) than grade 3 tumors thus Ki 67 labeling index can be closely associated with tumor grade. This fact also correlates with Canlorbe G et al.12 In study by Sirijaipracharoen et al., which included 108 patients, ER, PR and HER-2/neu expression were positive in 59.3%, 65.7% and 2.8% respectively. 38

The p value for expression in our study for ER, PR, p53 and Ki67 was statistically significant for hyperplasia versus EC (Table 6, Table 7).

High ER, PR expression along with low p53 was more in type 1 endometrial carcinomas compared to low or absent ER, PR along with strong p53 expression in papillary serous carcinoma (Type 2) confirming the different pathogenetic mechanism for both.