Aims and Background: Papillary thyroid carcinoma is the most frequent subtype of thyroid carcinoma and usually has a favorable prognosis, however, locoregional metastases are reported in approximately 5-20% of the cases. Literature reports that when using a combination of ultrasound, fine needle aspiration and tissue thyroglobulin levels to diagnose metastases, sensitivity and specificity radically increase. The aim of this study was to validate tissue thyroglobulin measurement in local patients and compare these results to radiological and histopathological diagnosis.

Materials and Methods: A cross-sectional study was carried out to measure tissue thyroglobulin levels in lymph nodes obtained by fine needle aspiration and/or biopsy from patients with adenopathy suspected of metastatic papillary thyroid carcinoma. Tissue thyroglobulin was measured by chemiluminescence and was considered positive for metastatic papillary thyroid carcinoma when levels were ≥ 1.7 ng / mL in patients with a history of thyroidectomy and > 36 ng/mL in patients without a history of thyroidectomy (4).

Results: Our results confirm that the measurement of TTG by chemiluminescence can be made from the same tissue sample, giving the patient and the clinician greater diagnostic certainty.

Conclusions: TTG measurement through chemiluminescence is a low-cost technique that can improve diagnostic performance of pathological analysis. Levels can be measured from the same needle used in cytology/biopsy providing both the patient and clinician greater diagnostic certainty, increasing the diagnostic sensitivity and specificity of the procedure without the need for further invasive interventions.

Key Message: TTG measurement through chemiluminescence is a low-cost technique that can improve diagnostic performance of pathological analysis.

Well differentiated thyroid cancer, including papillary thyroid carcinoma (PTC), is usually considered as a disease with favorable prognosis. However, locoregional metastases have been reported in approximately 5-20% of the cases.1 Traditionally, for thyroid nodule diagnosis, assessment of recurrence and metastases evaluation, ultrasound is the initial recommended study.2 It has an estimated sensitivity of 34.5% and specificity of 73.5%. Furthermore, implementation of fine needle aspiration (FNA) as diagnostic technique has increased sensitivity up to 75% and specificity up to 93.5%. In some cases, FNA is not diagnostic due to the presence of cystic metastases that provide insufficient sample in order to give a definitive diagnosis. In that regard, some authors wash the needle and measure levels of thyroglobulin (Tg) in the FNA sample. When used these combined tests, the reported sensitivity and specificity reaches 100%.1 This is the first study that verifies the validation of tissue Tg (TTG) in Colombia and Latin America, comparing radiology results, washout TTG and pathological diagnosis of FNA and/or lymph node biopsy.

A cross-sectional study was conducted in the pathology specimens obtained from all patients who underwent FNA and/or lymph node biopsy for suspicious metastatic PTC at the University Hospital Fundación Santa Fe de Bogotá between April 2015 and May 2016. This project was approved by the ethics committee of the University Hospital.

Abnormal ultrasound criteria included at least one of the following: microcalcifications, cystic changes, hyperechoic cortex, round shape and irregular margins.3 The radiologist performed ultrasound-guided FNA and/or lymph node biopsy.4 (iU22 or HDI 5000, Philips Medical Systems, Bothell, WA). Aspiration was done vacuuming with a 22-gauge needle connected to a 10 mL syringe, material was immediately smeared and fixed in 95% alcohol. If a biopsy was performed, the tissue was immediately fixed in 10% buffered formalin. As soon as both FNA and/or lymph node biopsy were completed, the needle used for the procedure was washed with 1 cc of normal saline solution and sent for Tg measurement by chemiluminescence (Beckman Coulter). TTG levels were consider suspicious for metastatic PTC when results were ≥ 1.7 ng/mL in patients with thyroidectomy history, and > 36 ng/mL in patients without thyroidectomy history.4 FNA and/or lymph node biopsy results were divided into the following diagnostic categories: benign, positive for metastatic malignancies and unsatisfactory (no representation of sampled tissue). Results were compared with follow up resection tissue when the patients underwent additional surgery.

The Kappa index was excellent (k=0,846) when comparing pathologic findings Vs TTG. However, 3 cases had TTG levels which were discordant with the pathologic diagnosis. Two of these cases had a positive pathologic category but a negative TTG. In one of them, the resection specimen confirmed a Thyroid Anaplastic Carcinoma, an entity that is a high-grade primary thyroid tumor that loses thyroglobulin expression (Table 5 and Figure 1 A and B). The second discordant case was a false negative cytology consisting of a lymph node FNA the showed only cystic changes, with no epithelial representation; however, due to the correlation made between the TTG level (43,3 ng/mL) and the ultrasound findings, the case was ultimately signed as positive (Table 5, Figure 1, C and D). The third case corresponded to a soft tissue neoplasm located in the neck, which was positive for neoplasia but negative for TTG because it was not of thyroid origin (Table 5 and Figure 1, E and F). 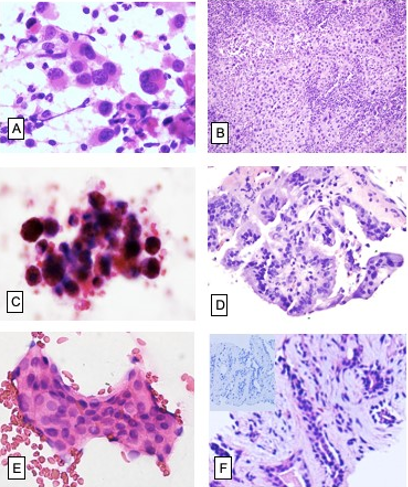 PTC can present loco-regional metastases in up to 20% of cases.3 The presence of metastases is considered as a poor prognosis factor and an indication for lymph node dissection.5 Tumor recurrence occurs commonly in the neck where ultrasonography is a sensitive method to identify small early recurrences, but it is not very specific.6 When pathology is analyzed including TTG measurement, specificity and sensitivity rise up to 100% in detecting malignancy.7 Considering that the study of PTC is based primarily on morphological and clinical basis, we hereby present evidence that shows that a combined analysis of cytology/biopsy together with TTG levels can enhance the diagnostic performance of our institution when applied as a complement to the current methodology. Although the number of samples is limited, pathology and TTG concordance for the diagnosis of metastatic PTC was excellent (K=0, 846).

Pathologist as well as physicians must be aware of some considerations. According to the literature false positive TTG are commonly described in lymph nodes with central location,8 where it is difficult to distinguish compromised nodes from residual thyroid tissue after total or partial thyroidectomy.9 In our series we did not find cases located in the central compartment. Also, cystic metastatic PTC is common, and in these cases, it can be challenging to obtain adequate cytologic material because the follicular epithelium can often be insufficient. In our cases, 3 out of 13 positive cases had CC confirmed by surgical resection, none of the 28 negative pathology cases had CC and only 1 of the unsatisfactory cases had CC, which was ultimately confirmed as positive for metastatic carcinoma with the aid of a positive TTG result. Reviewing the literature, false positive TTG cases have been reported in patients with anti-Tg or high sTg levels. In our study, levels of anti-Tg and sTg did not show interference with concordance in neither positive, negative or unsatisfactory cases.6

TTG is useful to reduce false negative cytology results, however, it is important to be aware that in the case a false positive cytology with negative TTG levels, there must be clinical correlation. This is shown by one of our cases which resulted in an anaplastic thyroid carcinoma diagnosis. This tumor usually loses TTG expression and can give us a false negative TTG, therefore, clinical correlation between images, sTg and a reviewing of the corresponding cytology can aid differential diagnosis.10

Negative levels of TTG in patients with no history of PTC or malignancy different from well differentiated thyroid carcinoma can reassure the clinician and the patient. In our series we found two cases with negative node cytology (jugular and supraclavicular) and TTG levels. These two cases revealed granulomas, one of them showing necrosis with positive ZN staining. One relevant limitation of this study is that the patients with a negative diagnosis for nodal compromise did not have indication for a follow up resection, therefore we could not compare these results to a resection piece.

In conclusion, TTG measurement through chemiluminescence is a low-cost technique that can improve diagnostic performance of pathological analysis. Levels can be measured from the same needle used in cytology/biopsy providing both the patient and clinician greater diagnostic certainty, increasing the diagnostic sensitivity and specificity of the procedure without the need for further invasive interventions. Among methodological considerations, in order to quantify a correct TTG level in tissue, it is essential to corroborate the validation of the TTG measurement in the laboratory so one can ensure certainty, precision and reproducibility of the study. We recommend that cytology or biopsy is performed simultaneously to TTG, ensuring that the washout is done immediately after the smears and the FNA so levels can be correlated with pathologic findings.