Akhtar, Warsi, Talat, and Talha: Spindle cell carcinoma of the parotid- A rare case entity with review of literature

The cell of origin of the sarcomatoid tumours have been a matter of debate, though in recent times the conventional squamous carcinoma and the spindle cell component have been postulated to arise from a single stem cell. 3 Spindle cell carcinoma is considered to be a monoclonal epithelial neoplasm with the sarcomatous component derived from squamous epithelium with divergent mesenchymal differentiation. 2 We describe an unusual parotid spindle cell carcinoma with review of literature of this rare lesion.

A 54-year-old man presented to the ENT clinics with a 6-month history of swelling in the right parotid gland region. The patient had a history of smoking and alcoholism for 30 years. The oropharyngeal examination was normal with no other mass lesion in his neck and no facial nerve dysfunction. Chest radiographs, complete blood counts and serum chemistry were within normal limits. Computed tomographic scan of the neck revealed a 4 x3 cm, irregular hypoechoic mass in the superior lobe of the right parotid gland without any deep lobe involvement. No obvious nodal involvement was also made out.

Fine-needle aspiration of the mass was performed which showed dyscohesive clusters of pleomorphic, round to oval to plump cells admixed with atypical polygonal cells (Figure 1). A right total parotidectomy with right upper node neck dissection was performed taking care to preserve the branches of the facial nerve. The post operative period of the patient was uneventful except for minimal facial paresis which improved subsequently.

The patient was given adjuvant therapy with 50 Gy of Co-60 teletherapy and six cycles of combination chemotherapy of Vincristine 50 mg/m2, Adriamycin 25mg/m2 and Cisplatinum 50 mg/m2. Our patient is alive and well with no clinical or radiological evidence of recurrence or metastatic disease after 12 months of follow up period. 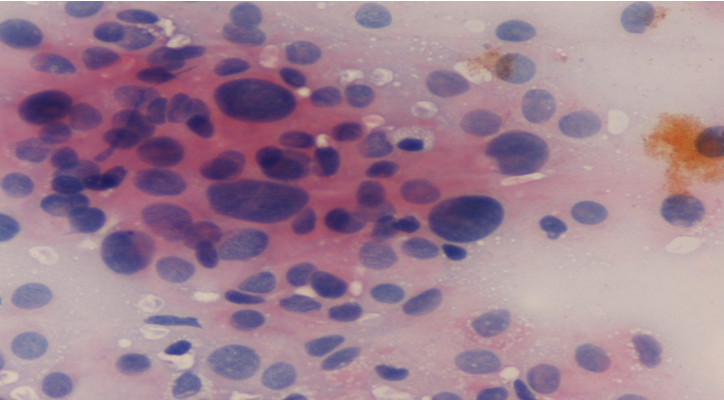 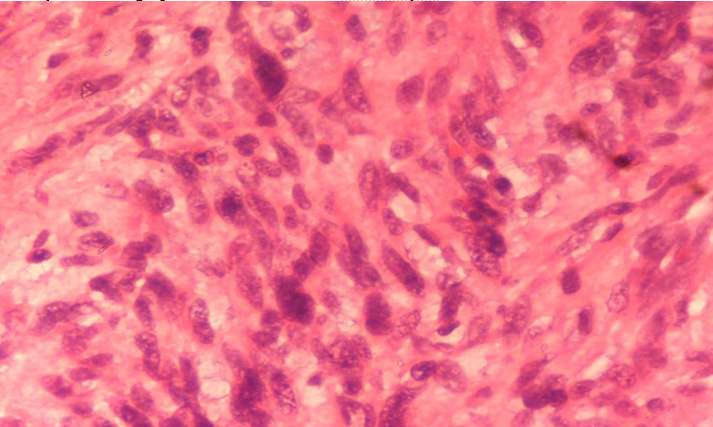 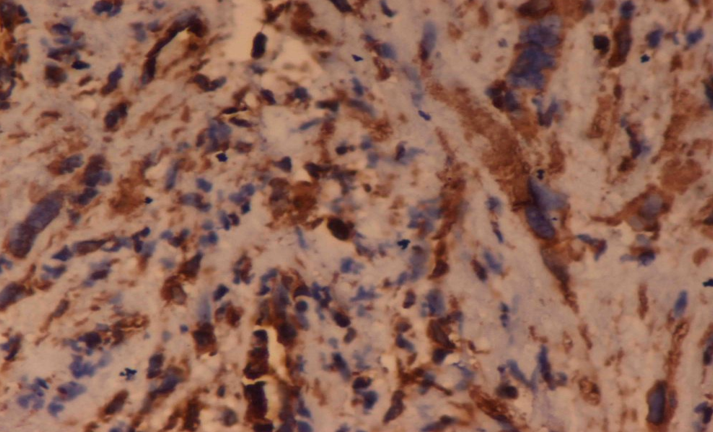 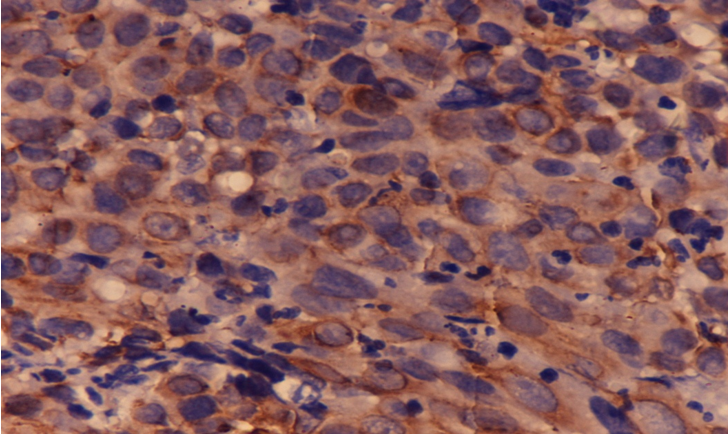 Spindle cell carcinoma of the salivary gland is an extremely rare tumor. 4, 5 In this biphasic tumor, the epithelial and mesenchymal components are admixed with each other, as seen in our case. These tumors mostly involve the parotid glands followed by submandibular glands and the hard palate. 6

It is an aggressive, high-grade neoplasm with frequent metastasis.1 It constitutes approximately 12.0% of malignant salivary gland tumors.1, 7 Usually seen in the 6th and 7th decades of life with a male to female ratio of 12:1.4 Several theories show a multifactorial causation of the disease with a strong association with cigarette smoking, alcohol abuse and ionizing radiation with the radiation risk complicated by the dose and duration of exposure.3 Most of the cases are seen to arise in a pre-existing benign mixed tumor. 6 Volker et al put forward the hypothesis of common stem cell monoclonal origin of spindle cell carcinoma that could be the myoepithelial cell and an inactivated tumor suppressor gene on chromosome 17 other than p53.5

Sarcomas such as rhabdomyosarcoma or neurosarcoma show positivity for S-100 and HMB-45 with characteristic features on electron microscopy.10, 11 Fibrosarcoma has the typical herring bone histologic appearance and indistinct rough endoplasmic reticulum on ultra structural study. The possibility of an osteosarcoma could be entertained owing to the presence of bone formation with lacelike osteoid with confirmation by osteonectin expression. Malignant fibrous histiocytoma can occur in the deep soft tissues and in salivary glands with microscopic features of cellular pleomorphism and a focal storiform pattern of growth.12, 13 Since cellular pleomorphism was moderate and a storiform pattern was not prominent in our case, the overall features were felt to be inconsistent with MFH. Furthermore, spindle cell carcinomas usually have a glandular component with positivity for epithelial markers in the neoplastic cells.

Ishibashi reported a case of spindle cell carcinoma of the parotid, who had fatal recurrence after radical surgery.14 This indicates the need for adjuvant therapy in the form of radiotherapy and/or chemotherapy to decrease the incidence of recurrence. Huang et al highlighted the metastatic potential of spindle cell carcinoma of the parotid to the adjacent cervical lymph nodes, which further emphasizes the need for prompt postoperative loco-regional adjuvant therapy.15 The outcome of the patients with spindle cell carcinoma is thought to be mainly decided by the stage and the location of the tumour, much similar to their squamous cell carcinoma counterparts.16 Better understanding of the nature of sarcomatoid carcinoma could help in the selection of appropriate therapies to hinder its progression. 14