Abubaker and Sathi P P: A case of acute leukaemia with extramedullary haematopoiesis in spleen and lymph nodes

Extramedullary haematopoiesis (EMH) is usually pathological in adults and has varied causes. In adults, it occurs due to insufficient bone marrow function, ineffective erythropoiesis or stromal disorders of bone. Literature review supports that it can occur at any site. Only very few cases of EMH with leukemic infiltrates in lymph nodes have been reported so far. Here we present a similar case, which was confirmed by histomorphology and immunohistochemistry.

Extramedullary hematopoiesis (EMH) is defined as generation and development of erythroid and myeloid progenitor cells outside the bone marrow which usually presents as masses or enlargement of the affected organ. It can present at various sites. Typical sites include spleen, lymph node, liver and atypical sites include intra- spinal canal, pre- sacral region, nasopharynx, paranasal sinuses and several other sites.1 EMH can be physiological or pathological. Physiological extra medullary hematopoiesis is necessary during embryogenesis and development of foetus before bone marrow take over the function of hematopoiesis and is seen normally up to 5 weeks in a term infant.2 In adults extramedullary hematopoiesis is always pathological and this can be due to bone marrow failure, insufficient haematopoiesis and stromal bone disorders. EMH resulting from bone marrow failure is most commonly due to myeloproliferative neoplasms, commonly myelofibrosis. 3

This case is of 26-year-old female with no prior comorbidities, presented with on and off fever of 2 weeks duration, with no obvious focus of infection symptom-wise. On examination, patient had pallor. No lymph node enlargement or hepatosplenomegaly were noted. Other systems were within normal limits. Complete blood count showed normocytic normochromic anaemia, leukocytosis and thrombocytopenia. Peripheral smear examination showed blast constituting 30%. Further work up including bone marrow, immunophenotyping and diagnostic imaging studies were planned but unfortunately patient got discharged from the hospital against medical advice in clinically stable condition despite extensive counselling. Patient was under unconventional treatment for two months, following which her condition worsened and succumbed to death on the way to hospital.

An autopsy was performed which showed pale skin, congested spleen (weighing 300g) and massive hepatomegaly (weighing 4000g). Tracheobronchial tree was filled with purulent material. Lungs were pale and showed multiple abscesses. There were multiple grey white patches in esophagus and multiple enlarged matted lymph nodes in mediastinum and abdomen, largest measuring 4cm. There was perforation at the ileocaecal junction with fecal contamination of perioneum.

Reported cases of EMH in a lymph node with coexistent leukemic infiltration in the same lymph node is rare, may be because lymph nodes are rarely excised in case of leukemias.3 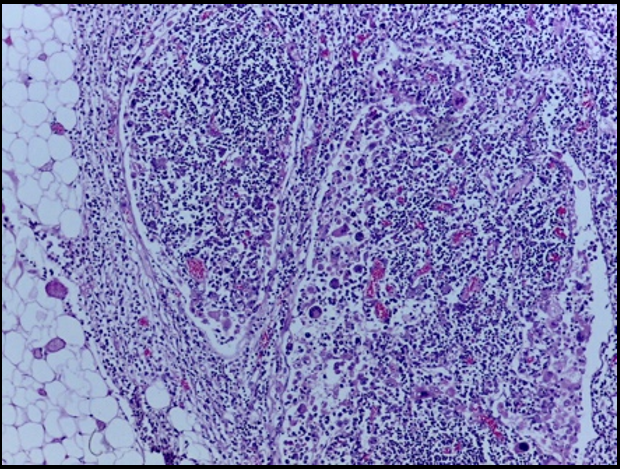 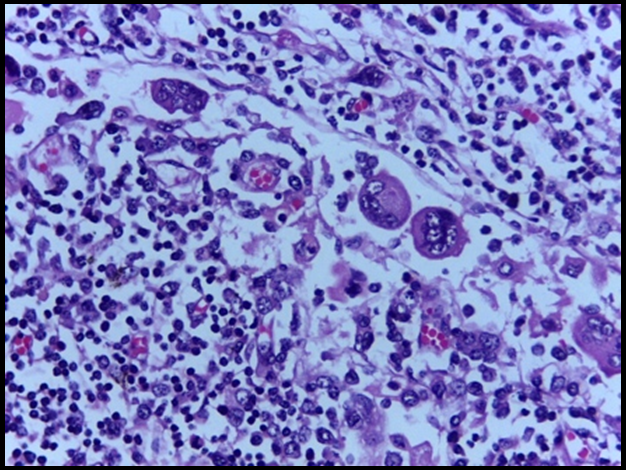 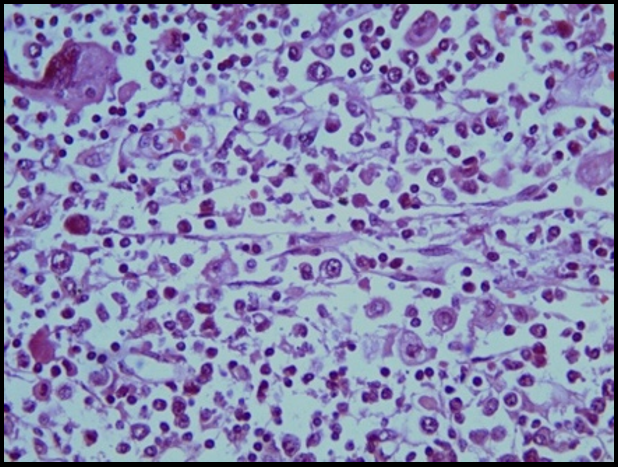 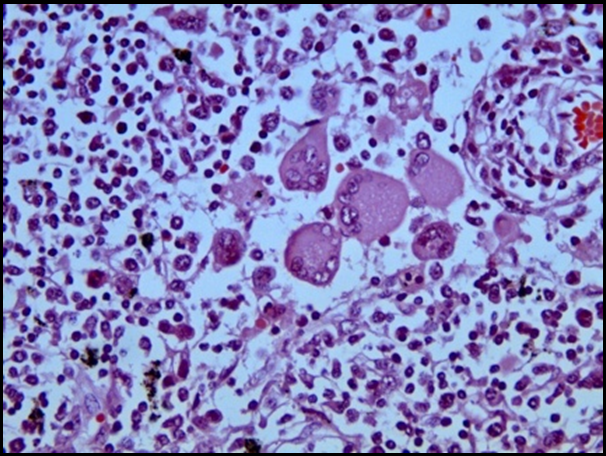 Lymphnode at 400X showing MPO positive cells within the sinuses. 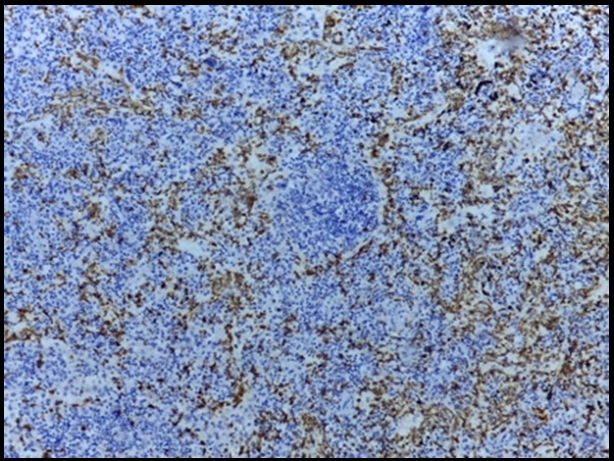 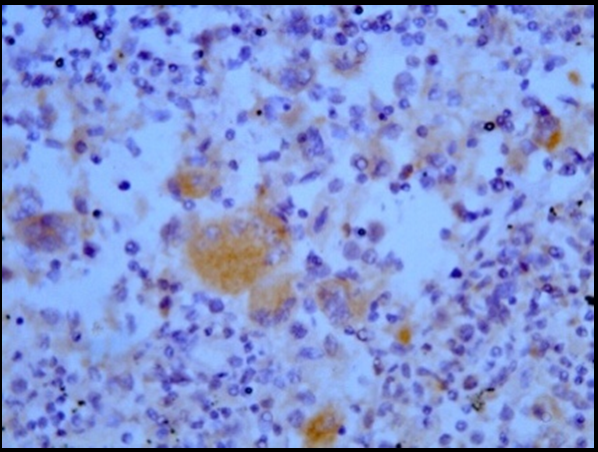 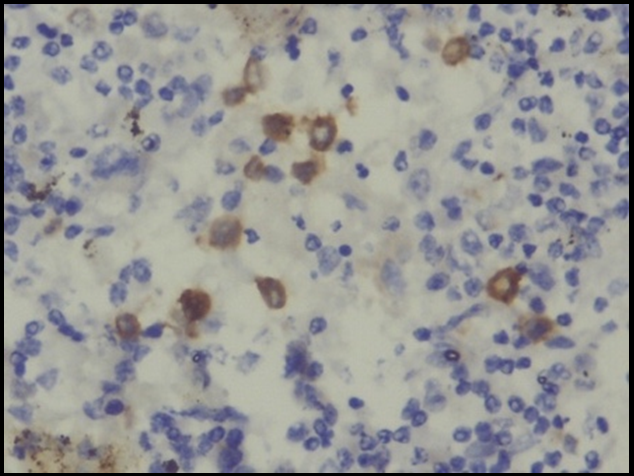 Spleen at 400X showing leukemic infiltrate in the white pulp 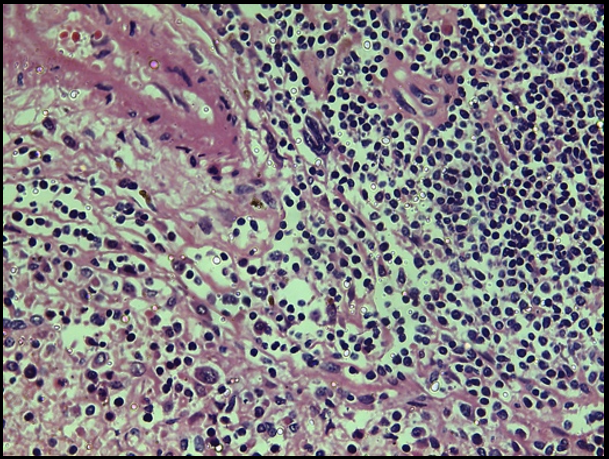 Extramedullary haematopoiesis can occur at any site and is most commonly seen in spleen and liver. Non hepatosplenic EMH (NHS-EMH) has been reported in various tissues like lymph node intra- spinal canal, pre- sacral region, nasopharynx, paranasal sinuses and several other sites.1

Reported cases of non-hepatosplenic extramedullary haematopoiesis include neoplastic cases like myeloproliferative neoplasms, myelodysplastic syndrome, AML, NHL, plasma cell neoplasm, ALL, CLL, HL, metastasis and non-neoplastic conditions like haemolytic anemia, ITP, etc. Some of EMH may not be associated with significant disease and are categorised as idiopathic EMH. On reviewing the literature, we could find only three case reports of coexistent leukaemia and extramedullary haematopoiesis in lymph nodes.3 In all patients with myeloid neoplasms, EMH needs to be distinguished from extramedullary leukemic infiltration. When the latter is found superimposed on an EMH background, it may represent disease transformation. So in our case of acute myeloid leukemia, both spleen and lymph node showed leukemic infiltration in the background of EMH. Lymph node/spleen EMH without peripheral smear report of acute leukemia will give varied differential diagnoses like Anaplastic large cell lymphoma (ALCL), Hodgkin lymphoma (HL) or metastasis. Megakaryocytes have a similar appearance to hall mark cell in ALCL, and Reed Sternberg cells of HL. And large cells in the sinuses may appear as metastasis from melanoma, nasopharyngeal carcinoma. The presence of myeloid cells and its precursors, normoblasts with absence/scarcity of eosinophils, plasma cells (polymorphous population), and absence of primary, with megakaryocytes lacking prominent nucleoli rules out these differential diagnoses.2 Immunohistochemistry also has a significant role in confirming the diagnosis. As in this case, CD61 was done and showed cytoplasmic staining of megakaryocytes and MPO showed dense positivity in the cells in sinuses. (We were not able to do cytochemistry & flow cytometry as patient was discharged against medical advice). CD117 membrane positive cells were seen within the sinuses which were morphologically consistent with blasts. Several studies have shown high specificity of CD117 for AML.4, 5 If many cells with blast morphology shows CD117 positivity we shall consider it as leukemic infiltrate with the appropriate clinical scenario. In all cases of EMH with leukemic infiltrate, cytogenetic studies to look for BCR – ABL fusion should be done to rule out CML with blast crisis.

We came across a similar case report of coexistence of leukemic infiltration and EMH in a lymph node which was diagnosed by fine needle aspiration (FNAC) of lymph node and by correlating peripheral smear finding.6 In another case report of AML with EMH in appendix, they did CD61 for megakaryocytes and blasts were positive for CD33 and CD11c.7

Extramedullary hematopoiesis in adults occurs in various circumstances and one of them is acute myeloid leukemia. Only few cases are reported as lymph node EMH with leukemic infiltrate, probably due to the fact that all leukemic cases do not undergo lymph node excision/FNAC. Without a peripheral smear correlation, it is difficult to diagnose it as EMH, since few lymphomas and metastasis can morphologically simulate EMH. Use of immunohistochemistry is helpful to alleviate the differentials.