Pelvic actinomycosis is a rare infection that is usually insidious. It has varied presentations and is often mistaken for diverticulitis, abscesses, inflammatory bowel disease, and malignant tumors. Such is the associated diagnostic dilemma, correct diagnosis is rarely established before radical surgery. We report a case of pelvic actinomycosis in a 22-year-old female who presented with an abdominal mass.

Actinomycosis is a chronic bacterial infection, caused by bacteria of the genus Actinomyces.1 Actinomyces are gram-positive bacilli, which are non-sporing absolute or facultative anaerobes. Actinomyces israelii is responsible for the majority of human infections. They are normal commensals of the human bronchial and gastrointestinal tracts and seem to only cause pathological infection after preceding mucosal breakdown.2 The most frequent site of human infection is the cervicofacial area, pelvic actinomycosis constitutes 3% of all human actinomycotic infections.3 An actinomycotic lesion may present as hard mass with induration that extends to the adjacent organs, resulting in difficult differentiation from malignancy.4

A 22-year-old female presented with complaints of on and off pain abdomen of two months duration. She also complained of burning micturition, weakness, loss of appetite, and a short history of blackish stools for one day. On abdominal examination, a hard mass was palpable in the suprapubic region, approximating a size of 18-20 weeks uterus. The mass was firm and non-tender. Clinically, an initial diagnosis of a desmoid tumour was considered. Complete blood counts revealed mild neutrophilia and elevated ESR. CA-125 was done which was within a normal range. Abdominopelvic ultrasonography done earlier at the time of onset of the pain had revealed a copper T in situ with no other significant abnormality, copper T was removed subsequently. Copper T had been placed thirty months back. CT scan done two and a half months later revealed extensive fat stranding in supravesicular region, anterior to the body of uterus along with collections in the pelvis [Figure 1a,b]. Cystitis, encasement of ureters, mild thickening of sigmoid colon, bilateral iliac, and inguinal lymphadenopathy were seen. FNAC was attempted from the mass which was inconclusive as it yielded only a few stromal fragments.

The patient was taken for surgical exploration in view of the large mass. Intra-operatively a solid intra-abdominal lesion was noted extending from rectus down to bladder and uterus. The lesion showed purulent areas, hence a sample was sent for culture and sensitivity. A fistulous communication with a bowel loop was noted. Wide excision of the lesion was done. Separation of the lesion from the urinary bladder was not completely possible, hence a small portion of the bladder wall was excised along with the lesion. Bowel fistula repair was done.

Our department received a 9.0x7.0x7.0 cms mass with an irregular external surface and attached 5.0x4.5 cms mucosa over one aspect [Figure 1c]. The cut section showed a variegated appearance with fatty areas and grey-white areas [Figure 1d]. Few friable necrotic areas were seen [Figure 1e]. Microscopy revealed dense mixed inflammation on a background of fibrofatty and dense fibrocollagenous tissue [Figure 2a]. Plenty of plasma cells, lymphoid aggregates, reactive lymphoid follicles, and few eosinophils were seen. Attached urothelium from the urinary bladder was identified with surrounding fibrosis and inflammation [Figure 2b]. At places, collections of neutrophils and histiocytes were seen along with granulation tissue. One section revealed clumps of basophilic bacteria in rosette-like configuration with eosinophilic clubs at the periphery, surrounded by a neutrophilic abscess [Figure 2c-e]. These basophilic filamentous bacteria were positive for gram's stain [Figure 2f]. The sample sent for culture did not yield any growth. 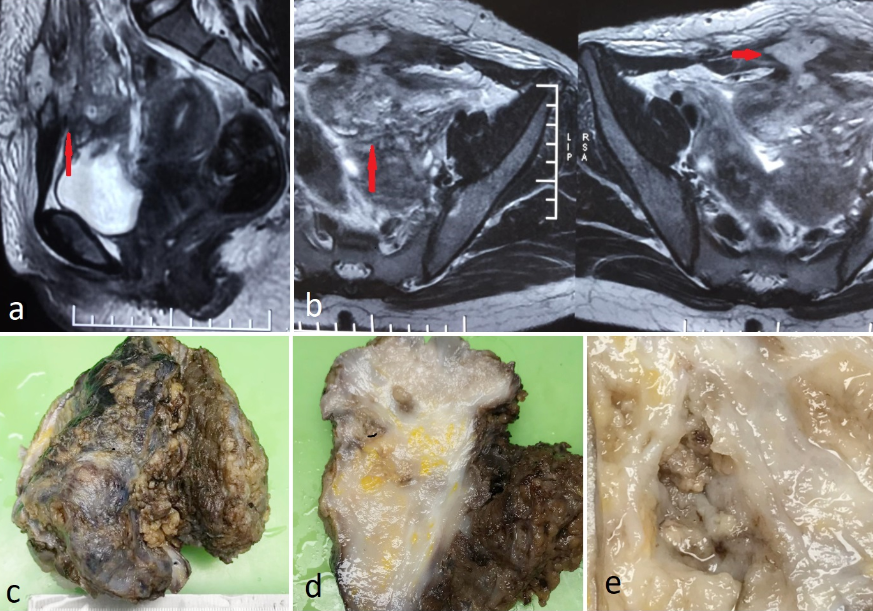 a: Photomicrograph showing lymphoplasmacytic infiltrate on a dense fibrocollagenous background, the predominant appearance on most histologic sections (H&Ex50), b: Adherent urothelium is seen with underlying lymphoid aggregate and dense fibrosis (H&Ex100), c: Bacteria in rosette-like configuration with eosinophilic clubs at the periphery (Splendore-Hoeppli phenomena), d: Clumps of bacteria with surrounding dense neutrophilic infiltrate (H&Ex200), e: Filaments of the bacteria are seen at the periphery of the clump (H&Ex400), f: Gram's stain showing gram-positive filamentous bacteria (H&Ex400) 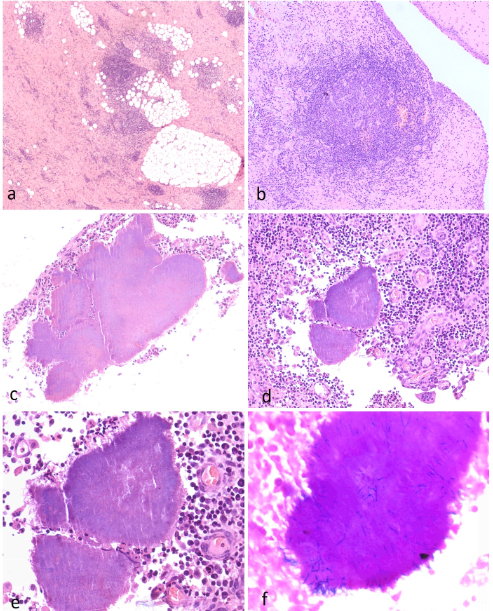 Actinomycosis is an invasive infection that frequently imitates malignant processes in various anatomical zones. Pelvic actinomycosis involves a region that is often a source of diagnostic confusion. It can affect any age group and is secondary to perforation, fistulation, Intrauterine Device (IUD), or in the presence of a tumor, among other causes.5, 6

The gold standard for diagnosis is culture from the tissue, pus, or IUD itself. Actinomyces species requires 2–3 weeks to culture and has a failure rate of more than 50%.8 Identification through sequencing of the 16S rRNA segment, which offers greater precision is another diagnostic method.5 However, failure to consider actinomycosis preoperatively and high failure rates of these tests often preclude a definitive diagnosis of pelvic actinomycosis.

According to an analysis by Alejandra Garcia et al, the most utilized diagnostic method for pelvic actinomycosis was the histopathological evaluation, which is commonly obtained after surgical intervention for a suspicious mass.5

The diagnosis of pelvic actinomycosis is challenging as it does not produce characteristic signs or symptoms. Our case presented with a mass that was found to be adherent to the urinary bladder on exploration and had a fistulous communication with the bowel. These findings attributed to the patient's bowel and bladder symptoms. The presence of a palpable hard mass, absence of fever, and the above-mentioned symptoms added to the clinical diagnostic dilemma in our case. The presence of bacterial colonies focally and only in one of the numerous sections studied further highlights the challenges in the definitive diagnosis of this entity.

Most patients can successfully be treated with antibiotics. Penicillin is the drug of choice, instances of resistance are rare. High doses of antibiotics are required to be given for a prolonged duration.9

Pelvic actinomycosis being a rare and under-reported condition is likely to be missed on an evaluation of a pelvic mass. It should be considered in the differential diagnosis of a pelvic mass in a female with an IUD in situ, irrespective of the duration of the IUD use. As highlighted in our case, a long duration of an IUD use is not a pre-requisite for the development of this infection. With a high index of suspicion for this entity preoperatively, extensive surgical intervention can be avoided along with appropriate handling of the specimen for diagnostic tests and subsequent antibiotic therapy.