Background: Ovarian cancer is the sixth most common cancer worldwide and seventh most common cause of cancer mortality. Latest WHO classification (2014) classified ovarian carcinomas into serous, mucinous, endometrioid, clear cell, Brenner, poorly differentiated / undifferentiated carcinomas and carcinosarcomas. Shih and Kurman had first proposed classifying epithelial ovarian carcinomas into Type 1 and Type 2 based on the 2 main pathways of tumorigenesis.

Objectives: To classify primary ovarian carcinomas into type 1 and type 2 based on morphology and assessment of IHC expression in different types of ovarian carcinomas. To correlate the 2 subtypes with clinical parameters and prognosis.

Materials and Methods: Retrospective observational cohort analysis of 96 cases diagnosed as primary ovarian carcinomas was done including pathologically proven primary ovarian carcinoma between April 2013 and March 2016. We collected data from hospital information system, used 5 immunohistochemical markers to classify the tumors & then followed up the patients.

Conclusion: From our study we would like to conclude that, the classification of primary ovarian carcinomas into type 1 and 2 can be done based on morphological features and immunohistochemical markers comprising ER, PR, WT1, p53 & Napsin A. Frequency data of types of tumors, stage in our population concords with that of other studies in world literature. Type 2 carcinomas showed higher patient age, more advanced stage, higher CA125 levels & comprised higher proportion of cases that underwent interval debulking (post NACT) than type 1 carcinomas. Type 2 carcinomas have both lower overall and progression free survival in our study population.

Ovarian carcinomas were conventionally classified based on morphology into different subtypes, but there is marked overlap in the behaviour and prognosis of these entities. Shih and Kurman had first proposed classifying epithelial ovarian carcinomas into Type 1 and Type 1 based on the 2 main pathways of tumorigenesis.1, 2 Type I tumors tend to be low-grade neoplasms that arise in a stepwise manner from borderline tumors whereas type II tumors are high-grade neoplasms for which morphologically recognizable precursor lesions have not been identified, so-called de novo development. As serous tumors are the most common surface epithelial tumors, low-grade serous carcinoma is the prototypic type I tumor and high grade serous carcinoma is the prototypic type II tumor. In addition to low-grade serous carcinomas, type I tumors are composed of mucinous carcinomas, endometrioid carcinomas, malignant Brenner tumors, and clear cell carcinomas. Type I tumors are associated with distinct molecular changes that are rarely found in type II tumors, such as BRAF and KRAS mutations for serous tumors, KRAS mutations for mucinous tumors, and beta-catenin and PTEN mutations and microsatellite instability for endometrioid tumors. Type II tumors include high-grade serous carcinoma, malignant mixed Mullerian tumors (carcinosarcoma),and undifferentiated carcinoma. There are very limited data on the molecular alterations associated with type II tumors except frequent p53 mutations in high-grade serous carcinomas and malignant mixed Mullerian tumors (carcinosarcomas). A panel of immunohistochemical markers can serve as surrogate markers for subtyping of these tumors. Hence, it can be used to categorize these tumors into types I & II. The main purpose of such a classification lies on the different prognostic and therapeutic implications of the 2 subtypes.

Was pathologically proven primary ovarian carcinoma between April 2013 and March 2016.

Tumor specimens with torsion, where a definite diagnosis is not possible. Blocks of tumors which were damaged, missing or of poor quality.

Sample size was calculated to be 65. A total of 99 cases were obtained for the study, out of which 96 had complete follow up details. 5 panel immunohistochemistry was performed in each of the 99 cases. Out of the 3 cases without complete follow up, 2 were of patients being treated in foreign countries and remaining single patient who died due to unrelated cause. 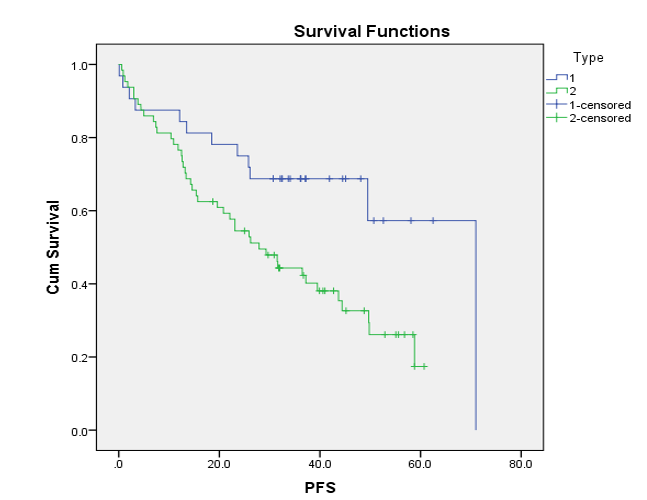 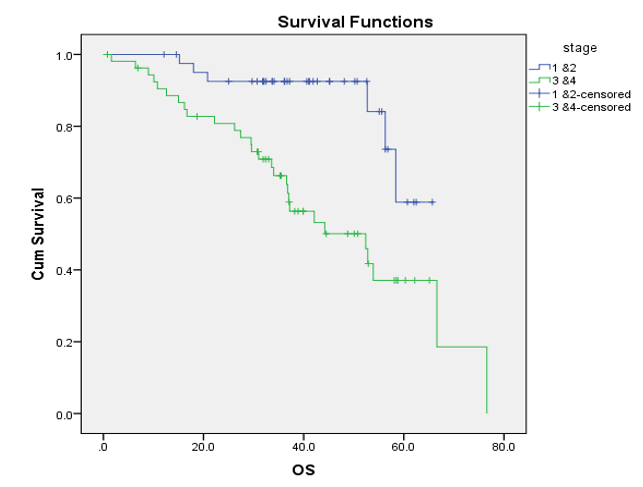 Our study highlights the importance of classifying primary ovarian carcinomas based on morphology and immunohistochemistry into different subtypes. These along with other parameters like stage, CA125 levels, residual disease post surgery, type of surgery (interval or primary debulking) can predict the prognosis & survival in these patients, which helps in better patient care.

Demographic comparison of the two groups-type 1 and type 2

More type 2 carcinomas (34.4%) underwent interval debulking (IDS) as a group compared to type 1(9.4%). Type 1 carcinomas comprised higher proportion of cases that underwent primary debulking surgery(PDS). Study by Makar AP et al showed no evidence that NACT-IDS is superior to PDS. It states that clinical status, tumor biology, and chemosensitivity should be taken into account as type 1 tumors with favorable prognosis are less chemosensitive, and omitting optimal PDS will lead to less favorable outcome. For patients with type 2 carcinoma associated with severe comorbidity or low performance status, NACT-IDS is the preferred option.

Recent articles and literature including latest WHO(2014) have indicated the relevance of immunohistochemistry to type different ovarian carcinomas. Our study maps those of already indicated values in the WHO manual. While, Napsin A was also found to be ideal for ovarian clear cell carcinomas with a sensitivity of 69.2% in comparison to 83% obtained by Yoriko Yamashita et al.12 Napsin A was found to be highly specific (100%) for ovarian clear cell carcinomas confirming. This is in accordance with this study. High grade serous carcinomas were found to express p53, either diffuse or total absent expression serves as a surrogate for Tp53 mutation. Positivity of this IHC helped differentiate high grade from low grade serous carcinoma in accordance with other studies.13, 14, 15, 16, 17 All poorly differentiated carcinomas and carcinosarcomas showed aberrant p53 expression. In carcinosarcomas, both the carcinomatous & sarcomatous components showed aberrant p53 expression. Both high and low grade serous carcinoma expressed WT1 marker, indicating a mesothelial origin for the tumors, which is the de facto surface epithelium of the ovary.

Immunohistochemistry was found to be extremely useful to categorise the tumors, and to subtype them to type I & type II. The study by Okuda T et al showed p53 mutation to affect prognosis in endometrioid cancer and not in clear cell carcinoma of ovary.19

Overall, our study confirms the findings of Shih and Kurman15, 16 based on their study on patients from John Hopkins hospital, USA and that of Sehdev et al. 32 Their studies showed prototypic type 1 tumor, LGSC to be indolent with slow progression and a 5-year survival of 55%, & prototypic type 2 tumor, HGSC to be more aggressive, with rapid progression and 5- year survival of 30%. Our study compared both progression free survival and overall survival for both type 1 and type 2 carcinomas, which showed type 2 (high grade) tumors to have much worse overall survival (p=0.042,Hazard ratio=2.593) & progression free survival (p=0.011, Hazard ratio=2.299)(Figure 1). Thus, indicating much worse prognosis for type 2 carcinomas. Study by Chen X et al7 showed overall and progression free survival durations of patients with type 1 ovarian cancer to be longer than those of patients with type 2 ovarian cancer(p<0.001,p<0.001respectively). The table which follows compares our data with that of Chex X et al,7 regarding statistical significance of the effect of type of tumor, residual post surgery and stage of disease on overall and progression free survival.

From our study we would like to conclude that, the classification of primary ovarian carcinomas into type 1 and 2 can be done based on morphological and immunohistochemical features. The immunohistochemical panel comprising ER, PR, WT1, p53 & Napsin A is apt for subtyping the primary ovarian carcinomas. Frequency data of types of tumors, stage in our population concords with that of other studies in world literature. Type 2 carcinomas showed higher patient age, more advanced stage, higher CA125 levels & comprised higher proportion of cases that underwent interval debulking (post NACT) than type 1 carcinomas. Type 2 carcinomas have both lower overall and progression free survival in our study population. Adverse factors affecting both overall and progression free survival include tumor type, suboptimal resection with residual disease post surgery (R1-R2), high stage, interval debulking type of surgery. However, the single most prognostic factor is the stage of disease.

WHO Classification of Tumors of Female Reproductive Organs, International Agency for Research on CancerLyon2014

A Gadducci Serum half life of CA 125 during early chemotherapy as an independent prognostic variable for patients with advanced epithelial ovarian cancer: results of a multicentric Italian studyGynecol Oncol19955814271006/gyno.1995.1181.

A Yemelyanova Immunohistochemical staining patterns of p53 can serve as a surrogate marker for TP53 mutations in ovarian carcinoma: an immunohistochemical and nucleotide sequencing analysisMod Pathol2011249124853