Chaturvedi and Parihar: Significance of detailed and careful morphological evaluation of organs in sepsis related deaths

Background: In this retrospective study we studied macroscopic changes and histology of various organs in sepsis related deaths in correlation with relevant clinical, laboratory and microbiology data.

Materials and Methods: Medical records and autopsy records of all patients were reviewed where final cause of death after complete macroscopic and histological examination of organs following autopsy was given as sepsis/septic shock. Sepsis related death in diabetics, hypertensives, and pregnancy related death and unnatural deaths were excluded from this study.

Conclusion: Careful and detailed morphological evaluation of various organs at autopsy is significant for both pathologist and clinicians to understand the course of events occurred and to reach an accurate diagnosis of sepsis related death.

Sepsis is a life-threatening entity caused by a dysregulated host response to infection.1 In many sepsis-related deaths the clinical information is scarcely available at autopsy, mostly due to the short duration of hospital’s stay. Autopsy pathologist, not infrequently, has to verify and uncover an uncontrolled focus of sepsis and to search for the underlying disease process that had contributed to the death. This observational study was conducted to record the frequent morphological changes in various organs in sepsis-related deaths that assist in post-mortem tissue diagnosis of sepsis.

A retrospective study was carried out over 4 years 6 months, evaluating of medical and autopsy records at a tertiary care hospital.

All the cases included in study, had the final cause of death reported as sepsis/septic shock, after a thorough macroscopic and histological examination provided by an autopsy. Sepsis-related death in patients with diabetes mellitus, hypertension, and pregnancy and those whose death was considered unnatural were excluded from this study.

The clinical impression, as given by the treating clinicians was recorded in all cases.

Thorough macroscopic examination of organs, including the brain, lungs, liver, heart, spleen, kidney, intestine, and pancreas was done to identify grossly visible septic foci. After fixation in 10% neutral buffered formalin for 24-48 hours, the slides were stained with Hematoxylin & Eosin and special stains like PAS, GMS, and Gram stain (to look for fungus and bacteria). Slides were studied for histopathological features of sepsis as documented in the literature.4, 5, 6, 7, 8, 9

All the relevant ante-mortem details and post-mortem findings of each organ system were documented.

During the study period, 1657 autopsies were performed, out of which 109 were sepsis-related deaths. Sixty-five cases (49 males, 16 females) were selected for this study after excluding cases of diabetes (22), hypertension (19), and maternal mortality (13). Most of the cases were hospitalized in a general ward. The maximum and minimum duration of hospital stay was 17 days and ≤24 hrs (30.8%), respectively. The most common age group was between 41-60 years amongst males (25 cases) and 61-80 years amongst females (6 cases).

In Table 2, Table 3, Table 4 are presented post-mortem findings of different organs, including the heart, lungs, kidney, brain, spleen, liver, and intestine. The internal organs showed both the site of sepsis and non-specific tissue alterations supposed to be sepsis-induced.

A site of infection was noted in all the cases. The lungs were the chief primary site of infection, mainly pneumonia (35.4%), and tuberculosis (7.7% cases), followed by the liver abscess (18%), renal abscess/ pyelonephritis (16.4%) and, peritonitis (16.4%). Besides the gluteal abscess, chest wall abscess, parotid abscess, epididymal-orchitis, axillary abscess, pancreatitis, cholangitis, meningitis, splenic abscess, splenic tuberculosis, intestine gangrene and fournier’s gangrene were noted as other sites of infection.

Distribution of cases according to the underlying system involved 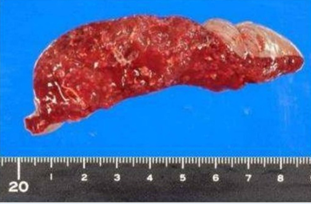 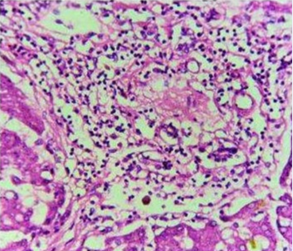 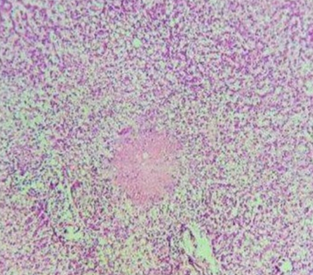 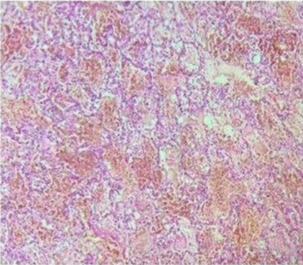 Significant post-mortem findings and complications that can cause death

The most frequent findings that contributed to death was intrapulmonary hemorrhage (33.8%), (Figure 4), acute tubular necrosis (17%), disseminated intravascular coagulation/ microthrombi (12.3%) and, acute respiratory distress syndrome (4.61%). However, p-value was not significant>0.5.

Significant co-morbidities and conditions that can contribute to death

Microbiological culture in the study group

To confirm the clinical and radiological diagnosis, multiple ante mortem samples were sent for microbiology. A total of 96 samples, taken from different sites, were studied for microbiological studies. These included 11 respiratory samples of sputum or endotracheal secretions, 36 blood samples, 14urine samples, 24 samples of peritoneal fluid, 11 samples of pus or wound swab or tissue. 54 samples (56.25%) showed positive growth. The, most significant number of positive cultures was for the urine samples (78.57%) followed by respiratory samples, including sputum and endotracheal secretions (72.73%). Significant p-value < .05 was observed in urine samples. In this study population, the commonest organism obtained on culture was Pseudomonas spp (24.07%) followed by Escherichia coli. and Klebsiella spp (20.37% each). .

In this study, sepsis-related death was seen more frequently in males (75.38%) in the age group of 41-60 years (43.08%) compared to females (24.61%) in the age group of 61-80 years.10, 11 The basis for these disparities has been postulated to relate to hormonal differences between genders. Estrogen levels and plasma cytokine imbalance may contribute to the differences in the inflammatory response and the development of sepsis. 11, 12, 13

Elderly (>60yrs) age group have been reported to be most common age group affected by sepsis. In the current study, age group affected commonly was 41-60 years. Eleven out of 28 patients (39.3%) in the age group 41-60 years had co-morbidity like chronic liver disease or chronic kidney disease or heart disease. This differential distribution in the age groups can be attributed to the chronic co-morbid medical conditions that affect the immune system (diabetes, chronic renal failure, and HIV). 14

Red pulp congestion of spleen, cerebral edema and pulmonary edema were frequently observed non specific findings that supported the autopsy diagnosis of sepsis-related death.18, 19, 20, 21 Sepsis causes imbalance between proinflammatory and antiinflammatory repsonse and microbials and their products are recognised by immune cells initiating production of cytokines and a cascade of events leading to organ damage.22

This study highlights that a detailed and careful evaluation of the morphology of various organs at autopsy plays an important role in reaching a diagnosis of sepsis-related death and to understand the pathophysiology of sepsis better.

V Y Dombrovskiy A A Martin J Sunderram H L Paz Rapid increase in hospitalization and mortality rates for severe sepsis in the United States: A trend analysis from 1993 to 2003Crit Care Med2007355124450