Spectrum of epithelial abnormalities on papanicolaou smear in postmenopausal women

Background: The Papanicolaou (Pap) smear was introduced in 1941, became the standard screening test for cervical cancer and premalignant lesions, and is being used globally.

Objectives: To estimate the frequency of various epithelial abnormalities on Pap smear in postmenopausal women and assess their relation with parity, clinical symptoms and per speculum findings.

Materials and Methods: Pap procedure was done on 400 postmenopausal women from November 2017 to June 2019 and smears were stained and cytological interpretation was made according to the 2014 Bethesda system.

Screening of Cervical cancer is known to reduce mortality by early detection and treatment.1 It is the commonest and dreaded disease of women in india.2 It can be prevented in the vast majority of women, because of the well-defined natural history and long detectable preclinical phase, the uterine cervix cancer gets priority in terms of control program through mass screening.3 Cervical cancer incidence peaks at the age of 55–59 years, older and poor women are at the highest risk of developing cancer. Most of the cases (85%) present in advanced and late stages, and more than half (63%–89%) have the regional disease at the time of presentation.

Human Papilloma Virus (HPV) is responsible for the development of abnormal cells in the cervix.4 Chances of exposer with HPV increase with the number of sexual activity and partners. There is no known way to effectively prevent transmission of this virus or treat it once it is acquired. Since HPV can remain dormant for many years, even if a woman is currently not sexually active, she may have the virus as a result of past sexual activity. In today’s era, in spite of availability of HPV vaccine and affordable and effective methods for early detection and treatment of cervical cancer still continues to be a public health problem in India. It is highly probable that cervical cancer incidence rates are an underestimate for India possibly due to under diagnosis of cases in rural areas and among most impoverished women. A regular Pap smear is the only way that women can be certain that any abnormal cells they may develop can be dealt with appropriately, so it is important to create widespread awareness about the necessity of regular screening, including the postmenopausal period.5, 6

Pap test not only plays a crucial role in the detection of cervical cancer and its precursor lesions but also aids in the diagnosis of other conditions as well such as infective and inflammatory conditions.7 Being simple, effective, and versatile, the Pap smear becomes an integral part of routine clinical examination and large population at risk can be screened. Pap smear screening has sensitivity of 50%–75% and specificity of 98%–99%.6 The mortality rate of cervical cancer can be significantly reduced if a woman is screened once when she is between the age of 40-45 years. 3

Pap procedure was done on 400 postmenopausal women from November 2017 to June 2019 who came to cytology department of our Institute for examination. Patient’s consent was taken before doing the procedure. This study was done after Institutional approval. Smears were stained with Pap and MGG stains. The cytological interpretation was made according to the 2014 Bethesda system. Inclusion criteria were; postmenopausal women attending the outpatient department presenting with excessive vaginal discharge, blood stained discharge, post coital bleeding& postmenopausal bleeding. Exclusion criteria were; abnormal vaginal bleeding with known uterine or hormonal cause, inaccessible cervix& patient with visible cervical growth.

Total of four hundred post-menopausal cases were taken during the study period.

Among all the patients 380 cases (97.4%) were symptomatic and 10 cases (2.6%) were asymptomatic. The most common presenting complain was white discharge per vaginum in 169 cases (43.4%) followed by lower abdomen pain in 142 cases (36.4%) and burning micturition, dysuria and increase frequency of micturition in 55 cases (14%). Most common presenting symptoms associated was something coming out of vaginum in which incidence of epithelial abnormalities were 30% and white discharge in which incidence of epithelial abnormalities were 23.5%.On per speculum examination, unhealthy cervices were reported in 160 cases (41.1%) patients.(Table 4)

Distribution of cases according to adequacy of specimen 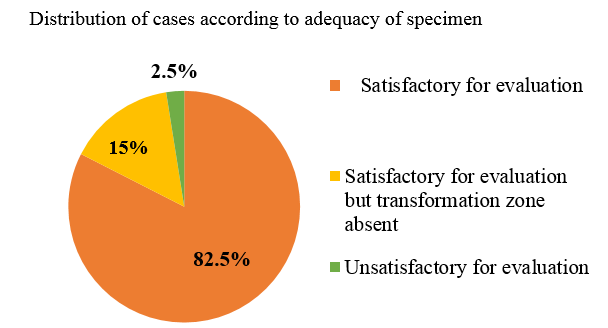 Distribution of satisfactory cases according to cytological examination

Distribution of satisfactory cases according to epithelial abnormality

Relation between epithelial abnormalities and age in satisfactory cases.

Relation between epithelial abnormalities and parity in satisfactory cases.

Relation between epithelial abnormalities and symptoms in satisfactory cases.

Comparison of cytological findings between present study and other studies

Comparison of overall incidence of each epithelial abnormality with other studies.

Comparison of presenting complain among satisfactory cases with other study.

On cytological examination 55.9% cases were reported as inflammatory and other benign condition, 26.2 % cases had normal cytology and 17.9% were diagnosed as having epithelial abnormalities, which were comparable with the study done by Chate et al8 and Shaki et al.6 (Table 5 )

LSIL and ASCUS were the most common epithelial abnormalities reported. Our finding was similar to those of Shaki et al 6 in which incidence of LSIL was 6.8%. A study conducted by Abati et al 17 states that nuclear enlargement alone is not sufficient for diagnosing ASCUS or SIL in postmenopausal cervico-vaginal smears. Nuclear enlargement in squamous cell is an expected normal reactive change that resolves with the application of local estrogen. Nuclear features are more reliable for diagnosing SIL.

HSIL was the 3rd most common abnormality reported with 4.8% incidence, a similar high incidence was seen in the study by CAKMAK B et al 13 (4.0%) and Chate et al (4.94%). 8 The recognition that HSIL is likely to progress to invasive cancer, whereas most low-grade lesion regress spontaneously, raises awareness that eradicating HSIL is critical for cancer prevention. Hence, more emphasis must be given for detecting HSIL at early stage, before it progresses to invasive cancer. The incidence of SCC was 0.8% in present study which was in concordance with the studies of Bal et al (1.3%), 11 Shashidhar et al 12 (0.64%) and Rana et al (0.6%).18 (tab-6Table 6 )

In our study, we concluded that among epithelial abnormality, 31.5% of the epithelial abnormality cases had ASCUS which came out to be much higher when compared with the study done by Bukhari et al (9.8%). 5 The incidence of LSIL in our study was 37.2% which was in concordance with the studies done by Bukhari et al (45%) 5 and Shaki et al (32.3%).6 HSIL was 27% in our study, whereas it was 21.8% in Bukhari et al 5 study and 16.3% in Shaki et al study.6 The incidence of SCC was 4.2% in present study and 13.7% in Bukhari et al study.5 Difference in incidences is due to different age and geographical area at time of presentation.

The incidence of epithelial abnormalities in women with postmenopausal bleed, something coming out per vaginum, discharge per vaginum and lower abdominal pain was 50%, 30%, 23.5% and 16% respectively in the present study (tab 4), which was similar to previous studies by Mishra et al 15 and Kaiho et al.Variations in findings in comparison with other studies may be due to differences in sample size and duration of study period. (Table 7 )

Limitations of the present study

The greatest problem faced was a lack of follow-up of patients diagnosed with epithelial abnormalities. Biopsies were not done. Few previous studies; like study by Mahadik et al 16 also faced same problems. Another limitation was possibility of false negative results which could be due to background blood, mucus and inflammatory cells causing obscuration of abnormal cells as also seen in study by Akshatha et al. 19

In present study, Incidence was seen higher in multipara and women presented with white discharge and prolapse. A higher percentage (17.9%) of epithelial abnormalities was seen in present study, maximum cases reported were of ASCUS and LSIL. Postmenopausal women are at increased risk of cervical cancer, detection of cervical cancer during the preinvasive period by screening of postmenopausal women and early intervention prevents its progression to life threatening illness. Cervical screening is one of the best defences against the development of cervical cancer, so postmenopausal patients can be offered screening whenever they visit gynaecology OPD as most of them might have never been screened & have increased risk of cervical cancer. Pap smear is a simple, affordable, feasible, accurate and safe diagnostic tool for implementation in all health care settings. Pap test has been regarded as the gold standard for cervical screening programs.