Background: Calculous cholecystitis is the most common lesion of the gallbladder. Pain abdomen is the common clinical presentation.Calculous and acalculous cholecystitis are the most common indications for cholecystectomy. Gross and microscopic examination of the gall bladder indicates the outcome of the lesions. The various histological findings will reveal the type of the disease entity and prognosis.

Conclusion: Chronic calculous cholecystitis was the most common lesion. Histopathological evaluation plays an important role in identifying the metaplastic, dysplastic and incidental carcinoma of the gallbladder.

Among the biliary tract lesions, gallbladder lesions are most common. More than 95% of the gallbladder lesions are of non-neoplastic. Calculous cholecystitis is the most common lesion in women.1 Gallbladder lesions are very common in fatty, fertile, females of around forty age group.2 In India and in western countries, the incidence of cholelithiasis is increasing due to change in lifestyle, food habits and consumption of alcohol.2 The gallstone disease prevalence is 6-12% in India and 10-15% in Western population. The disease is more common in women (9.6%) than men (3.1%)2 Cholecystectomy is the common surgical procedure for symptomatic gallstone diseaseand chronic cholecystitis. The histological examination of the cholecystectomy specimen is very essential to evaluate the disease and to rule out the malignancy.

Chronic inflammation by the gallstones is an important etiological factor in carcinogenesis.3 The incidence of carcinoma associated with gallstones varies from 0.3-12%. Histopathological analysis is mandatory to detect early diagnosis of carcinoma, premalignant lesions such as porcelain gallbladder, degenerative and metaplastic changes-dysplasia and carcinoma in situ changes.4 Metaplastic changes are in association with gallstones and chronic thickening of the gallbladder.

Routine gross and microscopic examination of cholecystectomy specimens is carried out both in symptomatic and asymptomatic cases, suspicious features in radiology or intraoperatively.

The aim of our study was to evaluate the cholecystectomy specimens of calculous cholecystitis.

Selective approach made to analyse the gross findings and microscopy of calculous cholecystitis, to evaluate the histological spectrum of changes like degenerative, dysplastic changes and to rule out malignancy.

A Retrospective study was done in the department of pathology at santhiram medical college, Nandyal, Kurnool for a period of 2 years i.e. from May 2018 to April 2020. The patients from in and around nandyal, attending to surgical department with clinical diagnosis of cholecystitis were included in the study. In the present study patients admitted with acute or chronic cholecystitis and operated were included. The clinical details were taken from the hospital records and analysed. Cholecystectomy specimens were fixed in 10% formalin. Gross examination of intact and cut opened specimens were carried out by noting the size, external and internal examination, thickness of the walls, mucosal surface, presence of gallstones, number of stones and type of stones. Routinely sections from the neck, body and fundus of the gallbladder were given. An additional section from the suspected areas were also given. After processing, H&E stained sections were examined under light microscope and thorough analysis was done. Histological findings of calculous cholecystitis specimens were noted. Detailed study of degenerative, metaplastic changes and type of histopathological lesions was done. The relevant clinical data regarding the age, sex of the patient, symptoms, ultrasonogram findings and site of biopsy, gross and microscopic findings, all the details were analysed.

All the cholecystectomy specimens of both calculous and acalulous cholecystitis with metaplastic changes were included.

During the two year study period, the total number of cholecystectomy specimens received were 120, (out of 120, number of females patients were 86 and 34 were male. 110 Cases presented with pain abdomen. Pain was colicky. The common site was right hypochondrium 83%cases followed by epigastrium 17%.2 22 cases presented with nausea, 5 cases with dyspepsia and 6 were with severe pruritus. In most of the cases, 9 cases present with diabetes mellitus and hypertension.12 cases only with diabetes and 8 with hypetension. In all the patients, the radiological and clinical diagnosis was cholelithiasis.

Among the 120 cases 86 were females and 34 were males with M:F ratio 1:2.5 Females found predominantly affected than males. The common age group affected was 20-70 years in females, 30-50 years in males. The mean age of metaplastic changes was 42-50 years.

92 cases chronic cholecystitis, in 64 cases grossly gallbladder the wall thickening was more than 3-4mm. In 36 cases oedematous congestion of walls, 20 cases with ulceration and 64 cases diffuse thickening of walls.

Among 120, 76.6% cases of chronic cholecystitis, 20 with focal ulceration and collection of lymphocytes and plasma cells in the subepithelial region. Rokitansky Aschoff sinuses noted in 6 cases (21 cases showed acalculous cholecystitis. In the subepithelium, lymphoplasmocytic infiltration noted).

In one case of eosinophilic cholecystitis, histologically abundant eosinophils along with lymphocytes, plasma cells inflammatory infiltrate in the subepithelium.

In clinical practice, the most common are gallbladder lesions and cholecystectomy is the common surgical procedure.2 In the present study, total 120 cases of cholecystectomy were studied in a two year period. The most common lesions noted are chronic calculous cholecystitis (76.6%) the most common clinical symptoms was pain abdomen 91.6% cases and the site was right hypochondrium and epigastrium.2 Similar findings observed by Ezhil Arasi et al and Bansal et al as they noted 55% and 100% of cases, Kumari et al in 99.63% of cases. Hence our study correlated with the above authors. Kumari et al observed nausea/vomiting, fever and jaundice in 27.63%, 8.36% and 2.90% cases. Bansal et al observed in 64.4%, 13.5% and 6.7% cases. Our study correlated with Bansal et al and differed with Kumari et al.

In our study the incidence of non neoplastic lesions were peak in the age range of 31-40 years with female predominance.2 Geetha kumari et al and Rakesh BH et al noted in the age group of 41-60 years.3 Our study differed from the above authors study. 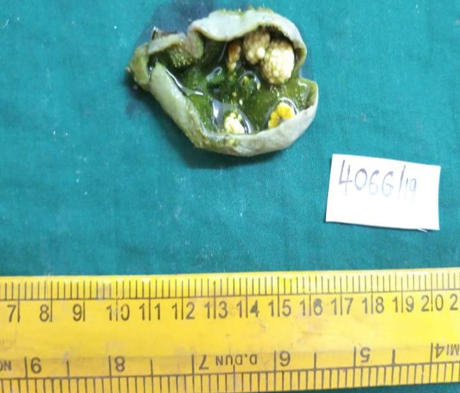 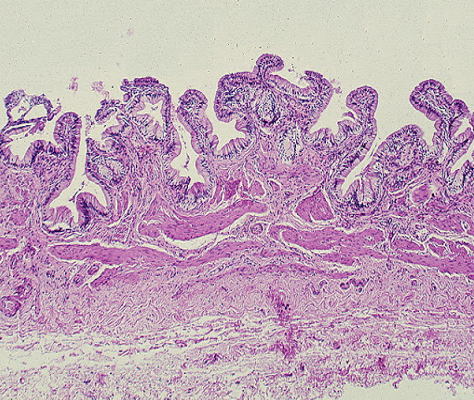 In the present study, grossly the thickness of gallbladder was between 1-3mm in 23.3% of cases and >3mm in 53.3% of cases. Our study correlated with the study of Geeta kumari et al, Ezhil Arasi et al and Sumit Giri et al.

Franco V et al documented xanthogranulomatous cholecystitis common in females of 6th and 7th decade. 4 Tyagi SP et aldocumented that the morphological changes are more common in females in the age range of 4th and 5th decade with Associated cholelithiasis in 85.3% of cases. 5 Our study correlated with the above findings.

Female gender is the risk factor for chronic calculous cholecystitis. Histopathological examination is mandatory to emphasise the spectrum of changes. Predominantly pigment stones found in the younger age. The pyloric metaplasia commonly noted in the age range of 40-50 years.