Unusual histological presentation of a residual cyst: A case report

Cystic lesions of jaws are fairly common of which radicular cysts that form as a result of inflammatory changes associated with a non-vital pulp are most frequent. The removal of source of infection by either root canal treatment or extraction of the involved tooth leads to resolution of inflammatory cysts. However, infrequently, certain lesions may persist even after appropriate treatment which are termed as ‘residual cysts’. Although residual cysts are histopathologically indistinguishable from radicular cysts, certain changes may occur owing to removal of the aggravating stimulus which may lead to a varied histopathological picture. The present case report comprises of a residual cyst with a relatively unusual histopathological presentation.

Various types of cysts develop in the jaws having either developmental or inflammatory cause that present themselves as a clinical problem for dental surgeons. Over the past years, researchers have answered questions pertaining to the etiology, pathogenesis, clinical behavior, diagnosis and treatment of the various types of cyst. Despite ample standardized descriptions and classification, unusual histopathological presentation renders certain cases as unclassifiable.1

About half of the cases of cysts of the jaws comprise of inflammatory cysts, particularly, radicular cysts.2 These form as a result of endotoxins released from an infected pulp canal followed by stimulation of epithelial rests in the periapical periodontal region of a tooth.3 Performing root canal treatment or extraction of the involved tooth is deemed as an appropriate treatment for such cases. However, at times, a cyst may persist even after removal of the source of infection or the offending tooth itself. Such retained cysts are termed as ‘residual cysts’ (RCs) that are relatively infrequent comprising of approximately 10% of all the odontogenic cysts.4

What is most perplexing is that the epithelial lining of inflammatory cysts can assume a myriad of differentiation end-points which result in corresponding variable histopathological picture. We report once such case of residual cyst displaying an unusual histopathological appearance.

A 25-year-old female reported with an asymptomatic swelling in the posterior left mandibular region which had gradually increased in size over the past two months. Past dental history of the patient revealed that the mandibular left second and third molars were extracted seven months before. The patient did not have any significant past medical history. No gross deformity or facial asymmetry could be noted extra-orally. 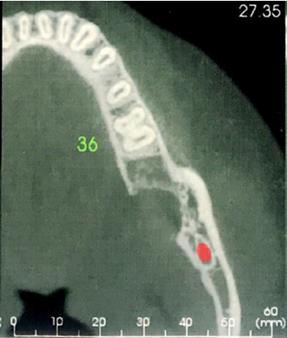 Microscopically, cystic lumen was lined by pseudostratified columnar epithelium overlying the cystic wall[Figure 2]. The underlying connective tissue capsule comprised of parallelly arrange dense bundles of collagen fibers interspersed with fibroblasts devoid of an inflammatory infiltrate. Certain areas of the lesion consisted of loose and edematous capsule towards the lumen along with foci of dense chronic inflammatory cell infiltrate chiefly comprising of lymphocytes and plasma cells. Several congested endothelial lined vascular spaces were noted along with areas of extravasation of the vascular elements. Under high power, the lining cells exhibited pseudostratification with intracellular vacuolation. Correlating the clinicoradiohistopathological features with history of extracted teeth a final diagnosis of Residual cyst was imparted. 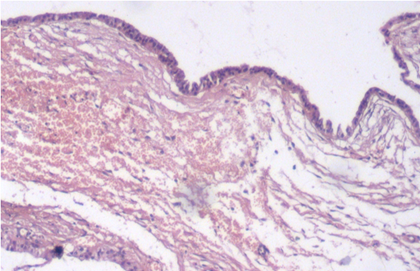 When considering nature of periapical cysts, two types of cysts have been described.3 Firstly, a periapical pocket cyst or ‘bay cyst’ communicates directly with the infected root canal and is attached only to the margins of apical foramen by means of epithelium. The second type represents ‘true’ radicular cyst which comprises of a true cystic lumen lined by epithelium throughout its perimeter. The former can be expected to resolve following removal of the source of infection. The latter can be designated as ‘self-sustaining’ and may therefore, persist even after removal of the cause and these may account for the relatively low frequency of residual cysts.5

The present case exhibited a RC that had persisted and gradually increased in size following extraction of the involved mandibular molars over a course of seven months. In contrast to infected or rapidly enlarging residual cysts, the gradually expanding lesions are generally asymptomatic and present as well-defined radiolucencies surrounded by a narrow radiopaque margin as noted in the present case.6 Although these represent well-contained nature of the cysts due to responses by the body tissues, the differential diagnosis of odontogenic keratocyst must be considered which also present in an identical manner.

The histopathological features of a RC are undoubtedly similar to a conventional radicular cyst. However, removal of the aggravating factor causes the cyst wall to become progressively less inflamed and at the same time, the epithelial lining tends to become thin and consistent closely resembling that of a dentigerous cyst or a lateral periodontal cyst.7 Thus, these differentials must be kept in mind while examining a cystic lesion and should be subsequently correlated with clinical history to rule out a developmental cyst. The regressive histopathological changes noted within a lining of residual cyst are indicative of the fact that a vast majority of RCs are slowly resolving lesions. The resolving nature of RCs closely follows removal of inflammatory stimulus which is further reinforced by cessation of epithelial proliferation and its ability to differentiate up to some extent.7

Additionally, the differentiation of lining epithelium is accompanied by certain metaplastic changes amongst which mucous metaplasia occurs most frequently. Ciliated cells with vacuolization have also been reported in the cystic lining which are suggested to represent an intermediate stage in the process of mucous metaplasia or as a result of involvement of lining of maxillary antrum.8 However, interestingly, pseudostratified ciliated epithelium has also been observed in the lining of radicular and RCs of mandible.9 This peculiar finding represents the potential of the lining epithelium to undergo ‘prosoplasia’, consequently resulting in development of pseudostratified ciliated columnar epithelium even in mandibular cystic lesions as noted in the present case.10

Thus, a pathologist must be wary of various unusual ways in which a simple inflammatory cyst may present with. The prosoplasia of lining epithelium is indicative of resolution of the inflammatory changes in the cystic wall and consequently, less aggressive nature of the lesion. Surgical enucleation with curettage was deemed as appropriate treatment for the present case, being that of a resolving cystic lesion.

Metaplastic changes in the lining of a residual cyst may add confusion to the already existing one in case if the association of lesion with the tooth is lacking. The lesion may be confused with other developmental cysts such as dentigerous cyst or odontogenic keratocyst and therefore, warrants meticulous examination of patient and elicitation of relevant history. Familiarity with possible unusual ways of presentation of cystic lining will help a pathologist in diagnosing the lesion appropriately and subsequently guiding the surgeon with respect to the treatment plan.

F Titinchi J Morkel Residual cyst of the jaws: A clinico-pathologic study of this seemingly inconspicuous lesionPLoS ONE20201512244250