Hairy cell leukemia (HCL), a rare, chronic B-cell leukemia, first described as a distinct entity in 1958, was recognized as an entity by the World Health Organization in 2008. The disease accounts for 2% of all leukemias and is more frequent in middle-aged to older men. The diagnosis is based on the hairy lymphoid cells in the peripheral smear and the bone marrow aspiration cytology and the bone marrow biopsy showing a monotonous interstitial infiltrate with a fried egg appearance. The classic immunophenotypic profile in the flow cytometry and the BRAF V600E mutation confirm the diagnosis. Herein we report a 52- year-old male patient presented with pancytopenia, high-grade fever, and weight loss. The characteristic histomorphological and the flow cytometry features of this leukemia will be used to discuss further the recent updates on the distinct clinicopathologic features, differential diagnosis, treatment, and prognosis of the entity.

HCL and HCL-like disorders like the HCL variant (HCL-V), the splenic marginal zone lymphoma(SMZL), and the splenic diffuse red pulp small B cell lymphoma (SDRPL) are a heterogeneous group of mature lymphoid B-cell disorders which are characterized by the presence of hairy/ villous cells. All these have a specific genetic profile, a different clinical course, and a different treatment strategy. So a correct diagnosis is inevitable. HCL usually presents with a triad of splenomegaly, pancytopenia, monocytopenia, and the characteristic hairy cells on peripheral smear. The BRAF V600E mutation is present in >85% of patients with classic HCL.

A 52-year-old male patient was referred to our institution to evaluate pancytopenia, with a history of high-grade fever of 2 weeks duration, not associated with chills and rigor. He had a history of loss of appetite & loss of weight (4kg over one month). He was a known case of Diabetes mellitus detected three years back.

On clinical examination, he was febrile, anemic, and had massive splenomegaly. No peripheral lymphadenopathy was detected, and all other organs were within normal limits

With the above clinical, cytomorphological, and immunophenotypic findings, the diagnosis of Hairy Cell Leukemia was made, which was confirmed by BRAFV600E mutation study.

The patient was treated with Cladribine. Minimal residual disease (MRD) analysis and peripheral smear after six months did not show neoplastic cells.

Unfortunately, one year later, the patient developed multi-drug resistant klebsiella and passed away. 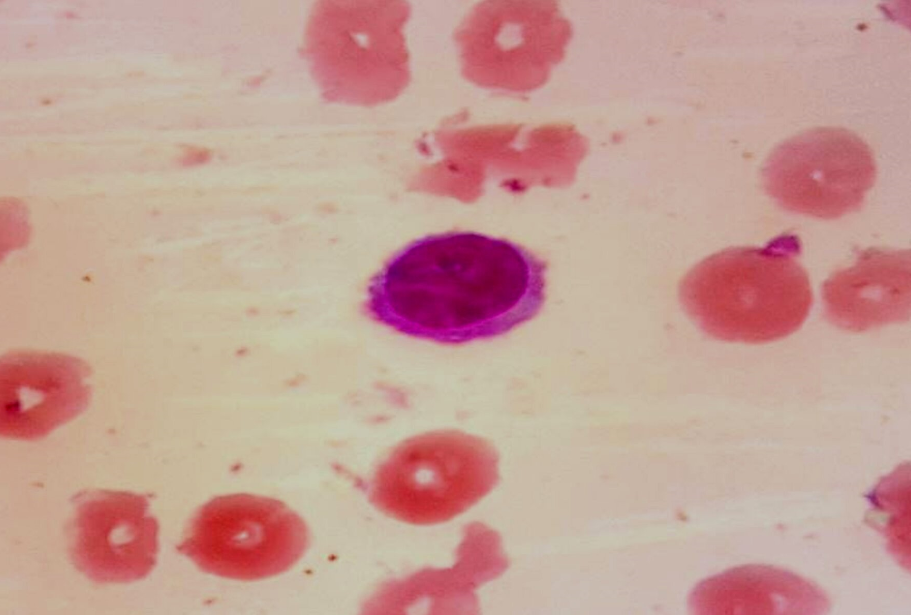 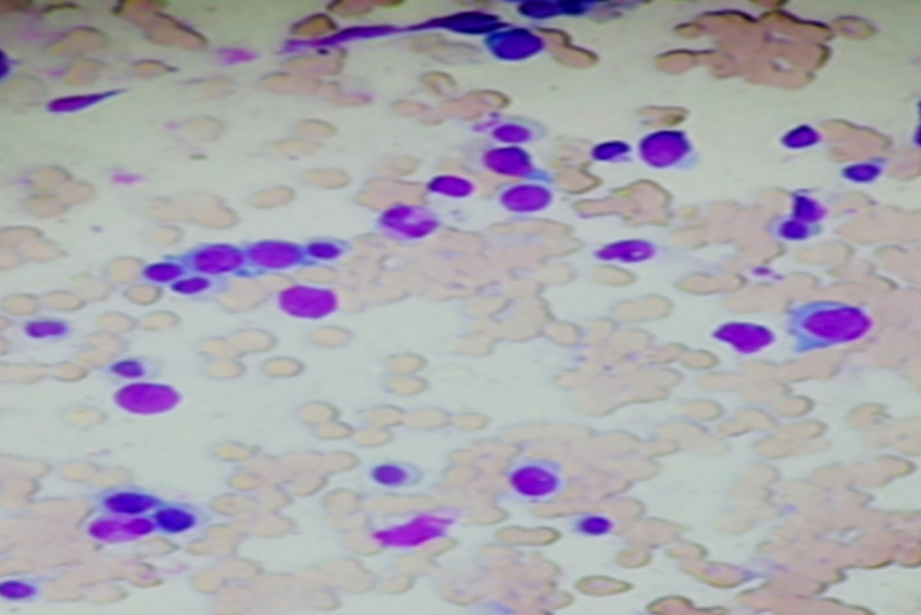 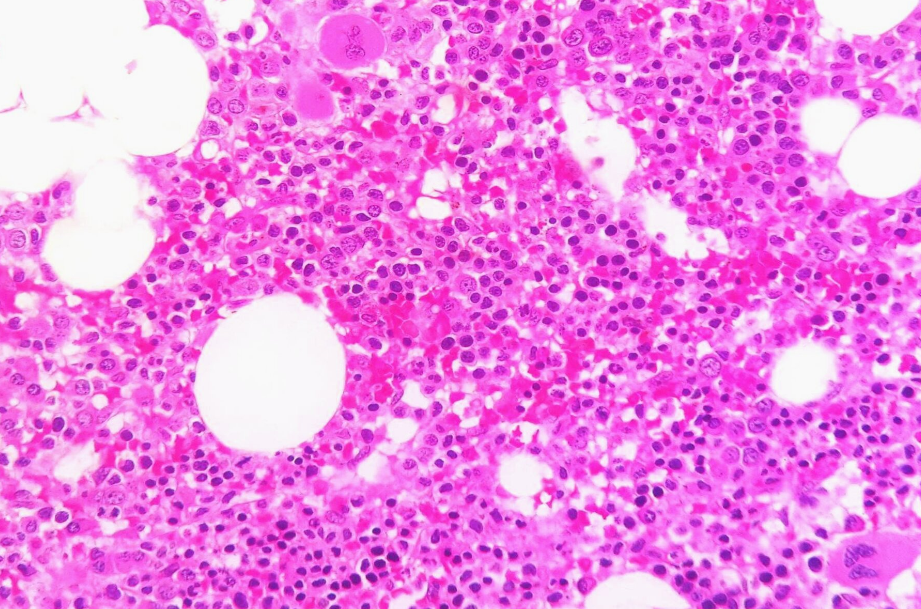 An increase in fibrosis highlighted by reticulin stain, 100x Objective 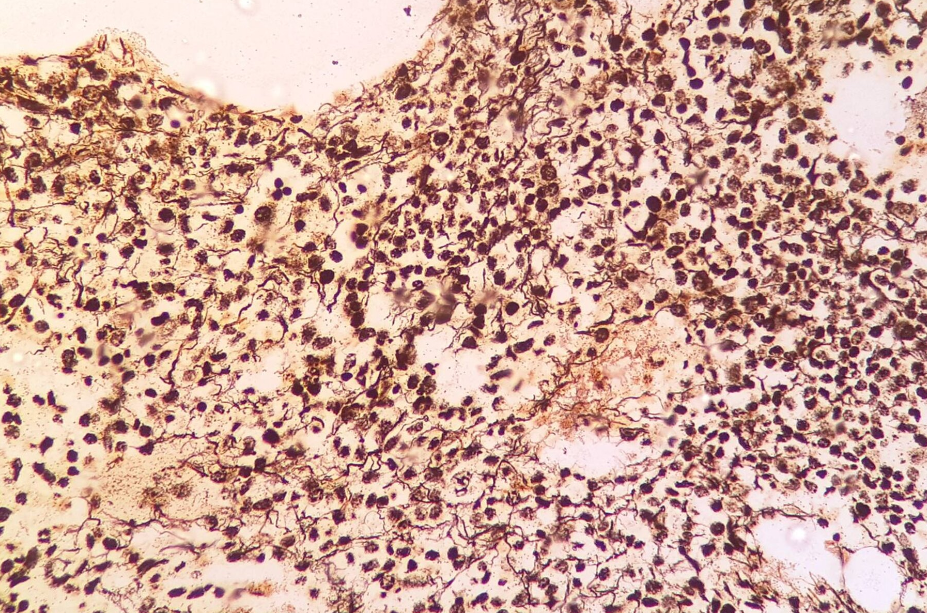 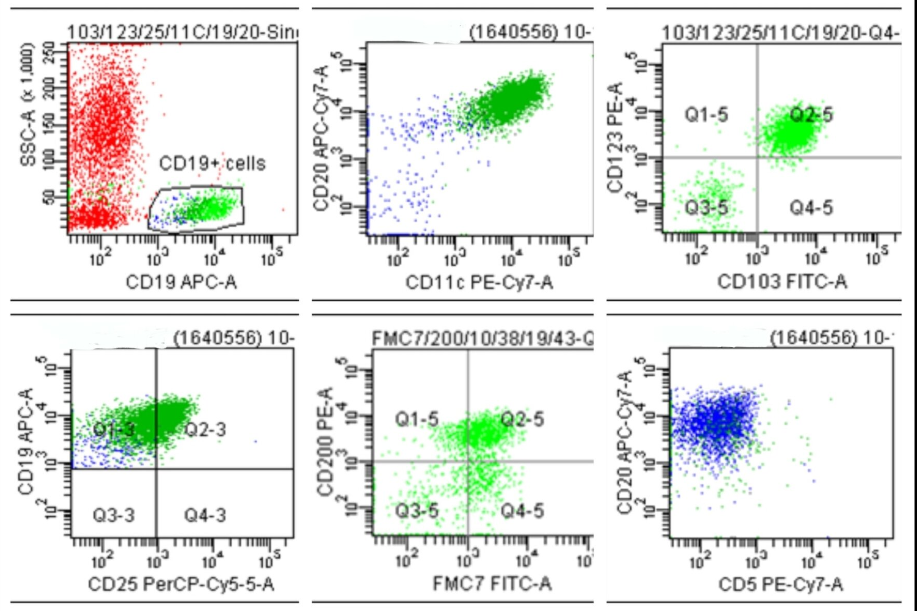 Hairy cell leukemia is an indolent neoplasm of B cell lymphoid cells with circumferential hairy projections involving peripheral blood and diffusely infiltrating the bone marrow and splenic red pulp. 1, 2 The cell of origin of HCL is possibly the late-activated post-germinal center memory B-cells and the splenic marginal zone B-cells. 3 Usually occur in an age group of 45-65 years with a mean age of 52 years, can range from 20-80 years, 80% of the patients being men. Patients usually present with fever, weight loss, and frequent infections - commonly atypical mycobacterial infections. Lab investigations show pancytopenia (50%)/ monocytopenia. Patients typically have massive splenomegaly, and 55% may have hepatomegaly. The lymph node involvement is usually rare. 2

Ewald, in 1923 first noticed hairy cells and described them as “Leukamische Reticuloendothelioe.” Later Bouroncle et al.4 in 1958 represented 26 case series with distinct clinical and pathologic features, and in 1966 Schrek & Donelly used the term “Hairy cell Leukemia” to describe the entity.5

Peripheral smear shows pancytopenia and the presence of small to medium-sized hairy lymphoid cells with an oval or indented nucleus, homogenous, spongy, ground glass chromatin, absent/inconspicuous nucleoli, and abundant cytoplasm with circumferential hairy projections.1, 2 Bone marrow shows diffuse or focal involvement of irregular/ poorly demarcated infiltrates with widely spaced cells.2, 1 The cells can have a perinuclear halo in formalin-fixed tissue due to abundant cytoplasm. The prominent cell borders give a ‘fried-egg appearance’ with formalin fixation. Mitotic figures are usually rare or absent. A reticulin stain highlights the marked increase in fibrosis, and an increase in mast cells is also commonly seen.1, 2

The salient histomorphological and immunophenotypic features of HCL and its differentials are summarized in Table 1.

Hairy cell morphology is due to the overexpression and activation of members of the RHO family of small GTPases and up-regulation of growth arrest-specific molecule GAS7. Basic fibroblast growth factor (bFGF) and transforming growth factor-beta 1 is the cause for reticulin fibrosis. The minimal lymph node involvement is due to the downregulation of chemokine receptors such as CCR7 and CXCR5.1, 2

The salient histomorphological and immunophenotypic features of HCL and its differentials.

Chemotherapy with Purine nucleoside analogs (PNA) like Cladribine (2-CdA) or Pentostatin (DCF) is the standard first-line treatment for HCL, conferring in most cases a more prolonged overall survival. The second-line therapy is by Cladribine/ Pentostatin with Rituximab and Bendamustine.4, 5

The uncontrolled infections require Alpha-Interferon (IFN-α), which is also used as an alternative in pregnant women.

Splenectomy may be considered in patients with resistant massive symptomatic splenomegaly with a low-level bone marrow infiltration and pregnant patients with progressive HCL and those refractory to nucleoside analogs and IFN-α. 6, 7

Allogeneic stem cell transplantation is recommended in younger patients with multiple relapses and refractory to purine analogs and Rituximab.8

The response criteria are summarized in Table 2.

The minimal residual disease (MRD) can be done after 4-6 months of therapy.

Massive splenomegaly, leukocytosis with an increased number of hairy cells in the peripheral blood, and an immunoglobulin heavy chain variable region gene mutation are considered the worst prognosis. The VH4-34 positive cases are often associated with a poor prognosis.9

As the patients are at increased risk of developing second cancers like Hodgkin Lymphoma, Non-Hodgkin lymphomas, and thyroid cancer, a close follow-up is highly recommended. The increased risk may be related to the disease and/or the treatment. The role of Pentostatin or Cladribine in the development of secondary malignancies remains debatable.9