Neelam, Singh, and Raina: Role of fine needle aspiration cytology in the diagnosis of juvenile xanthogranuloma in adult: Case report and review of the literature

Role of fine needle aspiration cytology in the diagnosis of juvenile xanthogranuloma in adult: Case report and review of the literature

Juvenile xanthogranuloma(JXG) is an uncommon benign histiocytic cutaneous lesion which is seen primarily in first two decades of life. There is not much literature available on its cytology. We present a case of solitary juvenile xanthogranuloma in a 43 years old female located above left nasal ala which was diagnosed on Fine needle aspiration cytology and subsequently confirmed on histology. Characteristic cytological features favored a diagnosis of juvenile xanthogranuloma.

Juvenile xanthogranuloma is a rare and benign skin lesion which was first reported by Adamson.1, 2 This disorder is the most common form of non-Langerhans cell histiocytosis which is normolipemic and present as yellowish cutaneous nodule.3, 4, 5 The lesions of JXG can occur at any age and are most commonly seen in infants and small children.6, 7

Although the head, neck and trunk are the most common sites for JXG, it can appear anywhere on the body, including the groin, scrotum, penis, clitoris, eyelid, toe nail, palms, soles and lips. 4 Extracutaneous involvement is usually restricted to the eye, specifically the iris, but may also occur in bone (Erdheim-Chester disease), lung and liver.

There is paucity of literature on cytological features of juvenile xanthogranuloma. Cytological features were described by Grenko et al in 1996. 8 We report a case of JXG in a 43 year old female who presented with nodule near left ala and was diagnosed JXG on cytology.

A forty three-year-old female presented in the skin Out Patient Department with chief complaint of a swelling which was located above the left nasal ala and lateral to the nasal bridge. On examination, the swelling was soft to firm of size and was 4mm in diameter. The overlying and surrounding skin was normal and it was not associated with pain/bleeding. Patient was then sent in the department of pathology for fine needle aspiration cytology of the lesion.

The cytology revealed cellular smears comprised of histiocytes with central to eccentric nuclei and having moderate to abundant vacuolated cytoplasm. Interspersed in between, multinucleated (Touton) giant cells (Figure 1, Figure 2) were seen. The cytological features were of a histiocytic lesion and possibility of Juvenile xanthogranuloma was suggested. The patient subsequently underwent an excision biopsy under local anesthesia.

On histological evaluation epidermis was unremarkable. The dermis revealed a dense infiltrate of foamy histiocytes separated by grenz zone. The histiocytes showed central to eccentric nuclei (some of them with indentation) and had abundant vacuolated cytoplasm with indistinct cytoplasmic borders. Multiple Touton type of giant cells was seen (Figure 3, Figure 4). There were also scattered lymphocytes. The histological findings were consistent with the diagnosis of Juvenile xanthogranuloma. Immunohistochemistry for CD68 was positive (Figure 4) which confirmed the diagnosis and ruled out Langerhan cell histiocytosis. 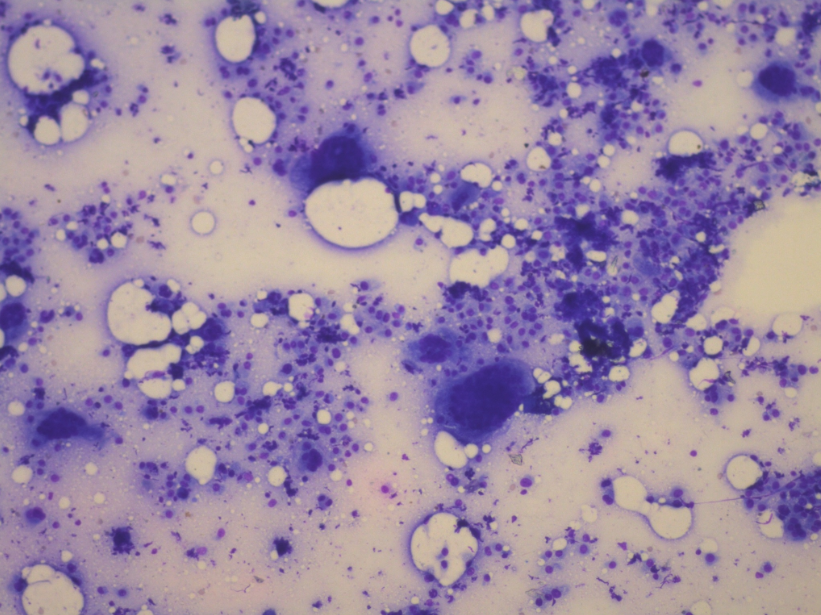 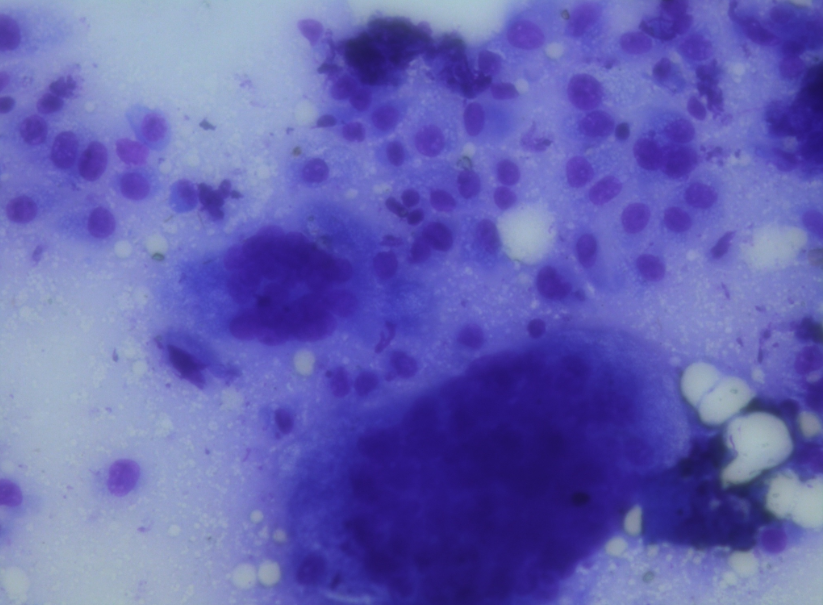 Proloiferation of histiocytes in the dermis with sepration of epidermis by grenz zone. (Hematoxylin and Eosin, 100x) 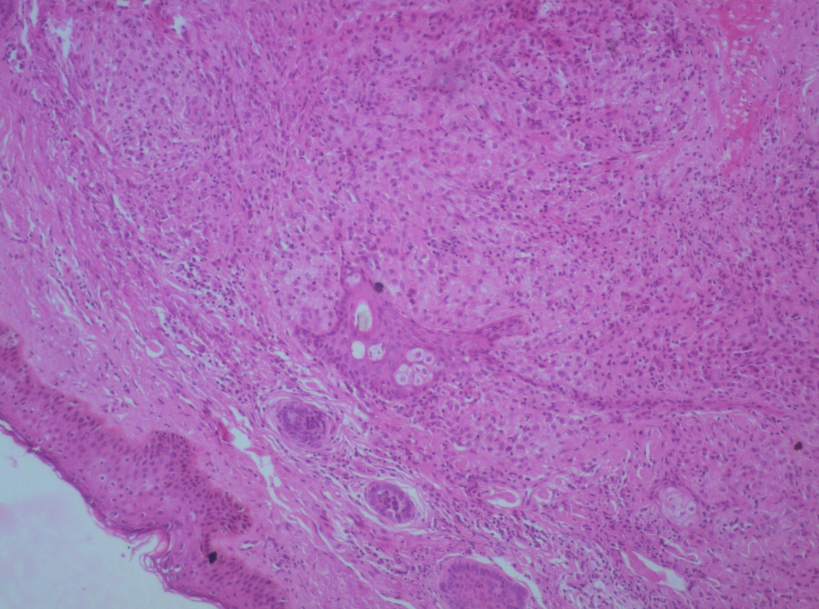 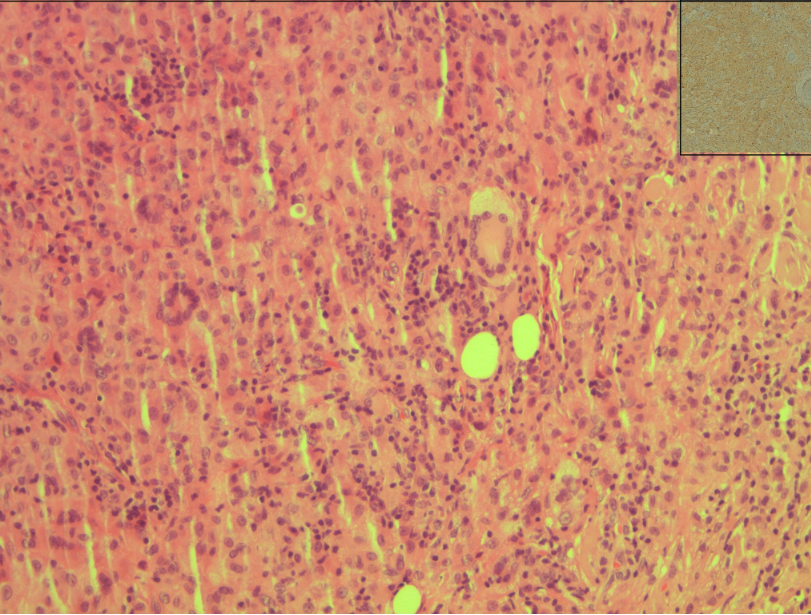 Juvenile xanthogranulomas are most commonly found in early childhood with 5% to 17% of cases occurring soon after birth and 75% within the first nine months of life. Nearly 10% of cases may appear in adulthood and can be called as adult xanthogranuloma.1  In children, the disease most often affects males; however, in adults, there is no sex prevalence.6

Juvenile xanthogranuloma generally occurs in two forms. The first form is composed of multiple 2 to 5 millimeter dome-shaped papules that take on a pink to reddish brown hue and subsequently turn yellow. The second form is composed of one or more large nodules which measure 1 to 2 centimeters. Other variants and presentations include giant juvenile xanthogranuloma, atrophic plaque, cutaneous horn, and subcutaneous mass.9

Juvenile Xanthogranulomas presumed to be develop after unknown stimuli (infectious or physical) provoke a granulomatous histiocytic reaction.6 However, the true etiology of juvenile xanthogranuloma is currently unknown, and conservative management is generally advised.10

As opposed to other xanthomatous diseases, juvenile xanthogranulomas are not associated with metabolic or lipid disorders.6

Adult Juvenile xanthogranuloma rarely regress spontaneously and reports of concomitant extracutaneous lesions are rare.11 The present case was an adult female with a swelling above left nasal ala. Clinical differentials described are Spitz nevi, mastocytoma and dermatofibroma.12

The cytological differentials of histiocytic disorders include Langerhans cell histiocytosis (LCH), haemophagocytic lymphohistiocytosis (HLH), and xanthomas. LCH arises from Langerhan cells and the characteristic cytomorphological features are histiocytes with grooved nuclei and cytoplasmic processes.13, 14 Also there can be presence of mitosis, atypical histiocytes, necrosis and epithelioid cells. 14 On immunocytochemistry Langerhan cells are positive for CD1a, S-100, and Langerin.15, 16 The cytological diagnosis of HLH is based on the presence of numerous macrophages showing phagocytosis of lymphocytes, erythrocytes, and nuclear debris along with several other laboratory criteria required for establishing the diagnosis.17 FNA smears of xanthomas are characterized by loosely cohesive sheets of foamy histiocytes along with extracellular lipid (which can be confirmed by oil red O).18

The histiocytes in Juvenile xanthogranuloma are uniformly positive for vimentin, CD68, and factor XIIIa, and negative for S-100 and CD1a. In our case, the foamy histiocytes were positive for CD68 on immunohistochemistry. The present case was diagnosed on cytology which helped in further management of the case.

Fine Needle Aspiration Cytology is a safer and non invasive diagnostic method used to obtain diagnostic specimen with little stress to the patient. While the clinical impression in this case was of dermoid cyst, the characteristic findings on cytology favoured the diagnosis of juvenile xanthogranuloma. Cytological diagnosis helped in planning the surgical excision as well as work up of the patient for other organ system involvement.