Sinonasal papilloma is a benign surface mucosal neoplasm with variable growth pattern and cytological features. It is a rare benign tumor with tendency to recur and also malignant transformation. The most common sites of inverting papillomata are lateral nasal wall and middle meatus and are usually unilateral. Rarely Bilateral disease can occur, which may be due to direct extension of the tumour, but can also occur as two distinct lesions. The etiology still remains unclear, eventhough the morphology and clinical behavior of this lesion has been well described. Here we report a case of recurrent bilateral nasal polyposis, histologically diagnosed as Inverted sinonasal papilloma, which is a rare entity.

A 60-year-old male patient presented with a chief complaint of nasal blockage more on the right side and nasal discharge for 5 years. It was slowly progressive since onset. The patient also gave past history of similar complaints at 10 and 25 years back, for which he was operated upon in a private clinic and the mass was removed, however, the histopathology reports are not available. On anterior rhinoscopy, a multiple, pinkish, pedunculated, irregular, firm mass was located in the right nasal cavity. X-ray reveals bilateral nasal mass with associated opacification of the adjacent maxillary antrum. A provisional clinical diagnosis of recurrent nasal polyposis was given. The mass was surgically excised by transnasal endoscopic approach and the excised tissue was sent for histopathological examination. On histological examination, the hematoxylin and eosin-stained section showed polypoid tissue covered with non-keratinized stratified squamous epithelium with focal area pseudostratified columnar ciliated epithelium with admixed mucocytes (goblet cells) and intraepithelial neutrophils, which showed inversion into the underlying connective tissue stroma to form nests and islands. The epithelium shows prominent mitosis involving the basal layer of epithelium, however no evidence of atypia/malignancy. Stroma shows edema and congested vessels along with chronic inflammatory infiltrate composed of lymphocytes, plasma cells, and eosinophils (Figure 1, Figure 2, Figure 3). The clinicopathologic correlation was suggestive of a final diagnosis of Inverted Sinonasal papilloma (Schneiderian Papilloma). 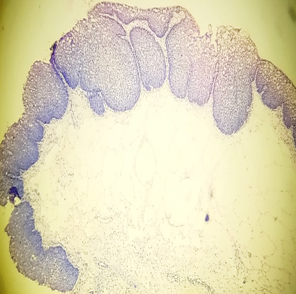 Transition of ciliated columnar and squamous epithelium with down growth into underlying stroma.(H&E,X100 ) 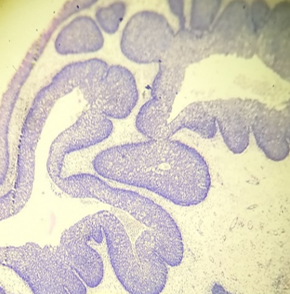 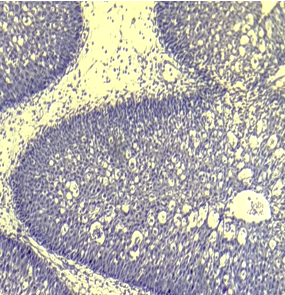 Inverted papilloma (also known as Transitional cell papilloma, Schneiderian cell papilloma, sinonasal-type papilloma) can be defined as a group of benign neoplasm arising from the sinonasal (Schneiderian) mucosa and is composed of squamous or columnar epithelial proliferation with associated mucous cells.4

A series published from the UK had a reported rate of just under 7% for bilateral involvement8 whilst other series report rates typically between 2%,4%, and 5%.5, 9, 10 It is mandatory to resect not only the tumor but also to remove the mucoperiosteum, which is the site of origin, in order to avoid recurrences. Intraoperatively histologic control by frozen section is strongly recommended, however not performed regularly.

Bilateral inverted papillomas are rare and can present with bilateral nasal obstruction. The treatment of choice is based on the extent of the lesion and should be aimed at avoiding recurrence. Thorough histological examination of sinonasal papilloma is recommended to rule out the possibility of malignant transformation. Patients with bilateral disease should have long-term surveillance for recurrence and/or malignancy