Aim: To assess the histopathological findings among colonoscopic biopsies in patients undergoing work up for chronic diarrhea and to deternine the sex and age incidence in major causes

Results: In the present study 100 colonoscopic biopsies were studied with a mean age of 45 years and male to female ratio of 3.3:1. Out of 100 cases, 92 cases were non-neoplastic lesions, 3 cases were benign and 5 cases were malignant lesions. Among 92 cases, majority of them were inflammatory lesions accounting to 85 cases (92.4%), 4 (4.3%) cases were polypoid lesions. The inflammatory bowel disease were more commonly seen in 31-40 years with the male preponderance.

Conclusion: Colonoscopy biopsy is a useful investigation to be carried out in patients with chronic diarrhea for proper diagnosis and treatment. It has a role in diagnosis, follow up and treatment, especially in cases of inflammatory bowel disease and malignancies. It is the gold standard for cancer surveillance.

Diarrheal illness can be associated with significant morbidity and mortality, especially in very young, elderly population and those with co morbid medical illness. Diarrhea can be classified based on the duration into acute, persistent and chronic. Chronic diarrhea is defined in adults by abnormal stool weight (>200 g/day), consistency (loose or liquid), and/or frequency (>3 times/day) lasting for more than 4 weeks.1, 2

The primary causes vary depending on socioeconomic factors, referral status as well as the practice setting. In developing countries chronic bacterial, mycobacterial infection, and parasitic infestation are the most common causes of chronic diarrhoea whereas in developed countries, irritable bowel syndrome, inflammatory bowel disease, malabsorption syndrome, and chronic infections are the most common causes.3, 4, 5, 6, 7 Colonoscopy has been used to evaluate the large bowel, to screen colorectal diseases especially neoplasia and polyps8, 4, 9 Colonoscopy visualizes the mucosa of the colon rectum and upto terminal ileum and checks for macroscopic lesions. Additionally, several procedures can be performed, especially biopsies.10, 11

This study was carried out with an aim to study the Histopathological patterns of colonic mucosal biopsies and correlate with clinical findings. Specimens were obtained from terminal ileum, colon and rectum, in inflammatory and neoplastic disorders. The histopathological findings of each lesion was worked up for chronic diarrhea.

The present prospective study was done in the Department of Pathology, Vydehi Institue of Medical Sciences and Research Centre, Bangalore, during a period of 1 year from January 2014 and January 2015. A total of 100 colonoscopic biopsies from the patients who presented with chronic diarrhea attending Gastro intestinal department were studied. During the procedure, gross pathology was noted and biopsies were taken from representative areas. Relevant clinical details and colonoscopic findings were taken for the study. The Histological diagnosis was given after the studying the haematoxylin and eosin (H&E) stained section. Special stain like Ziehl-Neelsen (ZN) was done to identify acid fast bacilli, to confirm the diagnosis of tuberculoses colitis.

All colonoscopic biopsies from the patients presenting with chronic diarrhea,

The study was approved and permitted by institutional ethical committee.

A total of hundred, colonoscopic biopsy were performed on age groups of patients ranged from 11 - 70years who had presented with features of chronic diarrhea. The majority of cases were males 77%(n=77) and females constituted 23% (n = 23) in the study population depicted in the (Table 1) with the male predominance of age group 31-40 years (31%) and minimum age of 61-70 years depicted in (Figure 1).

Sex distribution of all case 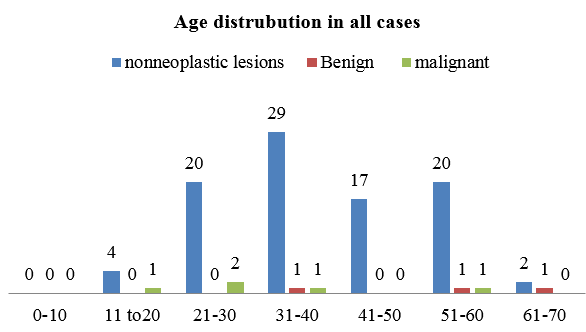 Among the study patients the colonoscopic findings reported were mucosal erythema (18%) mucosal ulceration (50%) polyps (12%) and presence of mass lesion (5%). Normal mucosal study from patient subset was reported in 36(36%) of patients. Findings were mainly seen with male predominance. (Table 2) Among all the colonoscopic biopsies histologically 92 cases were diagnosed as non neoplastic and 8 cases of were diagnosed as neoplastic lesions.

On the basis of microscopic findings evaluated for chronic diarrhea of nonneoplastic lesions show mucosal ulceration 50% of patients could be wide range of diagnosis between inflammatory disease, neoplastic infections. With other features are specific to inflammatory bowel disease like cryptitis 28% and crypt abscess 25% were seen in patients respectively. architectural distortions was noted upto 19% of the patient inflammatory disease. Presence of granuloma which could be seen in tuberculosis colitis and crohns colitis 17% however the features of submucosal inflammatory infiltration and odema which could be differential diagnosis of nonspecific colitis, 11% ulcerative colitis 9% and crohns disease 5%. Non neoplastic lesions were found in all age group of 11 to 70 years with male to female ratio 3.3:1 (Table 2 and Figure 2) 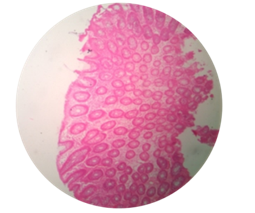 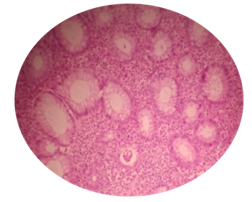 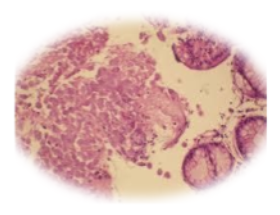 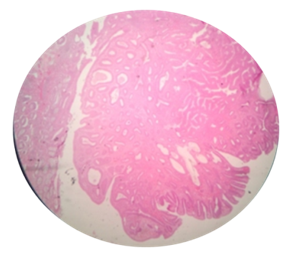 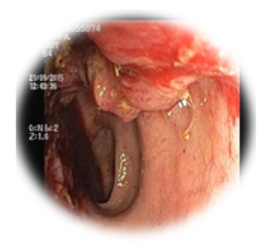 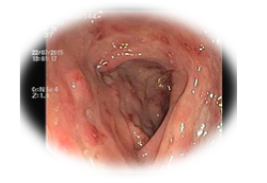 In the present study out of total 92 cases of non-neoplastic lesions, 85 cases were inflammatory lesions, 4 cases were polypoid lesions, 2 cases of lymphoid hyperplasia and 1 case was of amebic colitis. Among 85 cases of inflammatory lesions, 29 cases (34.1%) were chronic non-specific colitis, charcterised by increased lympho-plasmacytic infiltrate in the lamina propria with well-maintained crypt architecture and goblet cells with male predominance (Figure 3), where as specific diagnosis of 12 cases each of acute non-specific colitis (14.1%) cases showed neutrophilic infiltrates in the lamina propria along with cryptitis or crypt abscesses. Tuberculous granulomatous colitis were seen in 12 cases (14.1%) characterised by large areas of caseous necrosis with granulomas, langhans type of giant cells collared by lymphocytes and plasma cells. (Figure 4 a&b)

Ulcerative colitis was seen in 9(10.6%) cases of which 6(66.7%) were given as active phase with features of crypt architectural distortion, neutrophilic cryptitis, abscesses and basal lympho-plasmacytosis and mucosal ulceration (Figure 5) and 3 cases were in the resolving phase (33.3%) One case showed low grade dysplasia. 5 cases of Crohns disease showed histologically by well-maintained crypt architecture and preserved goblet cell population. The lamina propria showed lympho-plasmacytic infiltration along with ill-formed small granulomas. 3 cases of eosinophilic colitis showing eosinophils of 5-6/ HPF along with eosinophilic cryptitis and abscesses.

7 cases of polypoid lesions were diagnosed of which 3 cases were nonneoplastic, 1 case of hamartomatous The lesions were 1 inflammatory polyp, characterized by polyp lined with colonic mucosa and the lamina propria showed increased chronic inflammatory cell infiltration, and 2 cases of hyperplastic polyps, characterized by crenated or serrated appearance of elongated crypts Among all non-neoplastic lesions male predominane is noted One case of amoebic colitis was diagnosed, showed mucosal ulceration and normal crypt architecture. The lamina propria showed chronic inflammatory cells like lymphocytes, plasma cells, histiocytes along with many trophozoites.(Figure 6)

Among 8 cases of neoplastic lesions, of which 3 were benign (37.5%) and 5 were malignant (62.5%). The three benign lesions were tubular adenomas (Figure 7) seen in our study were characterized by increased number of tubular glands in the lamina propria. Out of the five malignant lesions, 3 cases were adenocarcinomas (60%), one was mucinous adenocarcinoma and onecase of sigent ring cell carcinoma characterized by intracellular mucin pushing the nucleus to periphery to form signet ring cells.

The present study fallowed the definition of chronic diarrhea given by ASGE guidelines,1 and also fallowed by Navneeethan U et al,5 Schiller LR et al,14 who considered the duration of symptoms to define chronic diarrhea. Patients presented with symptoms of diarrhea for more than 4 weeks, they were followed by colonoscopy, biopsy with histopathological examination.

The male patients were effected more 77(77%) than the 23(23%) females showing a male to female ratio of 3.3:1, age ranged from 11 to 70 years, youngest and oldest being male. The majority of patients were in the age group of 31-40 years (31%). This observation indicates that colonoscopy is a safe procedure done in all age groups and can be biopsied for further evaluation. The sex and age incidence were in concordance with studies done by Shah et al11 & Galvez V J et al.3

In the present study among the non neoplastic lseions, non Specific colitis (29%) found to be the commonest lesion and studies done by Lee JH et al13 Talbot and Price12 showed same findings.

Ulcerative colitis though rare is emerging disease in India this condition portrays remission and relapses. In the present study, 9 cases of UC were diagnosed with a male to female ratio of 2:1 and occurring at the age group of 20-40 years which are comparable to done by Deroche et al,17 Shah et al11 described 7 cases of ulcerative colitis in their colonoscopic study of 168 cases.

In the present study, there were 21 cases reported as chronic active colitis with male predominance (8:1). All cases showed infiltration with both chronic and acute inflammatory cells. Similar histopathological findings were seen in Preiser F et al18 and De Roche TC et al.17

In the present study 1 case was diagnosed as amoebic colitis, characterized by many trophozoites along with chronic inflammatory cell infiltration in the lamina propria. Eosinophilic colitis, lymphoid hyperplasia and amoebic colitis were included in the present study. 79 Galvez JV et al3 studied 162 patients, which included solitary rectal ulcer, colonic spirochetosis, colonic histoplasmosis, eosinophilic colitis and pseudomembranous colitis as others.

In the present study, there were 5 cases of neoplasia diagnosed in the age group of 30-50 years with male predominance. Most common sub type were adenocarcinomas, 1 case of mucinous adenocarcinoma showing extracellular mucin along with neoplastic cells and 1 case of signet ring cell carcinoma. Similar findings are seen with Galvez JV et al3 4 cases (2.5%) were reported as neoplastic in which the histological diagnoses given were adenocarcinoma, lymphoma and signet ring cell carcinoma.

Endoscopic evaluation of the large bowel has been greatly enhanced by the availability of flexible colonoscopies. A variety of non-neoplastic and neoplastic features were reported in the present study across a wide age distribution and findings correlated with that of similar studies. A greater awareness of the disease and understanding of pathogenesis on the part of the pathologist was felt to be necessary for a better and relevant reported diagnosis.

Hence, colonoscopic biopsies have increased the role of pathologists in the diagnosis and management of patients with chronic diarrhea so that proper clinico-pathological correlation can be made to assess severity and to guide treatment accordingly.

A B Pulimood B S Ramakrishna G Kurian S Peter S Patra V I Mathan Endoscopic mucosal biopsies are useful in distinguishing granulomatous colitis due to Crohn’s disease from tuberculosis”Gut19994545374110.1136/gut.45.4.537