Verma, Singh, Marwah, Pawar, and Rana: Histopathological array of cardiac lesions: An autopsy based study in a tertiary care centre

Histopathological array of cardiac lesions: An autopsy based study in a tertiary care centre

Background: Cardiac lesions are responsible for approximately 60-70% of sudden deaths. Histopathological examination of heart on autopsy plays an essential role in determining the cause of death.

Aims and Objectives: The present study was conducted to analyse histopathological spectrum of various cardiac lesions in autopsy specimens.

Materials and Methods: This retrospective randomized study was conducted in the Department of Pathology, Pt. B. D. Sharma, PGIMS, Rohtak, Haryana. A total of 1152 autopsies were analysed, irrespective of cause of death. Among them heart was included in 1062 autopsies, out of which 62 were autolysed. Hence, 1000 specimen of whole heart were included in our study. A detailed gross and microscopic examination was done and histopathological findings were correlated clinically.

Results: Atherosclerosis was the most common cardiac lesion seen in 610 out of 1000 autopsied heart (61%), followed by ischaemic heart disease in 346 cases (34.6%). 27 cases had pericarditis, 23 cases revealed myocardial hypertrophy, 16 cases showed myocarditis, 11 cases had ventricular haemorrhage, 8 cases revealed changes of electrocution, 7 cases had tuberculosis, 6 cases had calcification of valve and 4 cases had metastasis from carcinoma. One case each of infective endocarditis, rheumatic heart disease and aortitis were also noted. The cause of death was not identified in 304 cases. Left anterior descending artery was most frequently involved vessels (35.02%) followed by left circumflex artery (33.41%) then right coronary artery (31.57%). Out of three major vessels 16.24% had single vessel involvement whereas 32.14% & 51.62% cases had two vessels and three vessels involvement respectively.

Conclusion: Ischemic heart disease with coronary artery atherosclerosis was found to be the leading cause of death with triple vessel disease as the most common pattern of involvement.

Cardiovascular diseases (CVD) are the leading cause of death worldwide with an incidence of 60-70%.1 At the turn of century, it has became the leading cause of morbidity in India because of increase in cardiovascular risk factors. In 2016, the estimated prevalence of CVD in India was estimated to be 54.5 million. A quarter of all mortality is attributable to CVD. Ischemic heart disease and stroke are the predominant causes and are responsible for >80% of CVD deaths.2 These diseases tend to affect patients in the most productive years of their lives and result in catastrophic social and economic consequences.

There is no valid method for sampling living population also there is moderate concordance between clinical and pathological causes of death. Over one fifth of clinically unexpected autopsy findings are correctly diagnosed only by histological examination. Autopsy and particularly autopsy histology are still the most accurate method of determining the cause of death and auditing accuracy of clinical diagnosis, diagnostic tests and death certification. It can also help in studying epidemiological profile, patho-physiology and management modalities of various cardiac lesions.3

Against this background, to assess the magnitude of problem, this study was done to determine the cause and nature of cardiac death and to observe various histo-morphological changes including 1000 autopsy specimens of whole heart.

The present retrospective randomized study was conducted in the Department of Pathology, Pt.B.D.Sharma, PGIMS, Rohtak, Haryana over the period of 9 months.

A total of 1152 autopsies submitted to this institute for post-mortem examination, irrespective of cause of death, were analysed. The cases were medico legal and involved individuals of all age-group, sex, religion and caste. Epidemiological data and post mortem findings were noted from the post mortem and police papers.

Out of total 1152 autopsies, specimen of heart was included in 1062 autopsies, out of which 62 were ill preserved and completely autolysed and were excluded from the study. Hence, 1000 whole heart specimens were included in our study.

The samples were received in 10% formalin fixative with brief history and clinical details. The heart specimens were measured, weighed and examined externally for any rupture, infarct and discoloration. The heart was then dissected by modified Virchow’s method following the direction of blood flow.4 All the chambers were washed off any blood clots and were examined for any pathology of valves including stenosis or calcification and endocardium for vegetations or thrombi. Thickness of ventricular walls and inter-ventricular septum was measured. Areas of myocardial ischaemia were serial sectioned and noted for their location and size. The three main vessels including right coronary artery (RCA), left circumflex artery (LCA) and left anterior descending artery (LAD) were examined using sections at regular intervals of 4-5 mm for any hardening, blockage and plaque. The aorta was checked for any dilatation, thickening and plaque.

Representative sections were taken from right and left ventricular wall, atrio-ventricular junction, inter ventricular septum, apex, three coronary arteries, valves and stump of aorta. Additional sections were taken from suspected pathological lesions. The sections were routinely processed and stained with Haematoxylin and Eosin stain for microscopic examination.5, 6 pecial stains including Van Gieson, Masson Trichrome and Von Kossa were applied according to need and nature of lesion. The microscopic findings were noted and were correlated clinically.

The results of the study were statistically analyzed using the Statistical Package for the Social Sciences (SPSS) version 20 (IBM Corp. SPSS statistics, in Armonk NY) for windows. Data were expressed as mean±standard deviation and range for quantitative variables, numbers, and percentage.

A total of 1152 autopsies received in the department of pathology were analysed. Out of these 90 cases did not include heart tissue and 62 cases were autolysed to yield any findings and were excluded from the study. Hence, a total of 1000 specimen of whole heart were included in our study.

The cases presented with variable cause of death. Majority of them (36.3%) had cardiovascular symptoms like chest pain, breathlessness and dizziness. Second most common cause was unknown previous illness (11%) and cases were under treatment. 10% cases were brought dead following collapse or an uncommon preceding event. (Table 2)

A wide spectrum of histopathological changes were observed on microscopic examination. Coronary atherosclerosis (CA) was the most common finding seen in 610 cases, followed by ischaemic heart disease (IHD) in 346 cases. 27 cases showed pericarditis, myocardial hypertrophy was found in 23 cases, 16 cases revealed myocarditis, 11 cases had ventricular haemorrhage due to trauma, 8 cases had changes of electrocution, 7 cases showed tuberculosis with variable involvement of pericardium and myocardium, 6 cases had calcification of valve and 4 cases revealed metastasis from carcinoma. In 304 cases (30.4%), no significant pathological changes were noted in heart. (Figure 2, Figure 3 and Table 3)

One case each of rheumatic heart disease (at 14 year of age) and infective endocarditis (at 35 year of age) were also noted. In age group 0-10 years microscopic examination of heart and vessels was unremarkable. No congenital anomaly was seen in newborn and infants heart.

Complete occlusion of vessel was seen in 16, 12, 4 cases of LAD, LCA and RCA respectively. In 152 cases (24.4%) aorta also showed atherosclerotic plaques. One case of aortitis was also noted. The clacification was confirmed by Von kossa stain and disrupted elastic fibres were demonstrated by Von geison stain. Most of the cases (51.62 %) revealed triple vessel disease followed by double vessel disease (32.14%) and single vessel disease (16.24%).

Pattern and distribution of IHD

Overall prevalence of IHD was 34.6% with features of chronic IHD (CIHD) in 21.6%, acute myocardial infarction (AMI) in 8.5% and acute on chronic IHD in 4.5%. A significant association was found between increasing age and incidence of IHD, with maximum number of cases reported in the age group of 51-60 years.

Histopathological changes in heart according to age group distribution

Age and sex distribution of cases 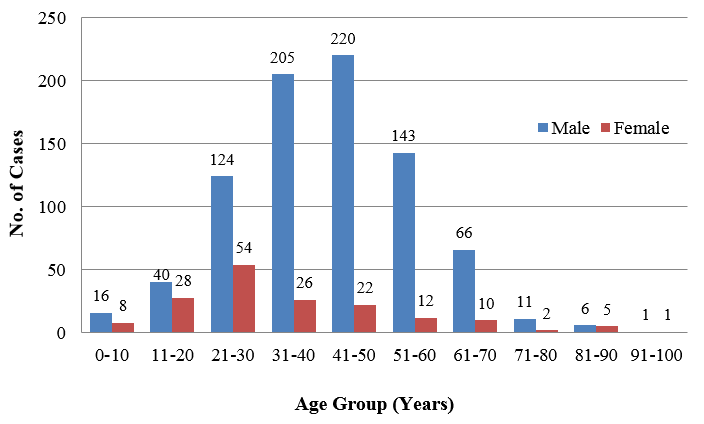 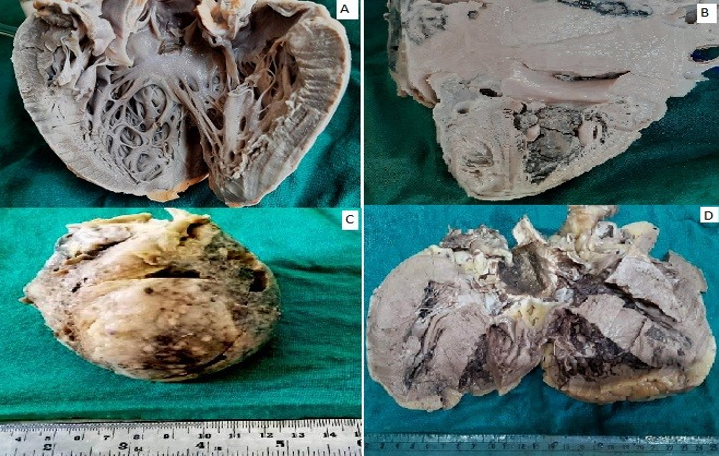 Histopathological examination of heart plays an important role in determining whether death is attributable to a cardiac disease or to other cause, to determine the nature of cardiac disease, whether the mechanism was mechanical or arrhythmic and to rule out the possibility of trauma or any other unnatural cause.7

Out of 1000 whole heart specimens from our study, 83.2% were males and 16.8% were females, indicating that death from all causes including cardiac and non-cardiac was more common in men, and most of the cardiovascular deaths occurred within the age range of 41-60 years. This may be due to westernization of Indian society, sedentary life style, poor diet habits and lack of regular medical checkups. Secondly, there is increased indulgence to smoking and alcohol in males, while in females, estrogen has vasoprotective effects. These findings are supported by many studies showing similar male predominance and role of increasing age in sudden cardiac death patients with Karnafil R et al having maximum case in 41-50 years age range, Rao D et al in 50-60 years and Chug SS et al in 50-59 years.8, 9, 10

We also observed that in adolescents and young adults (<40 years) hypertrophic cardiomyopathy, myocarditis, pericarditis, tuberculosis, electrocution, ventricular haemorrhage due to trauma and premature coronary artery disease were found to be a major causative factor. While after 40 years, coronary atherosclerosis and IHD were predominant findings along with metastasis and calcification of valve in a few cases. These findings are in concordance with study done by Rao D et al, Singh P et al and Marwah et al.9, 11, 12

In our study, nearly all cases with ischaemic heart disease had variable degree of atherosclerosis as reported by Marwah N et al.11 In terms of frequency distribution of various areas, diffuse involvement of all the areas was most common pattern (37.57%), followed by involvement of left ventricular wall (22.83%) and apex (15.90%). Isolated involvement of RVW was seen in one case of acute MI. These findings are in accordance to those well documented in literature.13, 19

To conclude, in this study, ischemic heart disease with coronary artery atherosclerosis was found to be the leading cause of death with triple vessel disease as the most common pattern of involvement. Autopsy is the first and last opportunity to make an accurate diagnosis. The autopsy report should relate the pathological findings to the clinical history including circumstances of death and any other investigation performed close to the time of death.

India State-Level Disease Burden Initiative CVD Collaborators. The changing patterns of cardiovascular diseases and their risk factors in the states of India: the Global Burden of Disease Study 1990–20162018612133951