Aims: 1) To detect Cyclophilin, APC and SFRP5 genes associated with Epithelial ovarian cancer by PCR. 2) To study and compare the prognostic and diagnostic efficacy of serological markers like Ca 125 and HE4 and their correlation with epithelial/ non epithelial ovarian neoplasms.

Methods and Materials: 64 cases fulfilling the inclusion criteria and giving their consent for inclusion in the study were enrolled as subjects of the present study over a period of one year. After DNA extraction (Invitrogen mini kit, USA) conventional PCR to amplify the extracted DNA and further subjected them to agarose gel electrophoresis for the identification(expression) of 3 genes i.e Cyclophillin, APC and SFRP5, was done; However, none expressed.

ELISA was used to assess CA125 and HE4 pre and post surgical intervention.

We could not establish correlation of the genes’ expression with the serum markers and histopathology.

Conclusions: Combining HE4 and CA125 both might be more helpful than either of them using alone, in diagnosing as well as prognosticating ovarian diseases.

A panel of multiple genes on a larger sample size may be needed for CTC detection.

Ovarian malignancies constitute 3% of all malignancies in the females and is the fifth most common cause of death due to cancer in women.1 In most of the population-based cancer registries in India, ovarian cancer is the third leading site of cancer among women, trailing behind cervix and breast cancer. The age-adjusted incidence rates of ovarian cancer vary between 5.4 and 8.0 per 100,000 population in different parts of India.2

Primary ovarian tumors may arise from surface epithelial cells, germ cells, or sex cord stromal cells, so have been classified accordingly. Secondary tumours are implanted on to the ovary from somewhere else.

Dualistic model of epithelial ovarian cancer (EOC), which divides epithelial ovarian carcinomas into two broad categories, designated type I and type II. Prototypic type I tumour is low grade serous serous carcinoma, which has a high frequency of KRAS and BRAF mutations but no TP53 mutations and prototypic type II tumor is high grade serous carcinoma which is characterized by high level of genetic instability and harbours TP53 mutations in nearly all cases.

The main problem with the epithelial ovarian cancers is that these patients (almost 75%) are diagnosed on advanced stages (FIGO III/IV). By the time these are diagnosed, metastases have already occurred by transperitoneal, hematogenous and lymphatic routes.3, 4

A. Polymerase Chain Reaction: Molecular diversity exists within specific histological subtypes of EOC, between different tumors of an individual patient, as well as within individual tumors. EOC are classified as either type I or type II tumor on molecular basis with implications on disease pathogenesis and prognosis. Association of various genes alteration with the EOC I have been studied like BRAF, KRAS PIK3CA, CTNNB1, & CDKN2A and type II ovarian malignancies with BRCA1, BRCA2, MYC, MECOM, CCNE1, PRCK1, NOTCH3, KRAS, ERBB2, KIT & EGFR.5, 6, 7, 8

For the early diagnosis of EOC, multiplex nested methylated specific polymerase chain reaction (PCR) is another method to detect the methylation level of serum and tissue samples in patients with ovarian carcinoma and the results compared with the detection with CA125.9

B. Circulating Tumor Cells (CTC) and Cell free DNA (cfDNA): Tumor-derived DNA has been identified in the body fluids of patients with a variety of cancers, including colorectal, head and neck, lung, bladder, kidney, and prostate.10, 11, 12, 13, 14 Identifying tumor-specific molecular alterations in urine, saliva, sputum, and stool can be a noninvasive diagnostic test for cancer. 15, 16, 17, 18

The use of cfDNA as a screening method has been evaluated in cancers of renal cell, lung, testicular, colorectal, and breast origin, suggesting that it could be used as a non-invasive biomarker for a wide variety of cancer types. 18, 19, 20, 21

These cfDNAs were found to range between 0.5 to 21 kb in length, with a plasma concentration ranging from 0.15 to 12 mg/mL, used as a diagnostic tool to detect different forms of cancer including hematological, colorectal and thoracic neoplasms.22 This was followed by studies that focused on identifying micrometastases in form of CTCs.23, 24, 25 Bettegowda et al. showed that these micrometastases signal can also be identified by measuring ctDNAs. 25

A. CA125 (Carbohydrate or Carcinoma Antigen) is a high molecular weight glycoprotein. Serum CA125 levels are routinely ordered in women with adnexal masses, and levels less than 35 U/ml are considered to be normal. However, CA125 has low specificity as it is also increased in benign endometriosis, endometrial and cervical adenocarcinoma, breast and colon cancer etc. 26, 27

B. Serum HE4 (Human Epididymis protein) is used to monitor recurrence/progressive disease in patients with epithelial ovarian malignancy. Normally female genital tract and epididymal epithelium secrete HE4. Its over expression is seen in serous and endometrioid ovarian malignancies. 26

The study was carried out in the department of Pathology, in collaboration with Microbiology and Obstetrics and Gynaecology, was approved by the Institutional Ethical Committee and review board. Patients of clinically diagnosed and radiologically suggested ovarian mass were included in study. Final histopathological diagnosis was recorded in all cases.

Patients with a history of cancer, either gynecological or from other systems or inflammatory diseases as a side diagnosis were excluded.

The blood samples were collected twice, once before any invasive procedures or before start of any medical treatments, and second between 4th-7th day post surgery. Clinical information including demographic information, serum CA 125 and HE4 levels, tumor stage, histology, and ultrasonographic finding was obtained from the patients’ medical records and pathology reports. Serum markers were tested and analysed in pre-operative and post-operative samples, in all cases.

The tumor volume in epithelial ovarian cancers was obtained before any tumor reduction by Radiology. CA 125 was measured before any treatment or surgery. The cut off value of 35 U/mL was used to distinguish between normal and pathologic cases.

A total of 5 mL of venous blood sample were collected. These samples were transferred to an 8 mL gel serum separator tube (BD—Becton, Dickinson and Company) and kept at room temperature for coagulation. Subsequently, the samples were centrifuged for 10 min at 1000 g. The samples were processed within 2 hours after collection to prevent loss of cell-free DNA for PCR. 23, 24

The serum of all patients were collected and DNA was extracted by Invitrogen DNA Mini Kits (USA, Invitrogen company), with all operations being conducted strictly according to the kit instructions. PCR was performed for 3 genes that is Cyclophilin, SFRP5 and APC.

A sample would be labelled as CTC positive if at least one of 3 gene marker panel is found to be over expressed.

Serum CA125 concentration was detected by ELISA CA125 Test principle: The CA125 quantitative test is based on a solid phase enzyme linked immunosorbent assay, measured spectrophotometrically at 450nm. The concentration of CA125 is directly proportional to intensity of the sample.

Serum HE4 was detected by sandwich ELISA

The optical density (OD) measured with spectrophotometry at a wavelength of 450 nm ± 2 nm is proportional to the concentration of Human HE4 calculated in samples by comparing the OD of the samples with the standard curve.

64 cases fulfilling the inclusion criteria and giving their consent for inclusion in the study were enrolled as subjects of the present study. However, 5 samples were discarded due to either inadequacy or hemolysis. All the calculations are based on 59 samples studied for all parameters.

On the Serum samples which we procured, after DNA extraction (Invitrogen mini kit, USA) we performed conventional PCR to amplify the extracted DNA and further subjected them to electrophoresis for the identification(expression) of 3 genes i.e Cyclophillin, APC and SFRP5, however, none of the genes expressed in either benign or malignant cases, in either pre or post operative samples.

A. Evaluation of mean preoperative HE-4 and CA-125 levels for their diagnostic efficacy

Decline in pre-operative CA-125 and HE-4 was observed in patients with benign as well as malignant lesions.Table 2C. 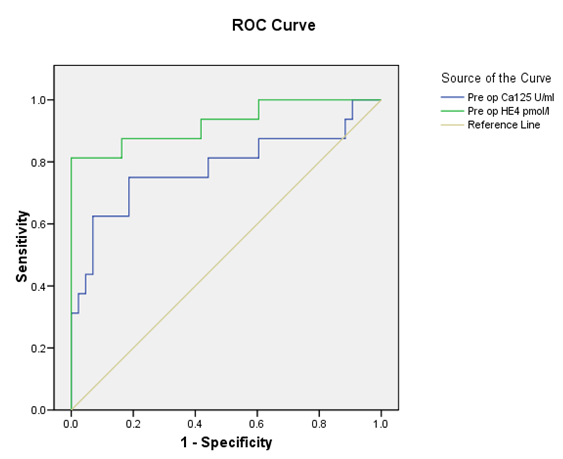 On receiver-operator characteristic analysis, the area under curve was found to be 0.782 for CA-125 and 0.926 for HE-4. The difference between two was not significant statistically (p>0.05).Table 2D.

Since none of our samples came out to be positive for either of the three genes (cyclophyllin, SFRP5 and APC), we probed further into literature to compare our results. Most of the related studies conclude that concentration of CTCs presented in ovarian cancer are extremely low, 1/109 blood cells or 1/106 nucleated blood cells, and hence difficult to detect. Moreover stringent procurement, storage and test conditions are demanded.3

However Shao et al. in 2015 suggested that there is a definite correlation between levels of serum cfDNA and development of ovarian cancer, but their detection is challenging.29

Ignatiadis et al. in 2015 said that ctDNA may represent an exceedingly rare subpopulation within total cell-free DNA, at levels corresponding to one genome equivalent in 5 mL of plasma (0.01% allele fraction), and may be undetectable in plasma volumes typically sampled.30

CA-125 levels ranged from 6.10 to 7087 units. A mean of 62.49 units/ml and SD of 109.91 in benign cases, and a mean of 902.39 units/ml and SD of 1792.10 in malignant cases was calculated, as is shown in Table 2A. The ability of CA125 in differentiating benign from malignant cases was found to be statistically significant (p=0.003). Along with USG findings, it proves to be a sensitive method to differentiate benign from malignant masses. Some studies however show that CA125 can sometimes over-diagnose benign cases like endometriosis and hence lead to unnecessary operation.

Detection of circulating tumor DNA in ovarian cancer sera is difficult, and requires meticulous draft of multiple genes in panel to get a significant yield Serum markers must be used in conjunction with clinico-radiological findings.

I would like to express the deepest gratitude to my chief supervisor and guide Dr. Riddhi Jaiswal (M.D.) Associate Professor, Department of Pathology, KGMU, Lucknow for her constant encouragement, support and constructive criticism throughout the course of this study. I have been fortunate as I got opportunity to work under her supervision. Throughout the thesis, she handled my careless mistakes with great patience and bestowed her motherly love on me. I thank you mam for everything. Dr. Riddhi Jaiswal has been my mentor, my guide, my icon. In true sense words fail to express my heartfelt thanks.

I am highly grateful to Family and friends who supported me throughout and in most difficult times.

I am very much thankful to the patients for their cooperation and wish them good health.