Rhabdomyosarcoma is a malignant neoplasm of mesenchymal cells, which shows varying degrees of striated muscle cell differentiation. It predominantly occurs in children while rarely found in adults. Involvement of the oral cavity accounts for only 10-12% of all head and neck cases. Herewith, we report a rare case of oral spindle cell / sclerosing rhabdomyosarcoma in a 47-year-old male presented with a small mass involving the gingiva of right upper incisor. The mass was excised with a preoperative diagnosis of gingival epulis and subjected to histopathological and immunohistochemical examination which confirmed it to be spindle cell / sclerosing rhabdomyosarcoma. Data regarding its clinical course, genetic abnormalities and prognosis as a combined subtype is scant.

Rhabdomyosarcoma (RMS) is the most common childhood soft tissue sarcoma in children under 15 years of age and accounts for an estimated 4.5% of all childhood cancers. It is rare in person older than 45 year and accounts for an estimated 2- 5 % of all adult sarcomas.1 According to WHO (2013), It is subtyped into an embryonal RMS, an alveolar RMS; a pleomorphic RMS and more recently, spindle cell and sclerosing RMS (S-ScRMS). 2 The spindle cell variant was originally proposed in 1992 by Cavazzana, and was initially considered as a variant of an embryonal RMS2, 3 while sclerosing variant was first described in 2000 by Mentzel & Katenkamp and was identified as another distinctive variant of a RMS.2, 4 Several studies had described a relationship between spindle cell and sclerosing RMS that lately have emerged together as a distinct subtype of a RMS.5, 6, 7, 8Spindle cell/ sclerosing rhabdomyosarcoma is an uncommon subtype, accounting for 5-10% of all cases of RMS. It affects both children and adults, with a male to female ratio of up to 6:1.2 Due to the rarity of the cases in the literature and recent reclassification of S-ScRMS, every case report is valuable to the literature. Hence, the present case report holds a value.

A 47-year-old male presented with a complaint of swelling over gingiva of right upper incisor since one month. The patient had history of oral injury 6 month back. Clinical examination revealed 1x1cm, soft, abscess like, non-tender, non-fluctuating mass on maxillary gingiva. X-ray demonstrated no bony changes. As the clinical findings suggested a tumorous lesion, a provisional diagnosis of gingival epulis was made. An incisional biopsy under local anesthesia was performed and sent for histopathological examination.

On microscopy, it revealed well defined tumor in supepithelium which was raising and stretching the epithelium. Tumor was composed of interlacing bundles of uniform oval to short spindle cells separated by thin septae. The cells showed mild to moderate pleomorphic, fusiform nuclei, dispersed chromatin, definite visible nucleoli and ill-defined eosinophilic cytoplasm. Many mitotic figures were seen. No necrosis. Opinion was given as spindle cell tumor (Figure 1a).

Immunohistochemistry revealed cells were positive for vimentin and strongly positive for desmin (Figure 1b). Hence suggested mesenchymal origin of tumor. Further confirmation was made by application of markers like MyoD1, CK, Ki-67. Results were positive in nuclei for MyoD1 in majority of tumor cells (Figure 1c), weak positive in aberrant pattern for CytoKeratin (Figure 1d) and 30% for Ki-67. The tumor cells were negative for SMA, Myogenin, EMA, S-100, CD34, P-63, HMB-45 & Melan-A.

After Surgery, the patient is well & there is no evidence of recurrence till now.

Comparative studies of cases of rhabdomyosarcoma in literature 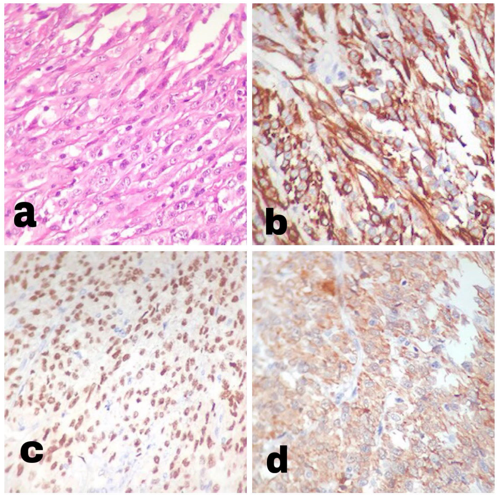 Rhabdomyosarcoma (RMS) is malignant neoplasm of mesenchymal cells. It is most common soft tissue sarcoma in children. On the contrary, it is very rare to see RMS in adults.15 Spindle cell/sclerosing rhabdomyosarcoma is a rare skeletal-muscle tumor with distinctive clinicopathologic characteristics and is designated in the WHO classification (2013) as a separate fourth broad category under RMS. 2 Spindle cell RMS (SRMS) was first reported by Cavazzana et al 3, Lesion with spindle cell morphology are commonly identified in the paratesticular region of pediatric patients,2, 16 while in adults >50% of cases affect the deep soft tissues in the head and neck. Lesion with sclerosing morphology in both age groups are most common in the limbs. 2

Histologically these tumours are characterized by predominant population of spindle neoplastic cells. Nuclear atypia, hyperchromasia and mitotic figures are common.Occasionally RMS with spindle cell morphology may show stromal hyalinization with tumor cells imparting a pseudovascular appearance, and characterizing the sclerosing variant of RMS. 2, 3

We described a case of oral spindle/sclerosing rhabdomyosarcoma in a 47-year-old male. Comparative studies of similar cases9, 11, 10, 12, 13, 14 in literature has been summarized ,please refer to Table 1.

According to WHO (2013) spindle cell RMS shows diffuse expression of desmin and positivity for SMA and myogenin. Sclerosing RMS shows limited expression of desmin and myogenin, but strongly positive for MyoD1.2 The diffuse and strong positivity for MyoD1 supports our diagnosis, as Myo-D1 has been shown to be a more sensitive marker for sclerosing variant of RMS. 10, 13

Patients with S-ScRMS demonstrate heterogenic genetic alterations that may have particular importance on prognosis.10 Recent studies focusing on SRMS-ScRMS shows a variable prognosis based on their age at diagnosis & genetic abnormalities. SRMS in infants exhibit recurrent NCOA2 and VGLL2 related fusions and are associated with a favorable outcome & long-term survival10, 17 In contrast, SRMS-ScRMS with MYOD1 mutations follow an aggressive clinical behavior and poor prognosis, irrespective of the patient's age.10, 17, 18

Most RMS are treated with conventional surgery, chemotherapy and radiotherapy.10 Despite efforts at various treatment techniques, prognosis of S-ScRMS in adults is significantly worse, with a rate of recurrence and metastasis of approximately 40-50%.2

Oral rhabdomyosarcoma can develop insidiously and due to variable clinical presentations and histopathological appearances, early lesions may be mistaken for inflammatory, benign neoplastic or infectious processes. Furthermore, due to the rarity of the cases in adults & recent reclassification of S-ScRMS, misdiagnosis is common. Hence, immunohistochemistry plays an important role in identiﬁcation of this lesion.

J C Robinson M S Richardson B W Neville T A Day A C Chi Sclerosing rhabdomyosarcoma: report of a case arising in the head and neck of an adult and review of the literatureHead Neck Pathol20137193195