Fibrous dysplasia (FD) is a crippling skeletal disease which can be polyostotic or monostotic. It is caused by activating mutations of the GNAS gene, which encodes the stimulatory G protein Gαs.1, 2 FD shows irregular immature woven bone formation without osteoblastic rimming and fibrous tissue. Rarely little amounts of cartilage can be seen in FD while in FCD there is cartilage with a relatively high cell density in most of the cases.3 Massive cartilaginous differentiation in FD is called fibrocartilaginous dysplasia (FCD) and is considered a rare variant of FD.3, 4 Lower extremities, especially proximal femur is most commonly affected by FCD leading to disabling deformity of the limb.5, 6 As per literature search, we could find less than 30 cases of FCD in femur in English literature.4 Radiologically the lesion may show variable density ranging from radiolucent to dense, depending on the relative proportions of the fibrous and osseous tissue and cartilaginous tissue.4 On histopathology characteristic shaped (C-shaped) woven bone and bone formation without osteoblastic rimming along with background of fibrous proliferation is seen in FD.3 The fibro-osseous lesions have hyaline cartilage islands in juxtaposition to a fibro-osseous areas and columnar arrangement of cartilage cells resembling a growth plate can be seen.7 The cartilage may show mild to moderate atypia.7 Due presence of above features it is very important to diagnose FCD and differentiate it from multiple enchondromatosis, Ollier disease, chondrosarcoma, and chondrosarcoma secondary to FD.3 The diagnosis should include a multidisciplinary team approach involving clinical, radiological and pathological correlation.

A 4-year-old male child presented with swelling around knee joint, difficulty in walking and clinically had varus deformity of knee joint. X-ray showed a well-defined radiolucent lesion on posteromedial aspect of distal end of femur. The lesion was monostotic and was not associated with syndromes or other skeletal defects. Curettage of the lesion was done and fragmented grey white firm to hard tissue bits measuring 4 x 3 x 2 cm were received for histopathological examination. The tissue was processed entirely and slides were stained with H & E. Multiple sections studied from the specimen showed branching and anastomosing irregular trabeculae of woven bone along with cartilage (Figure 1). The bone did not have prominent osteoblastic rimming. The stroma comprised of fibroconnective tissue, spindle cell proliferation with few inflammatory cells and giant cells. Intervening cartilage showed hyperplasia (Figure 2, Figure 3). There was no evidence of clear cells or malignant chondrocytes. There was no evidence of malignancy in the sections studied. Our final diagnosis was Fibrocartilaginous dysplasia of distal end of femur. 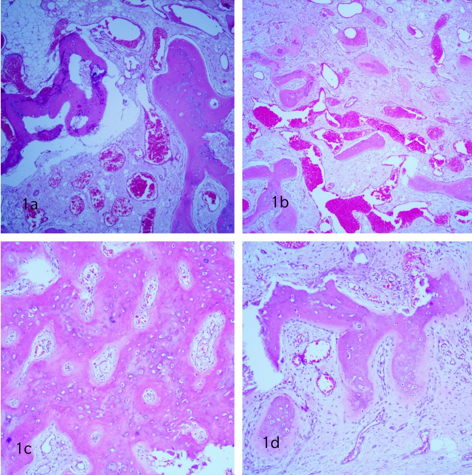 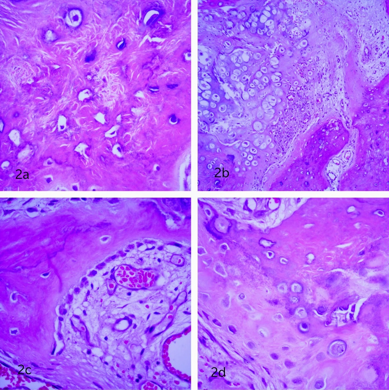 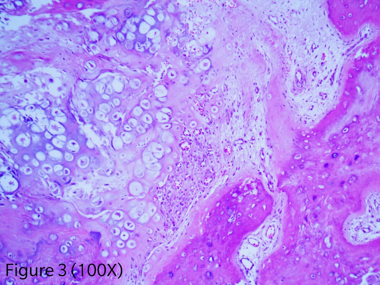 FCD is a rare skeletal disorder, a variant of FD. Pelzmann et al. reported it first time in 1980 as an FD lesion containing extensive cartilage. 3 A missense mutation in the guanine nucleotide binding protein/α subunit 1 gene on chromosome 20 causes FCD. 8, 9 It is a genetic noninherited condition. The polyostotic variant usually is associated with McCune–Albright syndrome. 8, 9 Our case was monostotic and did not have syndromic association.

According to a review done by Morioka et al this lesion is more common in young males, proximal femur is the most common site and monostotic disease is more common than polyostotic lesions.3 In a study by Choi et al10 the lesions in tibia demonstrated progressive, spontaneous resolution; whereas had slim possibility of spontaneous regression was noted in femoral and humeral lesions. Corrective osteotomy should be when the joint mechanics and alignment is disturbed or the deformity is increasing or persistent.10

On histopathology both cartilage hyperplasia and fibro-osseous lesion are present. In a study by Vargas-Gonzalez the lesion had cartilaginous (60%) and a fibro-osseous (40%) component.11 In their study there was fibrous dysplasia along with increased cartilaginous areas. The cartilage part showed increased cellularity and some chondrocytes displayed moderate areas of endochondral ossification and calcification. Atypia and binucleation was also noted.11 In our study there was no significant atypia in the cartilage.

Histogenesis of this cartilage may be intrinsic to the lesion itself, or may result from disruption of an affected growth plate during childhood or secondary to fracture.8 According to a study by Kishan Prasad HL et al this lesion originated from prolonged columns of the epiphyseal growth plate or these cartilaginous islands arose as developmental rests from epiphyseal cartilage and this cartilage tissue developed simultaneously.8 It is very important distinguish these lesion from chondrosarcoma arising in FD. Treatment by an extensive curettage, bone grafting, and correction of the deformity with an osteotomy and internal fixation should be done in these cases with follow up of the patient.

FCD is a rare bone lesion that needs to be surgically treated early to prevent progressive deformity and risk of pathological fractures. Radiologically the diagnosis can be misleading and thus understanding the histopathological spectrum of the disease is necessary. This lesion requires careful histopathological assessment to rule out malignancies with chondroid appearance. Genetic testing and syndromic association of the disease if present should also be noted.

E R Henderson H Monforte J B Neustadt Fibrocartilaginous dysplasia of the proximal part of the femur with a pathological fracture in a child - A case reportJBJS Case Connect2014449010.2106/JBJS.CC.M.00254