Guest in Meckel’s diverticulum: An incidentiloma

‘Incidentiloma’ word means an abnormal lesion or tumor detected by chance during the medical imaging test during routine examination or during physical examination or during surgery. Meckel’s divertivulum (MD) is common congenital anomaly of the gastrointestinal tract, constituting 2% of population.1 It’s located on the antimesentric border of ileum and in 90% cases within 90 cms from the ileo-cecal valve.2 Most of the cases are asymptomatic and in only 4 -6% of its cases showed symptoms.3 Symptomatic patient are from the age group less than two years. The most common symptom is hemorrhage constituting 25 to 50% of complicated patients.1 Intestinal obstruction follows bleeding as second complication in 25% symptomatic patients.3, 4 The main etiology of the obstruction is from intussception or volvulus around mesodiverticular band. A long Meckel’s with narrow base predisposes to intraluminal obstruction causing inflammation, necrosis and perforation.1, 4 The 3rd common symptom is due to diverticulitis in 20% of symptomatic patients. Rarely it undergoes torsion from twisting of the diverticulum around its narrow base resulting vascular insufficiency and lead to gangrenous changes.1, 3

In the developing countries like India, intestinal obstruction by ascaris infestation is commonly seen. In most of the cases, it remains asymptomatic. In few cases it results in complication like obstruction, perforation or gangrene.5

(Gangrenous Meckel’s diverticulum with round worms inside the lumina) 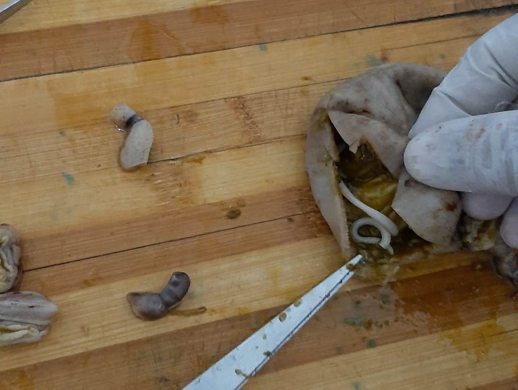 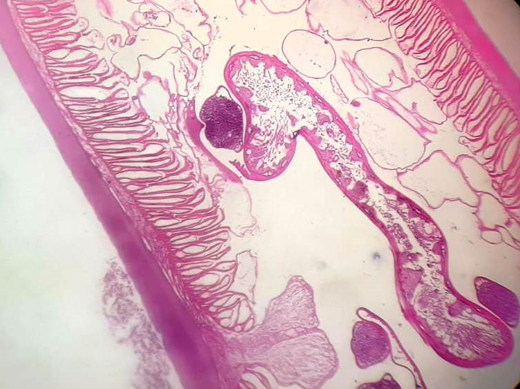 To our surprise, on grossing the resected diverticulectomy specimen-the lumina showed multiple round worms of varying length ranging from 9 to12 cms, obstructing the lumina (Figure 1) and leading to vascular insufficiency and gangrene of the wall. The whole of the lining of the Meckel’s showed grey brown gangrenous changes. As the interest in histopathology the grossing of the worm was done and sections were taken. Histopathologically cross section confirmed the Ascaris lumbricoides constituting the parts like cuticle, lateral cords and myocytes and some gut parts in the lumina of the Meckel’s (Figure 2). The Meckel’s showed full thickness hemorrhagic necrosis and chronic inflammatory exudates.

Ascaris lumbricoides causes variety of surgical complications in children due to its wandering nature from its habitat of small intestine ranges from obstruction, organ inflammations, abscess and diverticulitis, appendicitis.1, 5 Incidence and severity of complications were depends on worms size and the load of worms. Most of the cases were rarely diagnosed preoperatively as Meckel’s diverticulum with worm infestation. This is the reason for its incidental finding. 5

The aim of this editorial to highlight the complications of ascariasis as intestinal obstruction in Meckel’s diverticulum. The operating surgeon should be vigilant while handling such cases of gangrenous bowel, keeping the possibility of worm infestation. Early intervention will be helpful in decreasing mortality/morbidity and may salvage the bowel in pediatric patients.