Background: Ovarian pathology ranges from innocuous non-neoplastic lesions to malignant neoplastic entities. The incidence, clinical appearance and the behaviour of the different types of ovarian tumour is extremely variable. In order to have a better understanding of frequency and histomorphological patterns of different ovarian lesions study was encountered in our tertiary care hospital.

Aims & Objectives: To study the histopathology of ovarian non-neoplastic and neoplastic lesions and to study the distribution of ovarian lesions with respect to various parameters like age, bilaterality, gross and microscopic features.

Methods and Materials: This is a prospective study of 125 ovarian specimens received in department of pathology, G.K. General Hospital, Bhuj during August 1, 2018 to July 31, 2020.

Results: Total 125 cases of ovarian specimens were studied, amongst them 58 were non-neoplastic and remaining 67 were neoplastic. The most common non-neoplastic lesion seen was follicular cysts 12 cases (21%), followed by endometriosis 9 cases (16%). Among 67 neoplastic ovarian lesions 58(87%) cases were benign, 3(4%) cases were borderline and 6 (9%) cases were malignant. In benign ovarian neoplasm, most commonly seen lesions were serous cystadenoma 24 cases (36%) followed by 13 cases (20%) of mature cystic teratoma. In malignant cases, maximum was of high-grade serous cystadenocarcinoma.

Conclusions: Ovarian epithelial tumours are the most common type, while serous cystadenocarcinoma was the most common malignancy. Histological examination is gold standard and in certain difficult cases require immunohistochemistry.

Key Messages: Ovary is an important reproductive organ with involvement in production of progeny. Ovarian pathology ranges from innocuous non-neoplastic lesions to malignant neoplastic entities. Ovarian neoplasms have become increasingly important not only because of the wide range of neoplasms, but also because they have gradually increased the mortality rate. The incidence, clinical appearance and the behaviour of the different types of ovarian tumour is extremely variable.

Ovary is an important reproductive organ with involvement in production of progeny. Ovarian lesions include wide spectrum of complex neoplasms with a variety of histopathological patterns arising from epithelial tissues, connective tissues, specialized hormone secreting germinal and embryonal cells.1 Ovarian cancer accounts for about 3% of all cancers in women. Ovarian tumours represent about 27% of all female genital cancers and accounts for 52% of deaths caused by female genital cancers.2 Indian Cancer Registry data project ovary as an important site of cancer in women, comprising up to 8.7% of cancers in different parts of the country.3 Ovary is subjected to monthly endocrine and traumatic insults during normal ovulatory cycles. The most commonly cited mechanism for ovarian cancer is the incessant ovulation hypothesis which proposes that ovulation traumatizes the ovarian surface epithelium and thus stimulates proliferation, creating a milieu that predisposes to malignant transformation. 4 This may explain the apparent protective effects of oral contraceptives, late menarche, early menopause, multiparity, and breast feeding. Each of these factors decrease the occurrence of ovulation. 5 Ovarian tumours are insidious in onset and usually diagnosed at a late stage. 6 Patients with ovarian cancer commonly present with abdominal pain, a lump or menstrual abnormality. 7 Benign lesions occur at any age, but more common in reproductive age group. But malignant lesions come towards menopausal 50 - 60 years’ age group. Epithelial tumours comprise about 60% of all ovarian neoplasms and more than 90% of malignant tumours. 8

The present study is conducted in the department of pathology, G K General Hospital, Gujarat Adani Institute of Medical Sciences, Bhuj during August 1, 2018 to July 31, 2020. This is a prospective study wherein examination of ovarian lesions was carried out. The consecutive oophorectomy specimens were received in 10% formalin from the department of Obstetrics and Gynecology with requisition form having relevant clinical features, age, radiological findings, and provisional diagnosis. At the time of receiving weighing of the ovarian specimen was obtained. Gross photographs of external surface and cut surface of the resected ovarian specimen were taken. The tissue sections were processed for paraffin embedding, 3-5-micron thick tissue sections were obtained and stained with Haematoxylin and Eosin (H&E) stain, and special stains such as Periodic acid Schiff (PAS) were used as and when required. Immunohistochemistry (IHC) study was done as and when required.

The non-neoplastic and neoplastic lesions from representative sections were studied and classified according to World Health Organisation (WHO) classification 2014.

A total of 125 specimens of resected ovaries from 120 patients were studied. Five patient’s had different pathologies in both ovaries. 58 cases were non-neoplastic and remaining 67 cases were neoplastic. The age distribution with percentage of 120 patients the mean age of the patient was 36 years. The youngest patient was 8 years old, while the oldest patient was 66 years old. Most of the benign tumour were observed in the age group of 20-40 years, while most of the malignant tumour cases were common in elderly (>40 years) age group.

In present study most of the patients presented with abdominal pain followed by menstrual irregularities. Ascites and urinary complaints were least common presenting complaints. [Table 1].

Among the 67 neoplastic ovarian lesions 58(87%) cases were benign, 3(4%) cases were at borderline and 6 (9%) cases were malignant [Table 3]. In which 3 patients had bilateral ovarian tumours, while majority were unilateral.

In 58 benign ovarian neoplasms, most common seen lesion was serous cystadenoma 24 cases (36%) followed by benign cystic teratoma 13 cases (19%) and 11 cases (16.5%) of mucinous cystadenoma. Among the germ cell tumour, mature cystic teratoma was the most common followed by immature cystic teratoma. Whereas in sex cord stromal tumours two cases each of fibroma (Figure 2) and adult granulosa cell tumour (Figure 3). Out of total 6 malignant cases, maximum 5 cases were of high-grade serous cystadenocarcinoma (Figure 4) followed by one case of metastatic tumour. A case of bilateral metastatic ovarian neoplasm was seen in 20 year old female having Krukenberg tumour metastasize from gastric adenocarcinoma (Figure 5). The commonest gross morphology was the cystic in nature contributing to 79 %. The tumours presenting with cystic morphology were non-neoplastic and benign in nature especially of surface epithelial category. All three cases of borderline tumours were cystic and solid in morphology. Among tumours with solid or complex morphology, majority were malignant.

Comparison of distribution of neoplastic lesions in different studies

Comparison of distribution of ovarian Tumour in different studies (n=70) 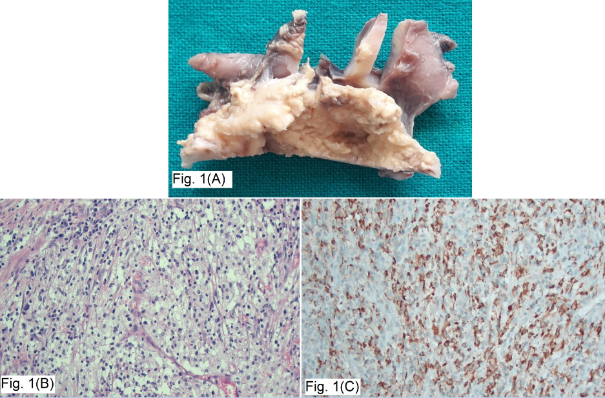 A: Shows enlarged, well-circumscribed solid white mass of ovarian fibroma; B: Shows spindle cells arranged in a fascicles and whorled pattern, nuclei are bland, wavy and fusiform with eosinophilic cytoplasm in a case of ovarian fibroma. (H & E x100) 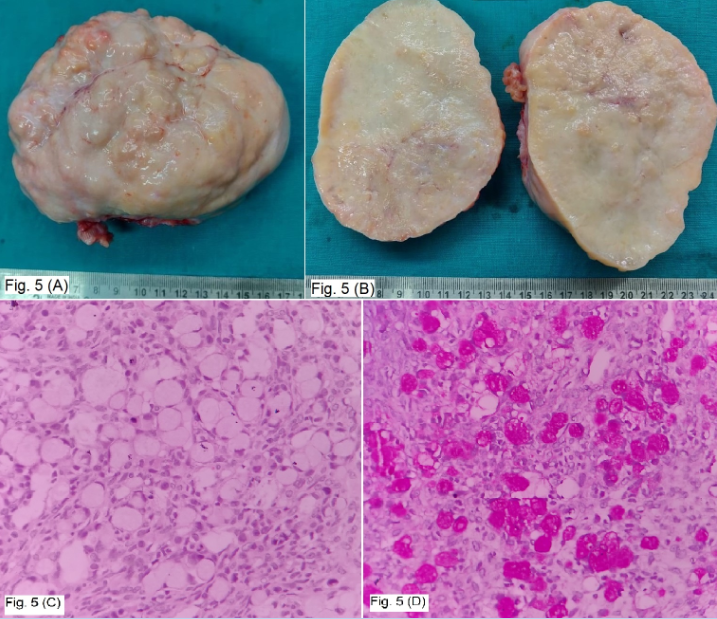 Ovarian cancer is the second leading cause of mortality among all gynecological cancers. Due to similar clinical presentations, there is confusion in the diagnosis of non-neoplastic and neoplastic lesions of ovary although it is diagnosed as a mass or cystic lesion on ultrasonography and hence removed prophylactically in routine oophorectomies and hysterectomies.

Age range of our patients was from 8 years to 66 years with mean age of 36 years. The most common affected age group was 30-39 years and 40-49 years is concordance with study done by Amin et al. 22

The non-neoplastic lesions like follicular cysts 12 cases (21%) are the commonly encountered conditions in present study. Incidence of these cysts were accordance with to Kreuzer GF et al. 23 (55% Follicular cyst) and Martinez-Onsurbe P et al. 24 (55% follicular cyst). Gupta N et al. 18 reported follicular cyst (80.2%). In the present study the incidence was 21%, which was lower than this study. Endometriosis is common condition found in women of reproductive age. In our study nine cases (16%) were reported. These findings were very high as compared to (2.9%) study done by Gupta N et al. 18 Al Fozen H and Tulandi T 25 in a study conducted for 6 year reported 340 lesions out of which 155 (45.59%) were ovarian endometriosis.

In the present study, out of 67 neoplastic cases most common lesions were benign followed by, malignant tumour and borderline malignancy. These findings were similar to studies done by Jha R et al. 9 Kayastha et al. 10 and Yasmin S et al. 11 Other studies recorded lower incidence of benign tumours. 12, 13 [Table-4].

Ovarian tumour may occur at any age, including infancy and childhood. Incidence rate, however increase with age, with the greatest number of cases being diagnosed beyond 4th and 5th decade. In our study, the youngest patient was of 8 year and oldest of 66 year, which was concordance with Kanthikar SN et al. 15

Based on histomorphological features, incidence of surface epithelial tumours was commonest (69%) followed by germ cell tumours (21%), sex cord (7%) and metastatic (3%). In this study, WHO classification of Tumours of Female Reproductive Organs 2014 (4th Edition) was implemented to classify the tumours. Surface epithelial tumours constituted the most common category in the present study contributing 69 % of all tumours followed by germ cell tumours, sex cord stromal tumours and metastatic tumours in decreasing order of frequency as seen in other studies from India and other countries. These findings correlated with study by Pilli et al., 12 Kanthikar et al.15 and Makwana et al. 14 [Table-5]

Benign serous cystadenoma was the commonest tumour type with 36 % of lesions. This was followed by benign mucinous cystadenoma having incidence of 16.5 %. Similar results were reported by Yasmin S et al., 11 Kanthikar et al., 15 Sawant et al. 16 Shaikh et al. 13 Among malignant tumours, serous cystadenocarcinoma was the most common. However, all four-study described in table showed higher incidence of serous malignancy. In borderline surface epithelial tumour category one case of borderline serous and two cases of borderline mucinous tumour were noted. Benign mature cystic teratoma was the most common germ cell tumour 13 cases (19 %) and 1 case was immature cystic teratoma which was similar to findings reported by Kanthikar SN et al.15 Whereas in category of sex cord stromal tumours two cases (3%) each of fibroma and granulosa cell tumour were reported, similar findings was reported by Kanthikar SN et al. 18 A single case of bilateral metastatic Krukenberg tumour was seen in present study which was similar findings to study of Shaikh et al. 13 (1.58 %) and Jha R et al. 9 (1.24 %). [Table-6]

There is inverse relation between ovarian cancer risk and parity. Parous women are at significantly lower risk than nulliparous women. In our study, incidence in nulliparity (15%) is comparable with Misra et al. 20 (16.00%) and Madan et al. 19 (14.54%).

Grossly, it was found that in our study benign tumours were cystic as compared to malignant, which were solid in consistency followed by partly cystic and partly solid which is similar to other studies where benign tumour were mostly cystic and malignant tumour predominantly showed solid and cystic or variegated appearance. [Table-7]

The ovarian lesions manifest a complex wide spectrum. Ovarian tumour categorizing according to the WHO classification help in early and accurate diagnosis as well as prognosis of ovarian tumour. Histopathological study is gold standard and in certain cases required immunohistochemistry to diagnosis and also to predict the prognosis.