Rai and Rai: Importance of fine needle aspiration cytology in revealing the spectrum of axillary swelling: An experience with 30 cases

Importance of fine needle aspiration cytology in revealing the spectrum of axillary swelling: An experience with 30 cases

Introduction: FNAC plays an important role in the early diagnosis of the axillary swelling. This study was conducted to document the spectrum of lesions on the patients that came for FNAC with the complain of axillary swelling.

Materials and methods: Present study was carried out at the Department of Pathology. A total of 30 cases of axillary swelling which were referred for FNAC in the department of Pathology, over the period of 3 months were retrospectively evaluated. All the stained slides of the cases were also reviewed.

Results: From 30 cases there were 13 males and 17 females. On examining the stained slides maximum number of cases presented with chronic granulomatous lymphadenitis followed by Reactive lymphadenitis , Lipoma, Ductal carcinoma metastasis of breast in axillary lymphnode, chronic non-specific lymphadenitis, One unusual case of Hydatid cyst who presenting with axillary swelling was also diagnosed.

Conclusion: FNAC is an important tool in differentiating benign and malignant lesions thus, helps in the proper management of the disease.

Axilla is a triangular area between the lateral wall of thorax and the upper part of arm. It contains various nerves, blood vessels, lymph nodes & fatty tissue, so it is very important to know the anatomy of axilla. The diagnosis of the nature of the lesions could be easily made by Fine Needle Aspiration Cytology. FNAC has been emerging as an important diagnostic modality. It is a safe, cheap, less traumatic and easy diagnostic tool to differentiate between benign and malignant lesions. In experienced hands it helps to make an accurate diagnosis with less false negative results.1, 2 Lymph nodes which are palpable and lymph node metastases from breast cancer are the most commonly encountered axillary masses However, various mesenchymal tissue elements are also present in the axilla such as fat, vessels and nerves which give rise to different lesions.3 A combined approach of imaging techniques and FNAC improves the diagnostic accuracy of diagnosis and helps in avoiding unnecessary invasive procedures.4, 5 This study was conducted to see the cytological spectrum of axillary lesions encountered in a tertiary care centre.

Present study was carried out at the Department of Pathology. A total of 30 cases of axillary swelling which were referred for FNAC in the department of Pathology, over the period of 3 months (1stjuly to 1stOctober 2021) were retrospectively evaluated, all these patients who presented with superficial palpable swelling in the axilla were included. All the air dried smears that were stained with May Grunwald Giemsa and the alcohol fixed smears which were stained with Hematoxylin and Eosin and Papanicolaou stains were reviewed, Zheil-Neelsen stained slides of the cases were also reviewed.

FNAC smears along with relevant clinical information like age, gender, surgical information and radiological findings were retrieved from cytopathology records. The findings of FNA slides were reviewed, analysed and tabulated.

Total 30 patients with palpable axillary masses came to OPD for FNA. FNAC was done and evaluated.

Distribution of cases according tothe Age

Distribution of cases according to Gender and cytological diagnosis 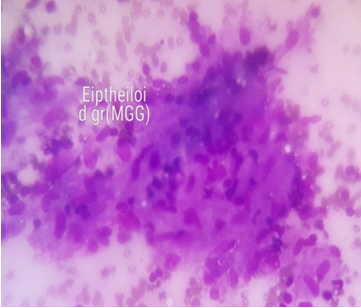 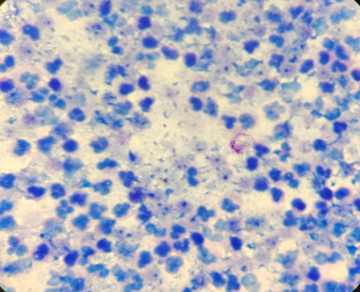 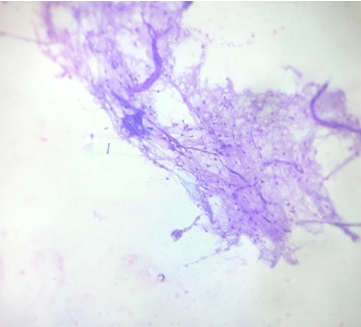 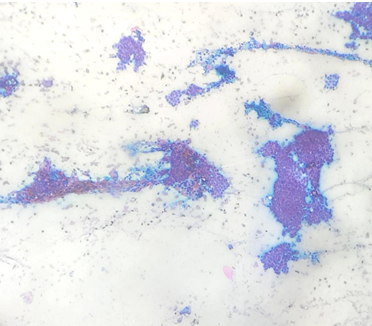 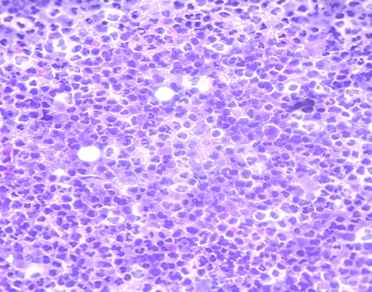 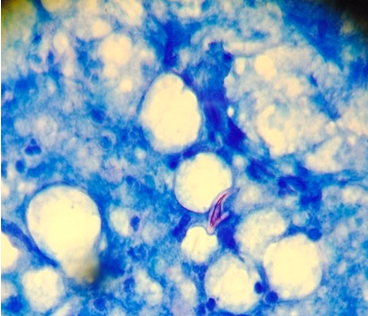 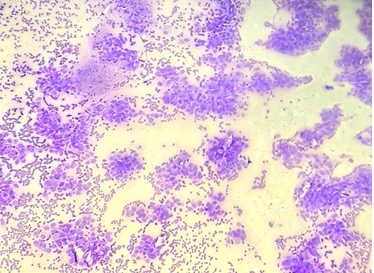 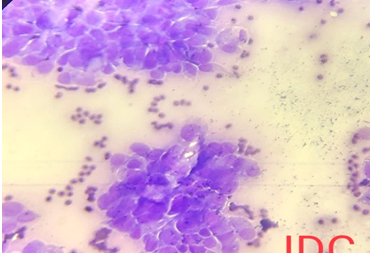 Ten cases out of 30 were cytologically diagnosed as the cases of chronic granulomatous lymphadenitis showing well-formed granulomas, Langhans and foreign body giant cells in the necrotic background. 8 cases were AFB positive whereas 2 were AFB negative.

1 case out of 30 showed the picture of chronic nonspecific lymphadenitis comprising of mature lymphocytes.

5 cases out of 30 were cytologically diagnosed as lipoma. The smears showed sheets of mature adipocytes and fibrous stromal fragments.

This was seen in 3 out of 30 cases. The cytological features showed loose clusters and sheets of malignant duct epithelial cells, the cells were pleomophric having raise N:C ratio, moderate amount of cytoplasm, nuclear enlargement with irregular nuclear membrane, coarse clumped chromatin. The background showed haemorrhage and necrosis.

One unusual case of hydatid cyst was seen in cytology: The MGG, H& E and PAP smears showed only necrosis but eventually on AFB the hooklets of the hydatid cyst were identified. The hooklets were semitransparent, refractile, and sickle shaped, with an inner semitransparent core of similar shape. Serological tests were performed for the confirmation which came out to be positive.

Axillary lesions are commonly encountered in lymphadenopathies, generally four cytomorphlogical patterns of lymphadenopathy were seen in our study like chronic granulomatous lymphadenitis, chronic nonspecific lymphadenits, reactive pattern and abscess formation. Apart, from the lymphnodes the other mesenchymal tissues present in the axillary region can also give rise to various lesions, the lesions may include accessory ectopic breast tissue, lipomas, hemangiomas, fat necrosis carcinoma of ectopic breast tissue rarely schwannoma, pilomatrixoma which has been discussed in certain studies and hydatid cyst as seen in our study are quite rare. FNAC is a simple, safe, rapid reliable and inexpensive method of establishing the diagnosis of lesions and masses at various sites and organs.7, 8, 9, 10, 11, 12

In our case chronic granulomatous lymphadenitis was the most common presentation of axillary swelling in which 8 were AFB positive. Granulomata are recognized cytologically as cohesive clusters of histiocytes of epithelioid type with or without associated multinucleated giant cells. a dirty necrotic background presence would suggest caseation and possibly tuberculosis13 since granulomatous inflammmation in lymphnodes may be seen in various non-neoplastic as well as neoplstic conditions like Hodkins, NHL and metastaic carcinoma 14 Sen et al in their study have given the spectrum of cytomorphological pattern that can be seen in tubercular lymphadenitis, they stressed without AFB it’s difficult to rule out tuberculosis and in that cases other causes of granulomatous lymphadenitis should be taken into consideration.

In our case 8 were AFB positive whereas in our case 2 were negative. The absence of necrosis does not rule out tuberculosis, and ZN staining for AFB is imperative in all cases of granulomatous lymphadenitis. As was seen in two cases in our study, in such cases demonstration of AFB both in direct smears and culture from aspirate is necessary.

in our study 8 cases were reported as reactive lymphadenitis which showed polymorphous population of centroblast, centrocytes, immunoblast, plasma cells and tingible body macrophages, 6 were females and 2 were males, this spectrum is seen in infections as well as malignancy in our study it was second most common cause of axillary swelling followed by chronic granulomatous lymphadenitis.

Detection of breast metastasis in the axilllary lymphnode plays a very important role in deciding the treatment of the patient since it helps in the staging of the tumour. In our study 3 cases were having metastatic deposits of ductal carcinoma breast in the axillary lymph node, which was confirmed on the histopathology also. Alkuwari et al found the sensitivity of FNAC to detect metastases was 60%15 whereas Hammon et al found sensitivity to be 100%. 16

One unusual case of hydatid cyst presented with axillary swelling was seen in our study. It’s causative agent is Ecchinococcus granulosus .Echinococcusgranulosus infection can develop in any organ or tissue, in humans hepatic and pulomonary localizations are more common.19, 20 The presence of axillary swelling as a cystic swelling is quite rare .The cystic swelling could be categorized into parasitic conditions as well as non-parasitic conditions. Non parasitic conditions include ganglionic cyst, inclusion cysts and cystic hygromas and other group includes parasitic conditions and includes toxoplasmosis, coenurosis, filariasis and echinococossis.21] The patient was 36 year old male and farmer by occupation, he presented with non-painful cystic swelling of 6cm diameter in axilla gradually increasing in size since 15 days. His blood tests (CBC and blood chemistry) were unremarkable. His USG of axilla showed a large cystic swelling of 8 cm in the axillary region, his USG abdomen was unremarkable. cytology of the aspirate from the axilla revealed the presence of hooklets in Ziehl-Neelsen stain positive, in many studies it has been documented that hoooklets of Ecinnnococcusgranulosus are Ziehl-Neelsen and Fite-Faraco positive.21, 22 Though cytology of hydatid cyst is not recommended in most of the studies due to fear of anaphylaxis and spread of infection, some studies have shown it to be relatively safe procedure for the diagnosis of hydatid cysts. In our case, this was an incidental finding on FNA as patient presented with subcutaneous axillary swelling. His compliment fixation test came out to be positive. So in endemic areas this differential diagnosis of cystic swelling in axilla should also be kept in mind.

Many rare tumours also arise in axilla. We saw a varied spectrum in the FNA of axillary swelling ranging from the most common granulomatous lymphadenitis to the rare hydatid cyst presenting as the axillary swelling.

FNAC is a safe, easy, cheap tool to differentiate between the benign and malignant lesions. It is the rapid and OPD procedure with minimal complications to the patients. If assisted by the radiological investigations its sensitivity further increases. This study highlights the spectrum of lesions that can present as the axillary swellings, which could be diagnosed on FNA which aids in the proper management of the case.