Conclusion: Cyclin D1 expression can be seen in PTCLs, besides mantle cell lymphoma, hairy cell leukemia and plasma cell myeloma and underline the importance of molecular biology integration tests as a diagnostic tool to escape the pitfall.

The cyclin proteins are important in the regulation of the cell cycle by activating cyclin dependent kinases at specific stages of the cell cycle, and thus promoting DNA replication and cell division. Mitogenic stimuli activate the tyrosine kinase receptor which triggers a signaling cascade, resulting in upregulation of cyclin D1. Aberrant expression of cyclin D1 can be due to chromosomal translocations, gene amplification or copy gains.1 The deregulation of cyclin-dependent kinases can lead to cancer by causing proliferation that is independent of the checkpoints and regulators. Genomic alterations such as the t(11;14)(q13;q32), which juxtaposes the cyclin D1-encoding gene (CCND1) to the immunoglobulin heavy chain gene are characteristic for mantle cell lymphoma. 2 Although cyclin D1 protein expression is well characterized in solid tumors and B-cell lymphomas, there is little data regarding cyclin D1 expression in peripheral T-cell lymphomas. 3, 4 The identification of cyclin D1 has treatment implications because cyclin D1 can be a therapeutic target.

In this case report, we describe 2 cases of peripheral T cell lymphoma with remarkable expression of cyclin D1. 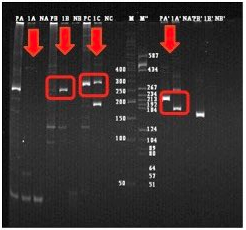 On the basis of this clinical presentation and histological findings was excluded a diagnosis of lymphoma with a leukemic presentation. On histological examination, both the lymph node biopsies showed a diffuse infiltrate of medium sized lymphoid cells with folded nuclear membranes, vesicular nuclear chromatin, inconspicuous nucleoli and a thin rim of eosinophilic cytoplasm; morphologically resembling mantle cell lymphoma. The tumor cells co-expressed CD5 and cyclin D1, however, surprisingly they did not express CD20. The cells were also negative for Pax5. Instead, they expressed T-cell associated markers- CD3, CD2 and CD7. CD4/CD8 analysis revealed CD4 predominant pattern of expression. The lymphoid cells did not express CD79a, CD10, TdT or CD34. Importantly, the lesional lymphoid cells did not express SOX11. The proliferation marker MIB1 was positive in almost 30% of cells in the second case. Therefore, these cases were diagnosed as non-Hodgkin lymphoma of peripheral T-cell type, NOS with cyclin D1 expression. (Figure 1, Figure 2)

The patient with inguinal lymph node enlargement was placed on GEMOX hemotherapy regimen (gemcitabine and oxalyplatin). Only one cycle of therapy was administered because of haematological and systemic toxicity, the patient died of disease two months after the diagnosis. While the patient with cervical lymphadenopathy, underwent chemotherapy: responded well and is doing well till date.

Cyclin D1 protein expression is commonly seen in B-cell neoplasms, classically in mantle cell lymphoma but also in hairy cell leukemia and plasma cell myeloma 5. It is seen in various normal tissues like salivary duct cells, gastric epithelium, tubular epithelium in kidney, epithelial cells of terminal bronchiole 6 as well as in non-hematological malignancies (non-small cell lung cancer, breast cancer, esophageal cancer, melanoma). 7 In this case report, we highlight that expression of cyclin D1 is not limited to B-cell lymphomas, but can also be seen in peripheral T-cell lymphomas.

Peripheral T-cell lymphomas (PTCLs) represent a heterogeneous group of non-Hodgkin lymphomas (NHL), characterized by poor outcome, accounting approximately for 10-15% of all non-Hodgkin lymphomas in the western countries, and with higher prevalence in Asia. 8, 9 These are highly aggressive and show poor response to therapy and frequent relapses. 10 Cyclin D1 G/A870 polymorphism has been implicated as a modulator of cancer risk and/or poor prognosis in human disease. 11 Cyclin D1 overexpression is not specific to any particular cancer, it is important in oncogenesis and proliferation of many tumors. Therefore, Cyclin D1 overexpression is a potential therapeutic target using agents that target the cyclin-dependent kinase pathway. 12 Staining for cyclin D1 protein in peripheral T-cell lymphomas may identify patients who might benefit from therapies that target cyclin D1 or its associated cyclin-dependent kinases. 13

In this case report, we emphasize the fact that the diagnostic pitfall represented by Cyclin D1 immunohistochemical overexpression in a T-cell lymphoma. Several pitfalls could lead to misinterpretation of diagnosis; therefore, we underlined the need to integrate the classical histology and immunohistochemistry with molecular tests as clonality or Fluorescence in situ hybridization.