Chromophobe Renal Cell Carcinoma (ChRCC) is a rare distinct subtype of Renal cell carcinoma. It arises from intercalated cells of the renal cortex. The cytomorphological features of ChRCC show significant overlap with Clear cell Renal Cell Carcinoma (CCRCC) and Oncocytoma. The prognosis of ChRCC is intermediate between benign Renal Oncocytoma and the relatively aggressive CCRCC. Hence, a correct pre or intra-operative cytodiagnosis helps in deciding the extent of surgery. We report a case of eosinophilic variant of ChRCC in a 70 years female, diagnosed on Fine Needle Aspiration Cytology (FNAC).The Immunocytochemistry (ICC), histology and Immunohistochemistry confirmed the diagnosis of ChRCC. Diagnosing ChRCC; especially its eosinophilic variant on FNAC is very challenging. Prominent cellular heterogeneity, pleomorphism, perinuclear halos and binucleation are important diagnostic clues for cytodiagnosis of ChRCC. In difficult cases, ICC helps in confirming the diagnosis.

Chromophobe Renal Cell Carcinoma (ChRCC) is a rare distinct subtype of Renal Cell Carcinoma (RCC). It has distinctive morphologic, histochemical, ultrastructural, cytogenetic and prognostic features.1 The prognosis of ChRCC is intermediate between Renal Oncocytoma and Clear cell RCC (CCRCC). Hence, a correct pre- or intra-operative cytological diagnosis can help to decide the extent of surgery.2 In this case report, we describe a case of eosinophilic variant of ChRCC of kidney diagnosed on Fine Needle Aspiration Cytology (FNAC). The immunocytochemistry (ICC), histology and Immunohistochemistry (IHC) confirmed the cytodiagnosis of ChRCC. 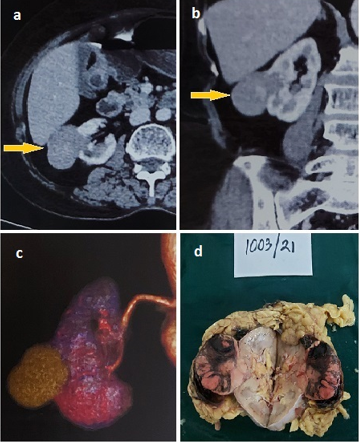 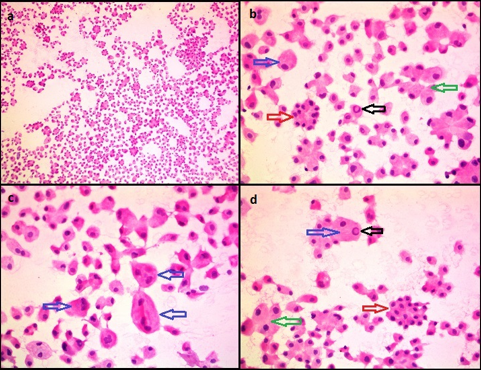 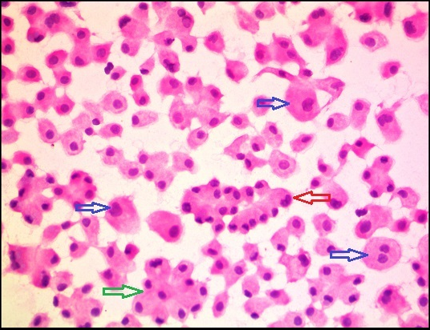 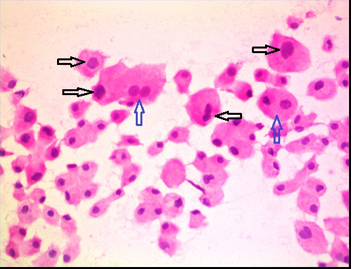 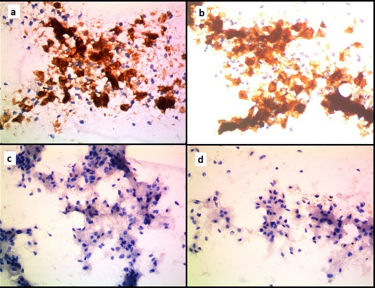 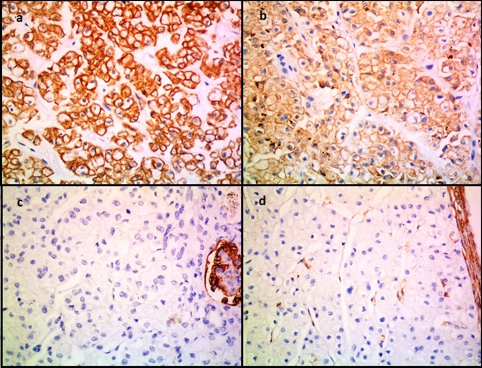 A seventy years female presented with right sided abdominal pain and urine retention since 15 days. Her routine blood investigations were normal. On abdominal ultrasonography, a mass of size 4.9x3.7 cm was noted in right kidney and a possibility of neoplastic etiology was suggested. Further evaluation with contrast enhaced computerised tomography (CECT) revealed a well defined, lobulated, solid, heterogenous, cortical based exophytic tumour in the mid lower pole. Considering these radiological findings, a possibility of renal cell carcinoma was suggested (Figure 1 a,b,c). Following the diagnosis of renal neoplasm, patient was then referred to the department of pathology for USG guided FNAC. FNAC revealed cellular smears comprising of tumour cells arranged in monolayered sheets, nests, tubules or as single cells. The smears exhibited remarkable cellular heterogeneity. Some cells were relatively small and most were of intermediate size. These cells were having abundant granular eosinophilic cytoplasm with large round central or eccentrically placed nuclei having irregular nuclear outlines. Frequent bi and multinucleation was seen. Occasional cells showed intranuclear inclusion. Some of the cells showed intra-cytoplasmic globules and perinuclear cytoplasmic clearing - halos. Some cells were extremely large and distended with cytoplasm having foamy appearance - Balloon cells. With these cytological features, we suggested a possibility of eosinophilic variant of ChRCC (Figure 2, Figure 3, Figure 4, Figure 5). Since, adequate numbers of cytology smears were available, we proceeded with ICC. On ICC, these cells expressed CK7 and CD 177 (C-kit) and were negative for Vimentin and CD 10. This confirmed a diagnosis of ChRCC (Figure 6).

Patient subsequently underwent right radical nephrectomy. The specimen measured 10.5x7.4x4.5cm. On cut section, a greyish tan to brownish solid well circumscribed tumour measuring 4.6x4.4x3.4 cm was noted in the mid lower pole (Figure 1d). On histology, the tumour cells were arranged predominantly in a solid pattern, separated by thin, incomplete fibrovascular septae. The cells were round to polygonal with well-defined cell borders and abundant eosinophilic, variegated cytoplasm. The cell size was variable and the three different sized cells with different cytomorphological features as seen in cytology were also seen on histology. The nuclei were pleomorphic with irregular nuclear membrane. Bi-nucleate cells with focal bizarre nuclei were seen (Figure 7). Thus, the histological features were consistent with eosinophilic variant of ChRCC. The histopathological diagnosis was confirmed by IHC. On IHC, the tumour cells expressed CK7 and CD117 and were negative for CD10 and vimentin (Figure 8). With these typical morphological and immunohistochemical features, a final diagnosis of eosinophilic variant of ChRCC was made. The patient is disease free 6 months after surgery.

ChRCC is a distinct variant of RCC comprising 2-5% of RCC. ChRCC is thought to arise from intercalated cells of the renal cortex. It is important to recognise this tumour because stage for stage, it has a significantly better prognosis than CCRCC and its morphological features overlap with benign Oncocytoma. The distinctive cytological features of this variant have been described earlier in few published reports and it is possible to identify this variant of RCC.9 Cytomorphology of ChRCC shows a characteristic pattern that allows differentiation from other renal cell tumours. Most smears show prominent cellular heterogeneity, pleomorphism, perinuclear halos and binucleation.9 The cellular heterogeneity is one of the most reliable features of ChRCC.10

Akhtar and Ali have first described this cellular polymorphism in ChRCC. They described these cells in three types: - Type I cells, were smallest in diameter and least frequent with a moderate amount of eosinophilic granular cytoplasm. Type II cells were larger than type I and characterized by presence of variably sized translucent and reticulated perinuclear zone within the cytoplasm. The peripheral part of the cytoplasm was similar to that seen in type I cell. Type III cells were much larger than the other two types with voluminous cytoplasm. The entire cytoplasm was translucent and reticulated. Some of these cells were extremely large and distended by reticulated cytoplasm (balloon cells).3 Our case showed marked cellularity with heterogeneity showing all three cell types. The predominant cell type we noted was type II and the larger balloon cells were also seen.

The nuclear features include pleomorphism, hyperchromatism, irregular nuclear outlines, nuclear grooves, pseudoinclusions, raisinoid appearance and inconspicuous and small nucleoli.1, 6 Bi-nucleate and multinucleate tumour cells are common.9 The cells have abundant granular to fluffy cytoplasm with perinuclear clearing (halos) and distinct cell borders classically described as ‘plant-like’ or ‘koilocyte-like’ tumour cells.1, 10 In addition to these findings seen in classic variant of ChRCC, our case showed predominance of cells with abundant granular eosinophilic cytoplasm giving superficial resemblance to Oncocytoma prompting us to label it as eosinophilic variant of ChRCC. Our case additionally showed large, peripheral punched-out intra-cytoplasmic vacuoles similar to those described by Salamanca et al in two of their cases.1

On cytological grounds, two renal neoplasms are generally considered in the differential diagnosis of ChRCC: CCRCC and Oncocytoma. CCRCC shows a more homogenous cellular appearance. Although pleomorphic, neoplastic cells can be recognised as a uniform cell population. The cells have greater tendency to be distributed as irregular aggregates intermixed with capillaries and metachromatic basement membrane material. The cytoplasm of clear cells usually shows fragility and an irregular outline, in contrast to the well-defined limits seen in ChRCC. Perinuclear clearing is absent. Finally, ChRCC rarely shows large nucleoli and bi-nucleation is much more common than in CCRCC.10

The second differential diagnostic consideration is Oncocytoma. There are many similarities between cytology of Oncocytoma and ChRCC. Both tumours present as single cells or small groups of cells with abundant, deeply stained cytoplasm. Bi-nucleation, nuclear pleomorphism and well-defined cell membranes can also be seen in Oncocytoma. These similarities can make them indistinguishable, especially in those cases of ChRCC in which the granular cell component predominates. However, the cellular heterogeneity seen in ChRCC is not present in Oncocytoma. The very large cells with abundant flocculent cytoplasm and small nuclei described in ChRCC are not seen in Oncocytoma.10 Similarly, the perinuclear clearing and pleomorphic nuclei with irregular membrane and occasional grooves are highly characteristic of ChRCC.1, 10 Although nuclear pleomorphism can be seen in Oncocytoma, it is not as prominent as that ChRCC. 10

Immunocytochemistry (ICC) plays an important role in definitive differentiation between ChRCC, CCRCC and Oncocytoma. Vimentin, CK7, CD117 (C-Kit) and CD10 are useful markers which most of laboratories have. Depending on the availability of number of cytology slides and the differential diagnosis in a given case, the cytopathologist should decide which antibodies to use. In our case, the typical cytopathology findings coupled with expression of CK7 & C-kit and negative CD10 & Vimentin established the cytodiagnosis of ChRCC. The histopathology and IHC subsequently confirmed the diagnosis of eosinophilic variant of ChRCC.

The literature regarding cytogenesis of CCRCC is abundant, but there are only few reports regarding the diagnosis of ChRCC. We reviewed all 12 articles published so far on cytodiagnosis of ChRCC.1, 2, 5, 9, 10, 3, 6, 4, 11, 12, 7, 8 The previously published cytological reports of ChRCC are summarised in Table 1. Overall 39 cases of ChRCC have been reported so far, of which 32 are in kidney. Total 30 cases were diagnosed on FNAC and 9 on imprint cytology. There were 4 cases of eosinophilic variant of ChRCC. 5, 4, 11, 12 Overall, this is 40th case and 2nd Indian case of ChRCC reported on cytology. Interestingly, this is just the 5th case of eosinophilic variant of ChRCC and first one in the Indian literature.

In conclusion, ChRCC has distinctive cytomorphological features which help in a specific cytodiagnosis in the appropriate clinical setting. Among these, cellular heterogeneity, distinctive nuclear features and perinuclear clearing are most useful in precise diagnosis. In difficult cases, judicious use of ICC facilitates the diagnosis.