Tonsillar Actinomycosis with presence of Epidermal inclusion cyst: Report of a rare entity

Epidermal inclusion cysts (EIC) are benign lesions that can be encountered throughout the body, but with a low incidence in the head and neck region. (1.6 to 7%) The various locations in this region where the cyst can arise are sublingual, submental, submandibular and buccal mucosa. EIC present in the tonsils are extremely rare and reported less than 0.01% in published English literature. We report a rare and incidental finding of epidermal inclusion cyst with actinomycetes in tonsil in a 57 year old male who presented with sore throat and difficulty in swallowing.

Epidermal inclusion cysts (EIC) are practically the same as epidermoid cysts, epithelial cyst, keratinous cyst, sebaceous cyst, milia, squamous inclusion cyst or the infundibular cyst. Epidermal inclusion cysts are benign lesions which can be developmental or acquired. In 1859, Rosen gave the term of epidermal cyst. EIC can be developed during the fetal period from abnormal epithelial components of ectodermal tissue or they may arise after trauma or surgery due to implanted epithelium.1, 2, 3 EIC can occur in any part of the body, with approximately 1.6-6.9% of cases in the head and neck area. In oral cavity, the most common affected site is floor of the mouth, but tonsillar location remains extremely rare (less than 0.01%).2 Treatment of EIC of the head and neck is surgical and also depends on the localization and the size of the lesion. Histopathological examination is of utmost importance in every resected tonsil to differentiate benign inclusion cysts from tonsillar squamous cell carcinomas.3, 4

Hereby, we report a case of epidermal inclusion cyst in the tonsil which was encountered as an incidental finding along with the presence of actinomycetes, with an emphasis on histopathological examination of resected tonsil. 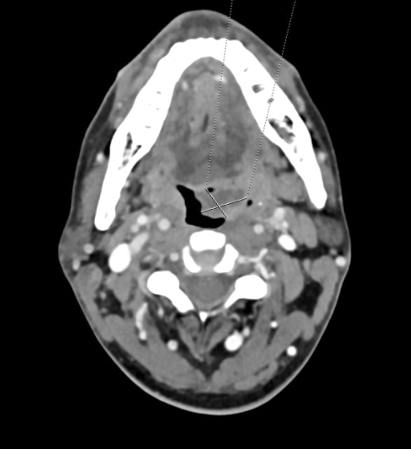 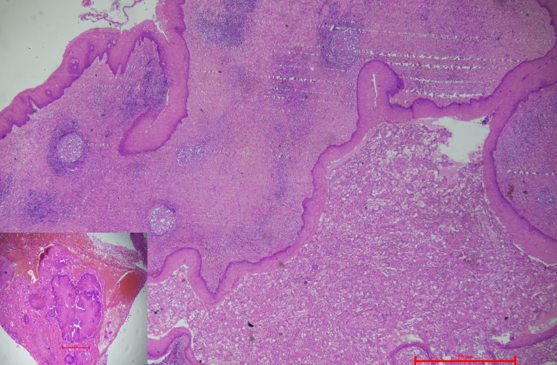 The palatine tonsil is a lymphoid tissue with an external lining of stratified squamous epithelium.4 Cysts in the oral cavity can be epidermoid, dermoid and teratoid.5 Microscopy is the best tool for definite diagnosis. Epidermal inclusion cyst is lined by simple squamous epithelium and its wall does not contain skin adnexal structures or fibrous elements. However, dermoid cysts contain skin adnexal structures and teratoid cysts contain all three germ layer components like muscle, bone, cartilage or fat. The male to female ratio with diagnosis of EIC in tonsil is 1:4, majority in the age group of 10-35 years.3, 5 Present reported case was a 57 year old male with cystic lesion suspected on CECT neck.

Pathogenesis behind the development of epidermal inclusion cyst proposed are the inclusion of ectodermal tissue during the embryogenesis or might be metaplastic change due to chronic irritation.3, 4, 5 In the present case presence of actinomycetes might be a chronic or prolonged irritant for the development of EIC. Histopathological examination is considered as gold standard which can easily differentiate these entities. Hence, gross and microscopy in every resected tonsillar mass is of utmost important. Complications of squamous inclusion cysts are rare, but can lead to infection, scarring, recurrence or rarely malignancy, if non-diagnosed or untreated.6 Post-surgical follow-up of the present case was uneventful.

Actinomyces are gram-positive, non-acid fast, anaerobic or microaerophilic filamentous branched bacteria which are very difficult to grow in culture, less than 30% of cultures being positive for this bacterial infestation. Cervicofacial region is the most common area of involvement by actinomyecetes.6 The pathogenesis is associated to its capacity to act as an intracellular parasite and thus resist phagocytosis as well as its inclination to spread without respect for well-established tissue plains.3, 4, 5, 6

Treatment for these lesions is surgical excision of the cyst or tonsillectomy, depends on the clinical presentation.5, 6 Intact excision of tonsil is important as its contents could have an irritating effect on the surrounding fibrovascular tissue. Excised tonsils must be sent for histopathological examination for correct treatment and importance of follow-up due to increased risk of recurrence.

To conclude the importance of this case report, is to highlight the rarity of epidermal inclusion cyst and actinomycetes in the tonsil together, and one might be the cause of another entity. Clinically patient might represent as difficulty in swallowing and can mimic malignancy. Surgical intervention is compulsory with histopathological examination, in each and every case to differentiate between benign and malignant pathology and to start correct treatment with importance of regular follow-up.