Background: Nodular fasciitis is rarely reported in breast. It is benign reactive proliferative lesion of fibroblast.

Conclusion: We are presenting this extremely rare case of nodular fasciitis of breast for its clinical, radiological and histopathological findings.

Nodular Fasciitis is an extremely rare benign reactive proliferative lesion of breast which was included as mesenchymal tumor of breast by the WHO classification in 2012. 1 Despite of its benign nature it resembles breast cancer in term of its clinical course and imaging findings. The mammographic appearance of breast fasciitis is that of a dense, irregular or spiculated nodule, with poorly defined margins. On FNAC and core biopsy, it is difficult to give specific conclusive diagnosis. Excisional biopsy is essential for confirmatory diagnosis and to avoid unnecessary surgical intervention. 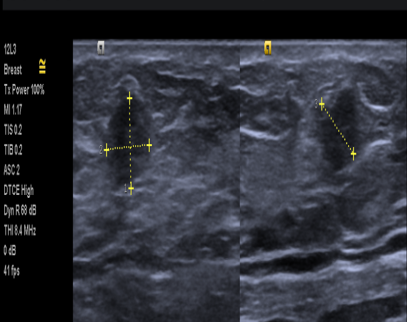 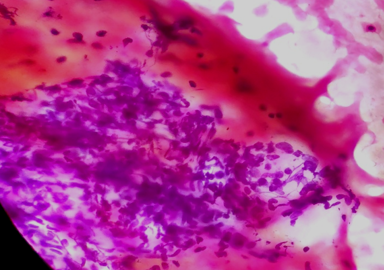 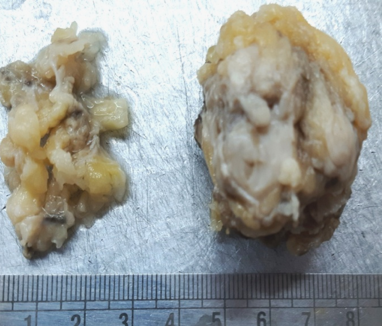 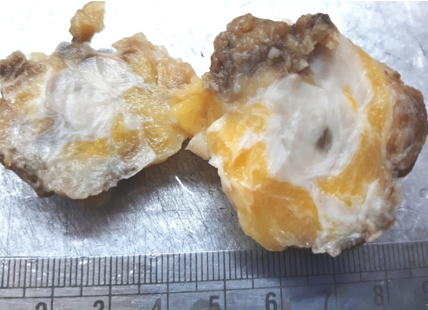 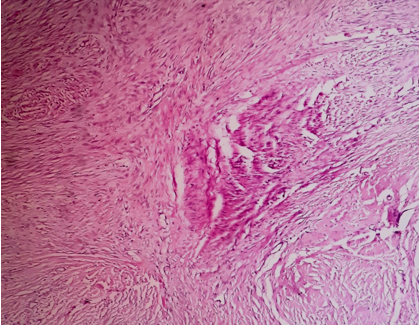 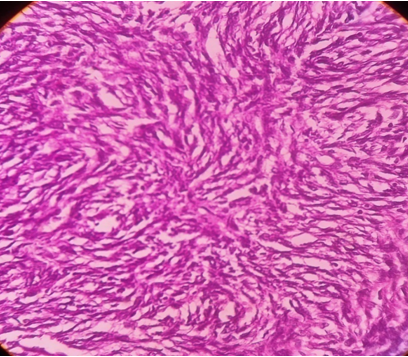 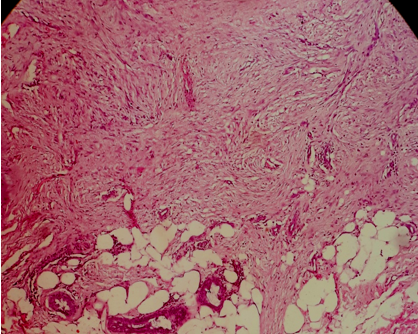 Nodular fasciitis was first described by Konwaler.2 Nodular fasciitis is a benign lesion due to proliferation of fibroblastic and myofibroblastic cells within subcutaneous tissue.3 It is commonly noted in soft tissue of upper limb and trunk. Nodular fasciitis in breast is extremely rare with approximately 150 cases reported. 4 The local injury to breast may trigger the fibroblastic proliferation and considered as one of the etiopathogenesis factor for nodular fasciitis breast. 5 The lesions of nodular fasciitis are similar to breast cancer on clinical and radiological imaging. 6 Clinically tumor grow rapidly. The age ranges from 17-84 year (average of 39 year). The size range from 0.5 to 5.5cm (average of 1.9cm.) In our case two nodular, irregular masses were detected. The lesions are firm to hard and irregular margins. The history of local trauma to breast is noted in 10-15% of cases. 7 On FNAC and core biopsy it is difficult to diagnose preoperatively. In our case reported as spindle cell neoplasm on FNAC. On USG and mammography most of the cases are reported as malignant. Mammography reveals an irregular, often spiculated lesion and ultrasonography detects an infiltrative mass without a capsule. The margins are often irregular. The perilesional invasion of the breast or fatty tissue is noted in many cases and mimic malignancy. The confirmatory diagnosis is only on histopathological examination which shows benign spindle cell proliferation of varying cellularity with irregular, infiltrating margins. The tumor is arranged in storiform pattern, short bundles. The individual cells are elongated having elongated nuclei with scant cytoplasm. Areas of atypia and cells with prominent nucleoli also noted. No pleomorphism and mitosis was noted. Background shows scanty myxoid material. For confirmation immunohistochemistry was done and which gives positivity for smooth muscle actin and vimentin and negative for ER,PR,HER2/neu. The differential like Fibromatosis, Myxoid sarcoma, Myofibroma, Phyllodes tumor etc. should be considered. In Fibromatosis large masses with usually dense collagenous stroma and linear fascicles of cells are noted.