Cutaneous ciliated cyst are relatively rare benign lesions, found in the dermis or subcutis of the lower extremities of young females in their second and third decades. The cysts are typically lined by ciliated cuboidal to columnar epithelium, showing pseudostratified areas and focal squamous metaplasia is occasionally present. Immunohistochemical studies have demonstrated that the cysts can be PR and ER positive, similar to the epithelia of the fallopian tubes. The pathogenesis of the cyst is yet being studied, some hypotheses have been proposed including the Mullerian heterotopias, ciliated metaplasia of eccrine sweat glands, and embryonic remnants of the cloacal membrane. We report a cutaneous ciliated cyst over the right gluteus area in a 29 year old female. On histologic examination, the cyst was lined by ciliated columnar epithelium, showing occasional papillary projections.

Cutaneous ciliated cysts (CCC) are benign lesions whose exact pathogenesis is unknown. First described by Hess 1 in 1890 on the lower back of a 15-year-old girl and later termed ‘‘cutaneous ciliated cyst’’ by Farmer and Helwig 2 in 1978. These lesions are often clinically misdiagnosed as an epidermal inclusion cyst, adnexal cysts or simply a lipoma.

Most commonly the ciliated cutaneous cysts are found in the dermis or subcutis on the lower extremities of young females. Cyst growth typically occurs after puberty due to, according to theory the effect of hormonal influence. The cyst is lined by a cuboidal to columnar ciliated epithelium, with some areas of pseudostratified ciliated epithelium and focal areas of squamous metaplasia. Papillary projections are often seen in the lumen of the cyst.3 However, outliers of cutaneous ciliated cysts, including those in male patients and in unexpected locations such as the scalp, finger, and scapular area, have been reported.4

Some hypotheses have been proposed including the Mullerian heterotopias, ciliated metaplasia of eccrine sweat glands, and embryonic remnants of the cloacal membrane.

The similarities between fallopian tube lining epithelium and CCCs are numerous and Mullerian heterotopia has been proposed as a hypothesis to explain the lesion’s pathogenesis.5 The theory has been endorsed by some authors and refuted by others.

An alternative hypothesis, that is, ciliated metaplasia of eccrine sweat glands, has been proposed for CCC cases that cannot be easily explained by the Mullerian heterotopia theory. 3 We report a cutaneous ciliated cyst over the right gluteus area in a 29 year old female.

A 29-year-old female patient came to the general surgery outpatient department with complaints of swelling on her right gluteus region, present since 5 years. There was no history of previous trauma or significant medical problems. The mass had gradually increased in size but was otherwise asymptomatic. On examination, the swelling was 4 x 3 x3 cm in size, non-tender, non hyperaemic and cystic in nature. Radiological impression on ultrasonography gave differentials of inclusion cyst and sebaceous cyst. The cyst was excised and was sent for histopathological examination in 10% buffered formalin used as the fixative. 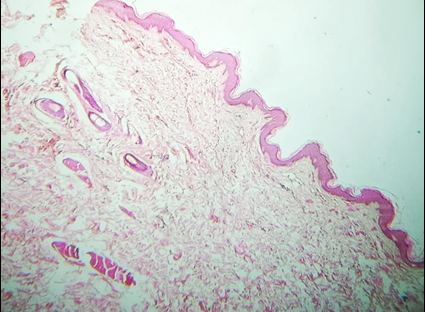 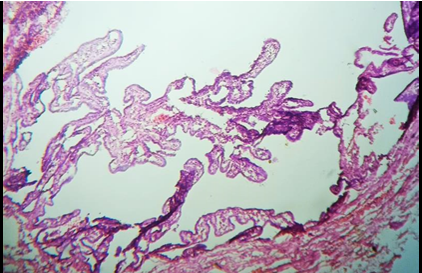 H&E (100x): Ciliated cyst along with the dermis showing the subcutaneous fat 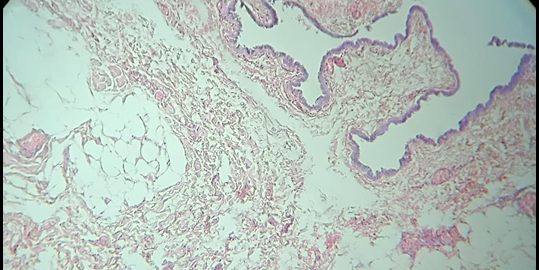 Grossly, we received a skin covered cyst measuring 3x2x1 cm. Cyst wall was thin brown, uniloculated. The tissue was processed and stained with hematoxylin-eosin (H&E) On microscopic examination, the cyst was lined by columnar ciliated epithelium with occasional papillary projections (Figure 2) The lining epithelium resembled fallopian tube epithelium. The subepithelial tissue was fibrocollagenous and showed few adipocytes (Figure 3). A final diagnosis of cutaneous ciliated cyst was given. Due to logistic reasons we were unable to perform any special stain on the tissue.

Cutaneous ciliated cysts are rare and asymptomatic lesions that are usually benign. In 1890, Hess first reported a case on the lower back of a 15-year-old girl. Farmer and Helwig later proposed the term cutaneous ciliated cyst for this entity after studying 11 cases in 1978. In the report, all 11 cases were observed on the lower extremities of female patients whose age ranged from 15 to 30 years, and the cyst wall was noted to have a ciliated epithelial lining resembling that of the fallopian tube 1, 2. In our case, the cyst was overlying the gluteal area, it measured 4 cm in the greatest dimension and was non tender, these findings were in concordance with the findings in literature.6

The lesions typically measured several centimeters in diameter and presented as unilocular or multilocular cysts. A study describing the cysts histologically, reported that the cysts are typically lined by ciliated cuboidal to columnar epithelium with pseudostratified areas and that focal squamous metaplasia is occasionally present.3 Previous reports indicated the cysts as varying from 1 to 4 cm in size, and the cysts are generally soft in texture and non tender masses.6

The etiology is yet to be completely understood, however so far there are few theories that are still being studied. The first is that they are an ectopic mullerian residue as they resemble the fallopian tube epithelial lining. Mullerian rest cells arrest at various levels and grow to form cysts, under hormonal stimulation after reaching puberty. 1, 6, 7 According to the mullerian heterotrophy theory, the fallopian tubes develop from remnants of the paramesonephric duct during the 6-7th weeks of gestation in the embryologic period.6 It is possible that these cells could detach and incorporate within the lateral mesoderm and thus, migrate locally in the area of the lower back, abdominal wall, or lower limb bud.3 Besides these it can reach the scalp, fingers, heels, or knees during this period.

The more frequent incidence in girls, occurrence of these cysts after puberty, positivity for sex hormone receptors, estrogen receptor (ER) and progesterone receptor (PR), and positivity and negativity for carcinoembryonic antigen (CEA) on immunohistochemical staining support the mullerian heterotrophy theory.4

Cutaneous ciliated cysts may be observed in distant sites due to vascular and lymphatic distribution.1, 3

The second theory is that they are formed due to ciliated metaplasia of eccrine glands. The eccrine metaplasia hypothesis was proposed following the identification of morphologically similar cysts in male patients.9

An eccrine origin is a possibility because fetal eccrine ducts and eccrine spiradenoma reportedly contain ciliated cells.10 However, normal eccrine glandular tissue stains positively for CEA, whereas most male cases were negative for CEA.11 Another possible explanation is that if the cutaneous ciliated cysts in male patients originated from Mullerian heterotopia, the cilia could have got degenerated in the microscopic examination because of prolonged estrogen depletion.12

Some authors have suggested that CCC could have originated from an embryonic remnant of the cloacal membrane because of the observed perineal locations of the cysts.11

To accurately evaluate the pathophysiology of ciliated cutaneous eccrine cysts, more cases need to be collected under exact criteria and compared with previously reported cases in various ways.

In summary, cutaneous ciliated cysts are primarily observed in young females involving frequently lower extremities. These cysts may be misdiagnosed as inclusion cysts, lipomas, adnexal cysts, bronchogenic cysts, or pilonidal cysts. Although the physiopathology of the cutaneous ciliated cysts are still not fully understood, surgical excision and immunohistochemical studies of the specimen are crucial in order to make a definitive diagnosis.

A I Al-Nafussi P Carder Cutaneous ciliated cyst: a case report and immunohistochemical comparison with fallopiantubeHistopathology1990165958

K Hashimoto B G Gross W F Lever The ultrastructure of human embryo skin. II. The formation of intradermal portion of the eccrine sweat duct and of the secretory segment during the first half of embryonic lifeJ Invest Dermatol196646651329