Giant chondroid syringoma of the eyelid

Chondroid syringoma is a rare mixed tumour of sweat gland origin that is characterised by sweat gland elements in a cartiliginous stroma. Its an uncommon cutaneous tumour of head and neck region with a reported incidence rate of 0.01% to 0.1%. Its occurence in periorbital tissues is rare and usually are small in size. Here we report a case of giant chondroid syringoma (>3 cms) arising in the lower eyelid.

Chondroid syringoma is a rare mixed tumor occuring in the head and neck region that accounts for only 0.01% of all primary skin tumors.1 Review of literatures shows only a minority of cases arising in periorbital tissues.2 They are usually slow-growing, asymptomatic, solitary and nonulcerating masses ranging between 0.5 to 3.0 cm in size.3 A size of 3 cm greater carries a higher risk of malignant potential. Here we report a rare case of giant chondroid syringoma arising in the lower eyelid since past 5 years.

A 45-year-old male presented with a large mass on the right lower eyelid (Figure 1). The mass had been present since five years, with more rapid growth since a year and complains of dryness of eyes, occasional pain and throbbing in the lesion on and off. On physical examination, the mass was nontender, multilobulated, firm, and freely movable. No other rashes or lesions were noted along the eyelid. Routine opthalomological screening like Visual acuity, extraocular movements, confrontation visual fields, were within normal limits. FNAC done in our department revealed good number of plasmacytoid cells in clusters and dispersed manner in abundant chondromyxoid material. No cytonuclear atypia seen. FNAC findings were suggestive of Chondroid syringoma (Figure 2a,b,c). The tumor was then excised en bloc under general anesthesia and the site repaired with a laterally-based skin-muscle flap and a tarsal strip to tighten the lid margin.The resected tumor was send to our department for Histopathological analysis .Grossly a smooth multilobulated mass covered with an ellipse of skin measuring 50x35x30 mm (Figure 3). Histopathological analysis revealed an encapsulated tumor within the dermis containing both epithelial and mesenchymal components (Figure 4a,b,c,d).The epithelium was composed predominantly in sheets and few tubules lined by single layer of low cuboidal epithelial cells surrounded by myoepithelial cells. Myoepithelial cells blended into the surrounding stroma, in some areas forming sheets. The surrounding stroma contained large amounts of cartilage and some bone fragments. No atypical cells or mitoses were noted. Diagnosis of Eccrine chondroid syringoma, a benign mixed tumor, was confirmed. 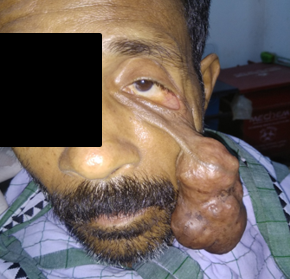 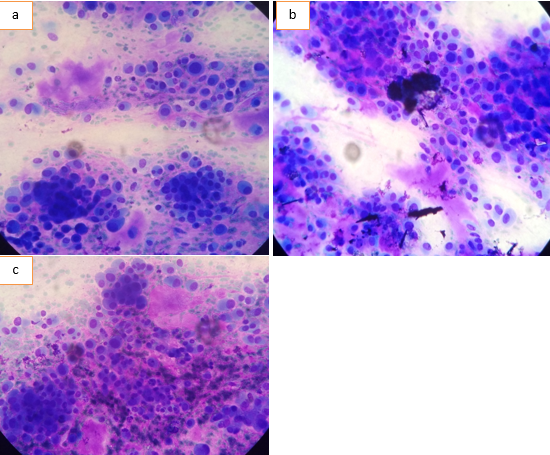 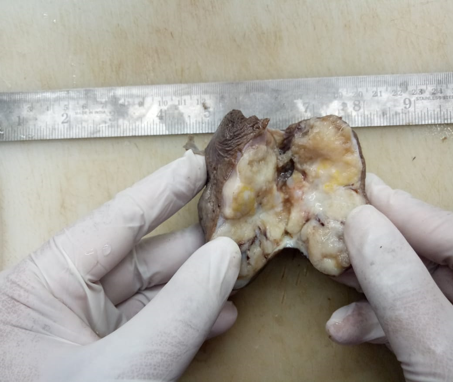 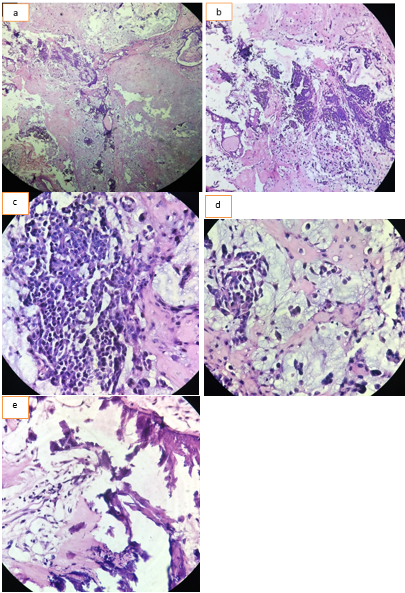 Chondroid syringoma as described by Bilroth in the year 1859 is a skin appendage tumor histologically similar to the mixed tumour (pleomorphic adenoma) of salivary gland. Hirsch and Helwig later classified this tumor type as chondroid syringoma in 19611 due to the presence of sweat gland elements in a cartilaginous stroma.

It usually affects middle-aged individual with a male predominance and affects head and neck region. 4 It presents as an aymptomatic, firm, slow growing, solitary nodule and usually ranges in size from 4 to 17 mm as reported in eyelid lesions. Review of literature, revealed no well known risk factors for chondroid syringoma and Only 26 cases of chondroid syringoma in the periorbital region were reported through 2006. 2 There is only one other recent report of giant chondroid syringoma (> 3.0 cm) of the eyelid. 5

The differential diagnosis of chondroid syringoma may include neurofibroma, dermoid cysts, sebaceous cysts, dermatofibroma, salivary gland, pleomorphic adenoma, or basal cell carcinoma. 6 There are no specific signs to differentiate chondroid syringoma from other eyelid tumours.Histopathology remains the gold standard criteria for diagnosis that demonstrates nests of cells and ducts surrounded by chondromyxoid stroma. 7

Headington 8 classified chondroid syringoma into eccrine and apocrine types, based on the cells of origin. The apocrine type is more common and is characterised by haphazard distibution of epithelial and stromal components. The epithelial component presents broad sheets of squamous epithelial cells or tubular branching lumina lined by two layers of epithelial cells (inner cuboidal cells show cytokeratin and epithelial membrane antigen positivity and outer flattened cells show S-100 and vimentin positivity). The eccrine chondroid syringoma on the other hand is characterised by a homogenous to monotonous pattern, the epithelial component presents small tubular lumina lined by single layer of epithelial cells that are evenly separarated in a chondroid matrix. Sometimes tumours may display both features of eccrine and apocrine differentiation 9 The mesenchymal stroma may be chondroid as in the present case, or myxoid, adipocytic or fibrous .Rarely osteoid stroma and mature adipocytes may be observed. 1 Chondroid Syringoma may at times present with certain atypical features, i.e., extensive ossification, extensive cystic changes, predominantly chondromyxoid stroma with scant epithelial component, giant size, and atypical location, that can pose diagnostic challenge in diagnosis.

The risks of malignancy in chondroid syringoma increases when the lesion is greater than 3 cm in size.10 Malignancy usually arises denovo or more rarely arise in a preexisting benign chondroid syringoma.3 As per review of literatures only 30 cases had been described as of 2013.11 that effected mostly women (1.7:1) and in the extremities 60%,20% in the head and neck.12 Features of malignancy includes nuclear atypia, increased mitotic figures, infiltrative margins, sattelite tumour nodules and tumor necrosis.13 Treatment is mostly surgical biopsy and such patients should be under close follow up due to risk of recurence.

Chondroid syringoma although rare should be considered in the differential diagnosis of large eyelid masses. As chondroid syringoma doesnt exhibit any typical clinical manifestation, one needs to resort to biopsy for confirmation to facilitate adequate management.