Filariasis is a major health problem in many tropical countries including India. Most commonly affected organs are lymphatics of lower limbs, retroperitoneal tissue, spermatic cord, epididymis and breast. Despite high incidence, it is infrequent to find microfilariae in fine needle aspiration cytology smears and body fluids. Microfilaremia is usually detected in blood or skin specimens. Cytological examination with FNAC is an investigation of choice especially in patients with evident swelling with difficult clinical diagnosis. We present a case of spermatic cord microfilariasis in a 32 years male presented with right scrotal swelling with dancing filarial sign on ultrasonograpghy, while the peripheral blood smear was negative for the organism.

Filariasis is a major parasitic disease in many tropical and subtropical countries. It is endemic in India, especially in the states of Bihar, Jharkhand, West Bengal, Uttar Pradesh, Orissa, Kerala, and Gujarat. 1 It is caused by Wuchereria Bancrofti which is transmitted by the bite of various mosquitoes as a vector where the maturation process takes place and enters the patient via puncture holes. The parasite matures within 6–8 months and mates to release microfilariae that migrate to peripheral blood in diurnal fashion. The microfilariae are re-ingested by the mosquito and re-infected into the patient to complete the cycle. 2

The parasite is primarily confined to Lymphatic channel or lymph nodes where it can remain viable for more than two decades. The most common presentation of the disease is asymptomatic, subclinical microfilaremia, Hydrocele, acute adeno-lymphangitis (ADL) and chronic lymphatic disease. 3 It is estimated that in endemic areas, over 40 million persons suffer from the chronic disfiguring manifestations of filariasis. These include filarial hydroceles, lymph scrotum, or elephantiasis of the scrotum. 4

A majority of infected individuals in filarial endemic communities are asymptomatic. Conventional mode of diagnosis of filariasis is by demonstration of microfilaria in peripheral blood smear. Despite high incidence, it is infrequent to find microfilariae in fine needle aspiration cytology smears and body fluids. 5

A 32 years male presented to the Surgical OPD with right scrotal swelling since 1 week which was gradually progressive in size and associated with dull aching pain. There was no history of fever, skin rashes, lymphoedema or any history of trauma was present.

On local examination, scrotum revealed small, firm, ulcerated mass in right posterior side of approximately 1x1 cm in size. There was no tenderness, erythema or induration. Illumination test was found to be negative. No regional lymph nodes were palpable. Routine examination of chest, cardiovascular andabdominal cavities revealed no abnormality. Complete blood count was done and differential count showed increased eosinophil count with absolute eosinophil count raised to 700 cells per microlitre of blood. Other routine haematological investigations and urine examination were found to be within normal limit. 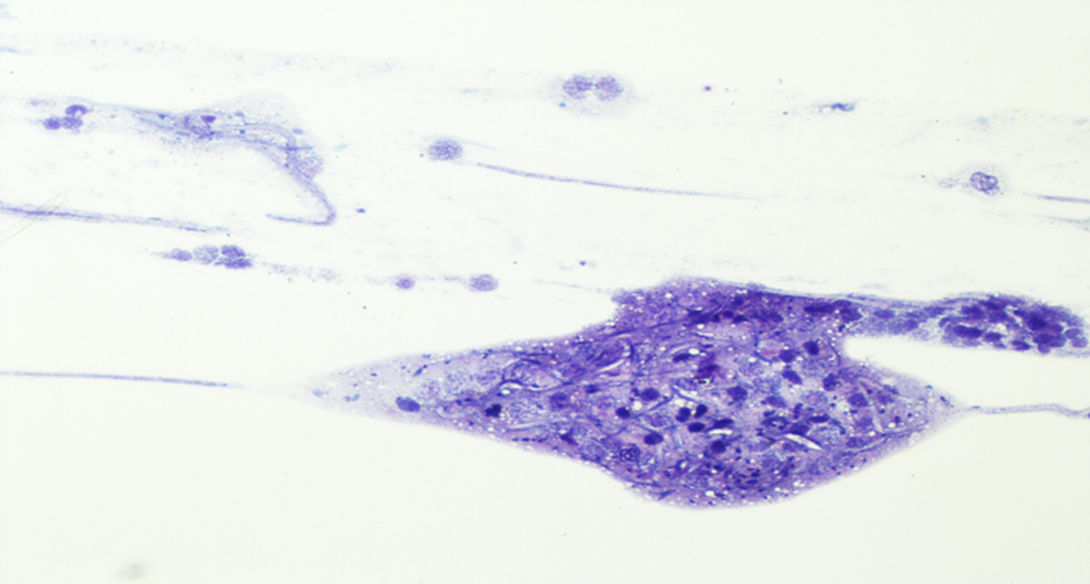 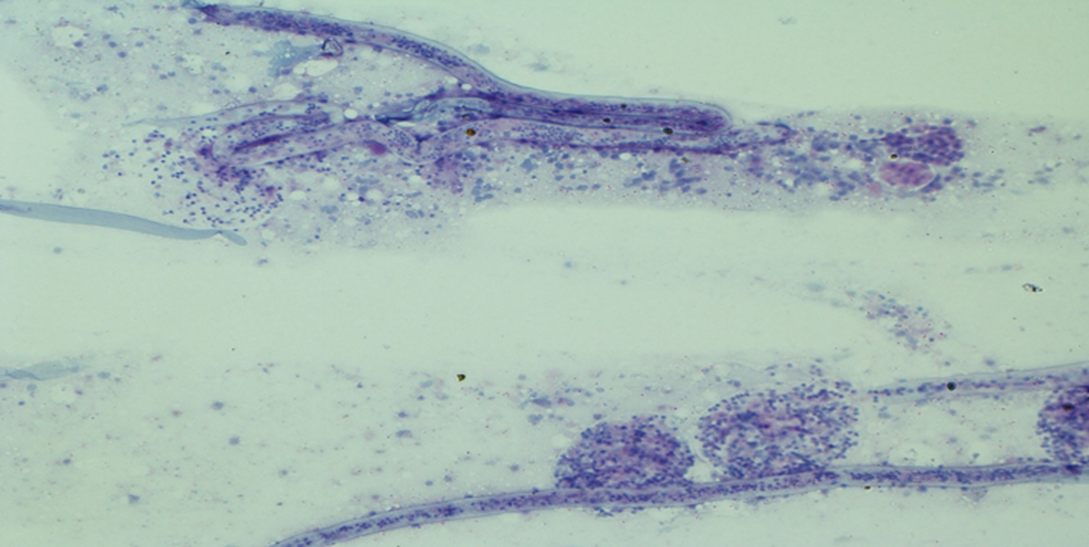 Our patient was given Diethylcarbamazine (6mg/kg) for two weeks along with tablet levofloxacin and Pantoprazole, following which the swelling subsided and the absolute eosinophil count normalized.

Filariasis is a major health problem in many tropical countries including India. In India, most of the filariasis is caused by W.bancrofti (95%) and Brugia malayi (5%). Most commonly affected organs are lymphatics of lower limbs, retroperitoneal tissue, spermatic cord, epididymis and breast.3, 6

The clinical manifestation can vary according to the phase which can be acute or chronic. Some patients can be asymptomatic for many years. The acute phase is usually associated with microfilaremia and eosinophilia. Microfilaremia is usually detected in blood or skin specimens. 7 In our case, patient presented with scrotal swelling and mild pain associated with difficulty in walking and running. There was no evidence of lymphoedema or hydrocele. Complete blood count showed increased eosinophil count with raised absolute eosinophil count to 700 cells per microlitre of blood while other hematological and biochemical parameters were within normal limit.

Laboratory studies for detecting filariasis include smears, serology, PCR, and biopsy. Microfilaria in the peripheral blood smear, chylous urine, or hydrocele fluid in the scrotum are diagnostic. Thick smears are better than thin smears and light spin of blood and a buffy-coat smear can show microfilariae. 7, 8

Ultrasound can be used to diagnose an adult W. Bancrofti worm infection in asymptomatic males with microfilariae, The worms tend to thrash in nests of the scrotal lymphatics called the Filaria dance sign. 8, 9 In our case ultrasound showed hypoechoic lesion with linear multiple mobile echogenicity representing dancing filarial sign.

Cytological examination with FNAC is an investigation of choice especially in patients with evident swelling with difficult clinical diagnosis. In our case, imprint cytology smear showed microfilaria, while the peripheral blood smear was negative for the organism. Filariasis is more often an incidental finding rather than being a primary diagnosis. 10, 11 The finding of a microfilariae in the firm scrotal swelling in our case was also considered incidental as no history of filarial illness was elicited.

Circulating filarial antigen test (CFA) has recently revolutionized the diagnosis of filariasis due to its ease to perform with just a finger prick, non-dependence on microfilariae, avoidance of diurnal variations as opposed to cytological tests and high sensitivity and specificity as compared to the other investigations. 12, 13

Diethlycarbamazine (DEC) is the drug of choice for treating lymphatic filariasis. 14 DEC causes a rapid disappearance of microfilariae from the circulation and acts as considerable microfilaricidal against the lymphatic filarial parasites. Doxycycline is also recommended to treat adult worm. Other treatment options include surgical excision, if the condition worsens. 15 Our patient was given Diethylcarbamazine (6mg/kg) for two weeks along with tablet levofloxacin and Pantoprazole, following which the swelling subsided and the absolute eosinophil count normalized.