Xanthomatous meningioma is a WHO grade I metaplastic meningioma where neoplastic cells contain lipid-filled vacuolated cytoplasm. The origin of xanthomatous meningiomas is believed to be from meningothelial cells but diagnosis remains difficult because of their close resemblance with the histiocytes. Peculiar radiographic features may aid in diagnosis, however, definitive diagnosis requires immunohistochemical staining. We report a case of 43-year-old male with sphenoid wing meningioma revealing xanthomatous changes and received treatment as grade 1 meningioma. Though the exact pathophysiology remains unknown, we believe focal or gross metaplastic changes lead to transformation of tumor cells into the xanthomatous subtype. Authors discuss this interesting a rare histologic variant with discussion of the relevant literature.

Meningiomas are the most common primary intracranial tumor comprising approximately 33.8% of all Cranial Nervous System (CNS) tumors. 1 Currently, 15 different histological subtypes are known, and been categorized into WHO grade I, II and III. 2 Grade I constitute approximately 65-85% of all meningiomas. 3 Metaplastic meningioma is WHO grade I, which includes tumors containing different mesenchymal tissues i.e. osseous, cartilaginous, lipomatous, myxoid, or xanthomatous material. 4 Metaplasia is defined as “reversible transformation of one cell type into another different mature cell type”. Xanthomatous meningioma is a rare variant of metaplastic meningioma, which shows predominant xanthomatous tumor cells having central nucleus with vacuolated cytoplasm distributed in focal or diffuse pattern.

A 43-year-old man presented with signs and symptoms of raised intracranial pressure. MRI brain was suggestive of 5.0 X 5.0 cm well circumscribed T1-hypo to isointense, T2-iso to hyperintense, heterogeneously contrast enhancing lesion with dural tail and attachment along the right sphenoid wing with mass effect. There was patchy T1 hyperintensity within the tumor. There were signs of raised intracranial pressure in the form of prominent perioptic CSF space, tortuosity of the optic nerve sheath and flattening of the optic nerve head (Figure 1A). There was tentorial thickening with tumor extension medially causing compression and distortion of the right cerebral peduncle and midbrain (Figure 1B). It was labeled as right sphenoid wing meningioma and underwent surgical excision. 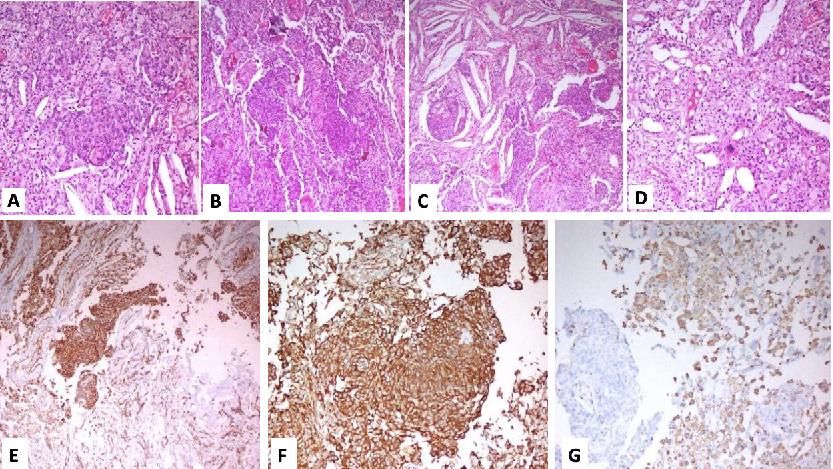 On MRIs of the brain, these metasplatic meningiomas are usually iso- to hypointense on T1 and iso- to hyperintense on T2 weighted MRI. Katayama et al reported evidence of hyperintense lobules on both T1 and T2 weighted MRI images, and hypodensity on CT of the brain in xanthomatous meningiomas. These findings suggest high lipid content in the tumor. 1 Metaplastic meningiomas typically inculcate histopathological features of their transformed tumor subtype. 14 Xanthomatous changes may also occur as primary xanthomatosis in hypercholesterolemia or as secondary xanthomatosis in neoplasm or inflammatory conditions (Figure 2A, B). Xanthomatous meningiomas show focal or diffuse xanthomatous changes in them along with meningothelial tumor cells. Meningothelial and transitional variants often show fat accumulation whereas neoplastic cells in xanthomatous meningiomas are filled up with lipids appearing as foamy cell with cholesterol clefts (Figure 2C). 2 Macrophages surround these neoplastic transformed cells, hence it is essential to carefully establish the origin of these xanthomatous cells. Xanthomatous meningioma does not show inflammation and is different from xanthogranulomatous inflammatory changes. 4

Immunohistochemistry may help in differentiating xanthomatous cells from macrophages. Xanthomatous cells resemble macrophages but show EMA staining, suggesting meningothelial origin. EMA negative cells are believed to be macrophages that have migrated due to tumor degeneration (Fig 2E,F). 6 High CD68 expression could also be a characteristic feature due to abundant intracytoplasmic lysosomes in these malignant cells (Fig 2G). 4 Furthermore, desmosomal and hemidesmosomal junctions, which create a “jigsaw puzzle” between adjacent neoplastic cells is highly suggestive of meningothelial origin of xanthomatous cells. 2, 15 In these tumors, xanthomatous areas stain negative for glial fibrillary acidic protein (GFAP) and stain positive for adipophilin, an antibody suggesting the presence of cytoplasmic lipid granules. 9

Although exact pathophysiology behind these tumor is not known, Ishida et al. suggested metabolic abnormality in tumor cells resulting in xanthomatous changes. 9 Ijiri et al reported radiation associated xanthomatous meningioma in a 10-year-old-boy who received radiation for intracranial ependymoma at the age of 2 years. 11 Taraszewska et al reported rare xanthomatous phenomenon in atypical and anaplastic meningiomas. 15 Wong et al suggested that instead of actual histiocytic metaplasia, degenerative processes in tumors itself result in these xanthomatous changes. 2

Xanthomatous cells originate from meningothelial cells as shown by the immunohistochemical profile of the cells. It suggests true metaplasia of neoplastic cells into xanthomatous cells. Macrophage migration into tumor is due to the degenerative/inflammatory process within tumor cells, and its distinction from xanthomatous cells is crucial for the correct diagnosis and timely management.